Boston’s Paul Pierce celebrates a basket by his Celtics teammates in this file photo. Pierce will be returning to Allen Fieldhouse for the Legends of the Phog exhibition game on Sept. 24. 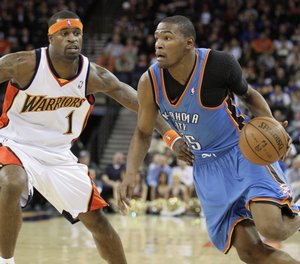 ex-longhorn Kevin Durant, right, drives against Stephen Jackson in this Jan. 21 file photo in Oakland, Calif. Durant led all Big 12 products in the NBA in scoring this season at 25.3 PPG.

Who is the Big 12's best NBA player right now?

Together, Kansas University and Texas make up nearly half of the Big 12 players currently playing in the NBA.

It makes perfect sense when looking at the last four seasons of Big 12 hoops. From the 2005-2006 season to the recently completed 2008-2009 season, Kansas and Texas have, between them:

• Faced each other in the Big 12 tournament title game three of the past four years.

• A national championship, three Elite 8 appearances and a Sweet 16 appearance.

Don’t expect the power to shift any time soon. No. 1 will likely be the only preseason ranking given to the Jayhawks by any publication next year. ESPN.com’s Andy Katz has UT trailing closely at No. 4.

But what about the rest of the conference?

After KU’s 11 NBA players and UT’s eight, only Missouri (four) and Oklahoma State (four) even come close. And, well, it’s not really even that close.

Texas A&M and Kansas State have three NBA players apiece, while Nebraska (two), Iowa State (two), Colorado (one), Baylor (one), Oklahoma (one; not for long, though) and Texas Tech (one) round out the conference.

Mr. Big Shot (17.7 points, 6.4 assists) would be an ideal fit for any team at point guard. Best trade in the history of the Nuggets franchise? Acquiring Billups for Allen Iverson.

The Truth (20.5 points, 5.6 rebounds) is the Big 12’s most polished NBA player. This would be a super-experienced backcourt with Pierce and Billups both winners of an NBA championship.

Durant, easily the Big 12 player with the highest ceiling, improved his play in just about every category this season. Durant just completed his second year in the league. His points per game improved from 20.3 to 25.3; his rebounds from 4.4 to 6.5; assists from 2.4 to 2.8; free throws made from 4.9 to 6.1; FT’s attempted from 5.6 to 7.1, which proves he’s becoming more aggressive.

Gooden’s becoming quite the journeyman (Memphis, Orlando, Cleveland, Chicago, Sacramento, now the Spurs), but his 11 points and seven boards per game are solid.

Aldridge is finally becoming the force the Blazers thought he’d be (18.1 points, 7.5 boards). He averaged just around those numbers in six playoff games this year as well.

Four of these five are Jayhawks or Longhorns. Sounds about right.

not sure Drew deserves it...... not sure i like moving down the reigning NBA finals MVP for a second year player...... and we are leaving Kirk Off

I based a majority of my first team on realistic positions. Durant's never been a 4 in his pro career and actually started out his career in Oklahoma City as a 2, before they moved him to the 3 this year. And I love Darnell as much as the next guy, but Darnell over Gooden on your second team?

I'm surprised Chalmers isn't on there anywhere, he had a very solid rookie season.

Yates, nice list. My only tough decision was the 4 spot. Beasley over Gooden long-term, absolutely. I chose Gooden just based on this year. Beasley looked brilliant at times, but raw at others. Next year, if we come back to this exercise, I bet Beasley makes my first team.

Drum, those are pretty fascinating numbers. Your final tally leads to my poll question of the Big 12's best player...Durant or Pierce.

E-Sorr, don't listen to all this Tom Foolery. You nailed it. Trying to squeeze Kirk Hinrich into the starting lineup is a little too heart-stringy of a move. The four is the only spot that's not definitive. Gooden's had a better career (mainly based off tenure) than Beasley, so he's the better pick. Collison could maaaaybe get consideration, but Gooden is better.

No one else comes close to breaking up that starting five.

Did I just read the Morris twins and NBA in the same sentence? OK that's the funniest thing I've read all morning.

Would you have believed Darnell would be in the NBA after his freshmen year? Give em a couple more years and at least Marcus will be ready for the league.

Eric good article. You're right, there is more to come especially considering what is in the pipeline for both teams in terms of the recruits incoming the next two seasons, combined with the players currently on rosters.

As good as the Billups trade has worked out for the Nuggets, I'm not sure if this is the best trade in their history. I would have to rank the Dan Issel trade number one from the Kentucky Colonels via the Baltimore Claws? Issel scored over 27,000 points in his ABA/NBA career.

Good information Eric. Of course, the glaring absence of any centers in all of these lists is worrysome. The only Big XII Center ranked in the top 10 on drum1984's list is Nick Collison. Meanwhile, T.J. Ford is 5th on that list, but he closed out the season riding the pine behind Jarrett Jack and Brandon Rush... Rush meanwhile closed out the season scoring double figures in 12 of the last 13, averaging 17 pts per contest. That's good enough for the starting 2 position on an all conference team when you look at the 2 guards from the Big XII playing today.

Interesting B12 input...But frankly there's no comparison when you look at the best all time B12 players in the NBA right now. There's no contest:

These all have one common denominator: EXPERIENCE (i'd have them play any team in the NBA right now and would love to see the outcome)

None of the others have been in the NBA long enough to even hold a candle to any of these guys!! Give the 1-2 yr B12 NBA players another two years and they'll be ready to compete with these individuals. Wow! What NBA coach would refuse the above guys on their rosters!! LOL

Everybody can laugh all they want about the idea of Marcus Morris in the NBA. But kubolla09 is right. Marcus will get drafted. And probably very high. Remember the NBA drafts on potential. And very few big men have his skill set. He has a good mid-range game and is an excellent ball handler for a big man. If he shows the kind of improvement over the next two years that he showed during his frosh year, he will be a lottery pick after his junior season. I'll guarantee that.

I would pick Collison over Gooden. Collison defends his position. The Big 12 will have a good center in the NBA next year or the year after when Cole Aldrich goes. Didn't Lamarcus Alridge play center at Texas?

I think I agree that Collison should be on the team instead of Beasley, but Beasley has way more tools. He has had trouble adjusting to not being the man at Miami. If I were Chalmers I think I'd hate to play with Wade. I like Collison a great deal. I wonder why OKC doesn't get a center and use Collison at power forward?

yes, Aldrich will be an NBA center if he bulks up. Aldridge was a center at Texas and has played Center when the trailblazers starting centers have been hurt. He's undersized though due to his frame. He is listed by the NBA as a Power Forward, while Greg Oden is the starting center in Portland.

I chose Darnell over Drew on intangibles.....

Darnell will play SOLID basketball.... Drew will Play Athletically but will be a bonehead. You have three SOLID scorers in dj booby and the beas..... down load you ned people to clean up their misses......

As for Durant playing the 4..... DOn't you think it's round about time a 6'11 guard gets eliminated from basketball.... considering that NO ONE is posting him up..... You can sit out on the perimeter and shoot all you want... but when i hear over the intercom.....

It makes me wanna grab stilts and play GUARD !

and what about the NBA big 12'ers that never lived up to their potential via injury.....

couldn't any of those guys be on this list ( possibly starting ) other wise......

i tend to look at situation when factoring in...... when durant is 6'9 215 ( yes 215 after two years of NBA "conditioning" he's got the body of markieff Morris..... ) would BOMB over anyone at the two position because they average between 6-3 an 6'7 depending on the team and the player against he's playinig.....

Kirk shoots a worse percentage by .14 percentage points.... but creates more turnovers and defends the positions better..... with less oppurtuniotes from the field because he's now benched behind a team of Combo guards......

Look for Brandon Rush to start moving up this list next year. The Pacers' brass here in Indy all love his game. I got to go to a couple of the games he started down the stretch. One thing was very evident. The Pacers are a much better defensive team when he's on the court. He was also showing a lot more confidence on the offensive end. Combine all that with the fact that we don't know when Mike Dunleavy will be close to 100% and Brandon should be an integral part of the team next year.