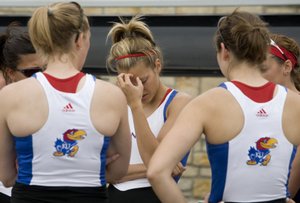 Kansas rower Lindsey Lawrence, First Varsity Eight, holds her head in her hand after Kansas dropped out of second place into third after the First Varsity Eight race during the Big 12 Championships on Saturday, May 2, 2009, at Wyandotte Co. Lake.

Kansas City, Kan. — Had this been baseball, Rob Catloth could have burst from the dugout, kicked some dirt and not-so-subtly voiced his displeasure face-to-face.

Had it been pro football, he could have flipped a red flag into the air, ordering officials to re-evaluate their initial ruling.

But as it happened, this was collegiate rowing, and when a controversial judge’s decision altered the final race of Saturday’s inaugural Big 12 Rowing Championships at Wyandotte County Lake, there was approximately a mile of water between KU’s rowing coach and race officials.

Not the best venue to dispute a call.

“No, it’s not,” said Catloth, whose team finished third overall in the three-team competition, behind winner Texas and runner-up Kansas State. “I talk to football coaches, and they say, ‘How do you do that?’ You can’t call timeouts, you can’t do substitutions, you can’t storm the court and yell at the officials.”

As a result, Catloth was forced to live with the decision of officials to stop the First Varsity Eight race in the middle of what looked to be a promising performance by the Jayhawks.

Just past the 500-meter mark on the 2,000-meter course, with KU still in contention, officials halted the rowers after determining a wake from a nearby observational boat had crossed the racers’ path, creating an unlevel playing field. In what was later described by Kansas rowers as an uncommon move, the teams then were returned to the starting line, where, after an eight-minute break, the race was restarted.

It was clear from the start of the second go-round, however, that KU had lost something.

The team quickly fell into third place, behind Texas and eventual winner Kansas State, and wasn’t able to recover, finishing in 7:05.3 — almost 21 seconds behind the Wildcats.

The third-place finish dropped KU, which entered the race in second place in the overall standings, to third.

“We really let (the restart) affect us a lot more than the other teams did,” said senior rower Emily Martin, part of the First Varsity Eight team. “We had a really good start in the first race. When we came back for the second start, we didn't put it together like we did the first time.”

Said Catloth, “In a varsity race, that’s stuff you’ve got to overcome.”

The Jayhawks’ best performance of the day came in the Varsity Four, which placed second behind Oklahoma — a team that competed in Saturday’s championships despite not fielding a complete team.

Saturday’s championships marked the team’s final competition until the South-Central Regional, which takes places May 16-17 in Oak Ridge, Tenn., and Catloth left Wyandotte County Park on Saturday looking fairly pleased with the total effort of his team .

“A lot of the outcomes (today) were pretty close to what I anticipated. I just thought we’d be a lot closer in the varsity race,” he said.