Kansas pitcher Valerie George gets a high five from catcher Elle Pottorf after George struck out a Texas A&M batter to end the second inning Thursday, April 30, 2009 at Arrocha Ballpark. 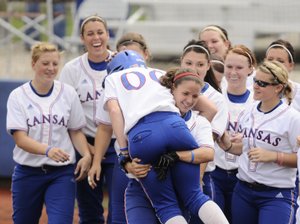 The winningest coach in Kansas University softball history picked up a 4-1 victory Thursday against Texas A&M.

The first questions were easy.

The ones about the wet playing conditions and the tremendous pitching effort and her team’s late-season surge? Kansas University softball coach Tracy Bunge could handle those easily enough.

It was when talk turned to the significance of her team’s 4-1 victory over visiting Texas A&M on Thursday — what will be her final game at Arrocha Ballpark — that proved a little too much for the coach to bear.

“Obviously I have a lot of strong emotions,” said a teary-eyed Bunge, who announced last Friday that she’d be stepping down after 13 years as Kansas’ head coach. “But first and foremost, I’m happy for this group of kids. Obviously it’s been a struggle for the most part this year, a lot more downs than ups early in the year, and I’m really happy that they’ve put it together.”

Thirteen years after coaching her first game for the Jayhawks, an 8-3 victory over Illinois-Chicago, Bunge left Arrocha Ballpark in memorable fashion, pulling out a win against an A&M team the Jayhawks hadn’t beaten in their previous 14 tries.

While Thursday’s game was memorable for a lot of reasons — it was the final home game for the team’s five seniors, for one — it proved especially meaningful for Bunge, who led Kansas to the NCAA Regional tournament four times during her career.

And the importance of sending the coach off with a victory wasn’t lost on the team’s players.

“We didn’t really discuss it,” said senior pitcher Val George, “but that’s kind of in the back of everyone’s mind.”

The Jayhawks did most of their damage in the third inning Thursday, putting three runs on the board thanks to a Kolby Fesmire home run — the first of her career — and a two-run single by Amanda Jobe.

Rhiannon Kliesing’s home run in the top of the fourth pulled the Aggies to within two, 3-1, but George held A&M hitless the rest of the way to improve to 10-14 this season.

“Last year, A&M beat the crap out of us,” said George, who gave up just two hits and a run. “And we all had a little fire in our belly about that.”

The win pushed the Jayhawks to 6-9 in the conference (21-28 overall) and proved a big step forward in the team’s quest for a postseason berth.

It also marked the end of an era for the longest-tenured coach in the history of the softball program.

Despite the emotional undertones of the day, however, Bunge insisted afterward that the focus now remains on going to Ames, Iowa, this weekend and taking two games from Iowa State, a team that — like Kansas — has been playing its best softball at the end of the season.

“That’s the challenge that this group has (ahead of it).”