Frank DeSalvo, associate vice provost for student success and chair of the National Collegiate Athletic Association self-study, leads a panel in a town hall meeting Monday afternoon in the Kansas Union. The meeting focused on an internal report completed by KU and its athletic department.

About 30 people questioned KU officials on a proposed $25 million Olympic Village for its soccer, softball and track squads. 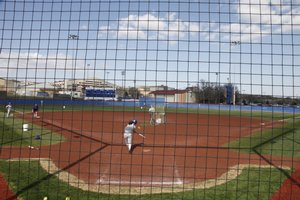 The Kansas University women’s softball team practices at Arrocha Ballpark on Monday while, across campus, university and athletics officials met with the public to discuss a plan to build an “Olympic Village” sports complex at KU.

About 30 people listened as university and athletics officials described a Kansas University Athletic Department that was strong but had areas for improvement.

A town hall meeting Monday afternoon in the Kansas Union focused on an internal report completed by KU and its athletic department. Many of the questions from the audience focused on an Olympic Village for softball, soccer and track facilities planned south of Anschutz Pavilion.

Most of the questions on the Olympic Village were too specific to answer completely, as plans are still in the very preliminary stages, athletic department officials said.

That said, the athletic department plans to consider several items raised by the public, including the orientation of a potential new track for wind angles, the amount of light generated by new facilities and landscaping along 19th Street.

Plans for the track facility include 5,000 permanent seats, along with 5,000 temporary seats to be added for the Kansas Relays and other events.

Fundraising for the $24.6 million Olympic Village is ongoing from private sources, and the facilities will address a gender equity issue in the department’s facilities for men and women that has been cited for years by an outside consultant, said Associate Athletic Director Jim Marchiony.

He said some facilities, including a new boathouse for women’s rowing and locker rooms for other women’s sports, had helped address the issue, but other discrepancies remain.

One questioner asked whether a true symbiotic relationship exists between the athletic department and the university as one entity proposes major capital improvements and the other braces for budget cuts, even though they have markedly different funding streams.

Chancellor Robert Hemenway said much of that issue is tied to the role of athletics in American culture.

“A lot of things we talk about in athletics are part and parcel of the nature of the society we live in,” Hemenway said. “There’s not a poetry page,” in the local newspaper. “The reason that there’s a sports page is that’s where the demand is.”

Panelists fielding questions included Hemenway and Marchiony, who joined several other associate athletic directors and faculty members who worked on the report, including Frank DeSalvo, associate vice provost, who served as the chairman of the steering committee who created the report.

Athletic Director Lew Perkins had intended to be present, athletic department officials said, but could not attend because he was accompanying the women’s basketball team to New Mexico, where the team was playing in the quarterfinals of the Women’s National Invitation Tournament.

DeSalvo and others on the committee praised the department for its focus on academic standards; all teams meet the minimum requirements set by the NCAA after plans to raise academic performance in football, women’s basketball and baseball were executed.

DeSalvo said the department is currently working on a plan to improve performance in men’s cross country and track and field after the internal study found academic performance slipping, though above NCAA standards.

The report also compliments the athletic department for increasing the rules compliance staff from one person in 2000 to five people today.