KU vs. New Mexico in the WNIT 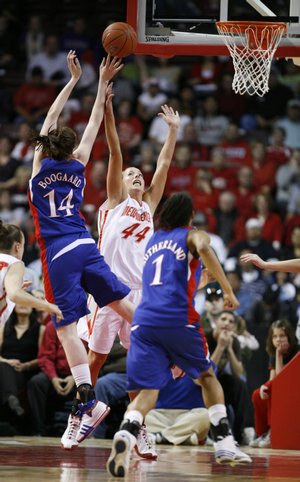 KU defeated New Mexico in the Elite Eight round of the 2009 WNIT in New Mexico on Monday, March 30.

Rio Rancho, N.M. — Suddenly, the team that couldn’t win on the road is headed for the WNIT Final Four.

With only one victory in an unfriendly arena since Christmas, Kansas University went into a New Mexico snake pit on Monday night and stunned the Lobos, 78-69.

“It was a good, tough, gutsy win in a tough environment,” KU coach Bonnie Henrickson said.

An announced crowd of 5,620 — the largest to watch a WNIT game this month — often turned ugly, often booing the referees and throwing ice, small objects and trash on the floor afterward.

The heavily pro-New Mexico crowd in the Santa Ana Star Center was livid because Kansas went to the free-throw line a whopping 36 times, converting 26.

Henrickson, of course, had a different slant on the Jayhawks’ three dozen trips to the foul line.

“Credit the kids for getting there that much and being aggressive,” Henrickson said.

By winning its third straight tourney game — and for the eighth time in the last 10 games — Kansas (21-13) earned a berth in the WNIT semifinals.

The other Wednesday semi will send South Florida (25-10) to Boston College (23-11). The championship game will be at 1 p.m. Saturday at the site of one of the two Wednesday victors.

Kansas was led, as usual, by Danielle McCray, who recorded game highs in points (32) and rebounds (9).

“McCray is in a different class,” UNM coach Don Flanagan said. “We tried everyone on her except Val (Kast), and it didn’t even slow her down much.”

McCray, a 5-foot-11 junior, said she was motivated by the large, raucous crowd.

“I like the pressure,” she said. “And I like being under pressure. I knew it was loud, and the only way to make the fans be quiet was to knock down a shot.”

Sutherland and Boogaard snatched seven rebounds apiece as KU forged a 39-33 advantage on the boards.

“Krysten gave us great one-on-one stuff inside,” Henrickson said, “and Aishah did as well.”

In addition to its steady parade to the foul stripe, Kansas shot 49 percent from the floor (24 of 49).

“I think we scored or got fouled every time against their 2-3 zone,” Henrickson said.

Kansas sprinted to its largest lead (41-31) early in the second half, but the Lobos battled back, four times closing within two points — the last time (66-64) with about six minutes remaining.

New Mexico stumbled the rest of the way, however, missing six of its last eight shots and turning the ball over three times. Overall, the Lobos wound up shooting just 35 percent (22-63), but were able to hang with the Jayhawks by nailing 21 of 24 free-throw attempts.

The three-woman officiating crew whistled 45 fouls — 26 against New Mexico and 19 against the Jayhawks — that led to the 50 free-throw attempts.

When it was all over, Kansas was the team that survived and advanced.

“Everyone deserves to win this time of year,” Henrickson said, “and it comes down to who’s determined to win.”

Good to have someone still hooping it up, great job ladies!

Great road win by the Jayhawks! This program is really coming along and it is great to see double-figure scoring by four players.

Anyone who listened to the game could hear how loud the New Mexico crowd of 5,600 was. We need a crowd like that Wednesday night in Allen Fieldhouse! KU is supposed to be a basketball school - let's prove it!

Nice work ladies. Keep it up.

Way to go Ladies and let's get double what New Mexico had in AFH on Wednesday!!!

The game was great. The crowd was loud at times and I hope that Lawrence is able to get 10,000 this Wed. McCray did a great job of silencing the crowd when they did get rowdy. Thank you to the 50 or so fans that showed up wearing blue. It is always good to see support on the road.

Who would have thought it would be our women still playing in April? Very cool.

danielle mccray is honestly one of the best womens players ive ever seen, she shoots, rebounds, penetrates, kicks, can bring up the ball. She is a totally complete player and one of the five best players in the history of KU womens basketball

Absolutely, Phillbert, the Lady 'Hawks should be filling the stands--a class act all the way. My Lobos fought hard and even with a 5,600-strong 6th man, it wasn't enough. So congratulations again and keep it rolling. We Lobo fans are used to big, noisy crowds at every home game, and your team definitely deserves at least that many every single home game. Now, send those Redbirds packing!

Cmon KU Athletic Dept. Fill the stands for Wed. night game. You can do it......spend some time and effort thinking about the Lady Jayhawks. They are still playing!!!!!!!!!!!!!!

Ok Jayhawk fans, let's get a huge crowd there tomorrow night and we just might be selected to host the championship too!!! Let's make it possible...we need many many students there to be loud!!

I'm working every contact I have to get folks there on Wednesday ...

I was trying to find a bracket for this tournament and couldn't find one. Does anyone know where they are? Don't they determine home court by who has the higher seed?

It will be interesting to see how many people show up. It is easy to get on here and ask everyone to show up and support the team but will people actually commute to come to a Wednesday night KU Women's game? Hopefully, but I'm not going to hold my breath.

Here is the bracket for the tournament. They don't do seeding and host is by who they think will bring in more money/revenue (attendence).

From a long time Lobo fan who attended the game, congratulations to the Jawhawks on a tough fought game. We in Albuquerque are very proud of the Lady Lobos and what they achieved this season. I personnally want to apologize for the small number of individuals who put a bad light on a great night of basketball. They do not represent Lobo Fans.

Good luck as you continue into the WNIT.

OMG. Is this happening?

Oh please, oh please, oh please let this be the beginning of a great women's program. We only lose one starter next year, in Catic. And bring back seniors-to-be McCray, Jacobs, Morris, Weddington. Add young stars Sutherland and Boogard. How exciting!

Special early congrats to my fellow Olathean McCray. Tied for 15th in the country in scoring. Shooting an unreal 58% from the arc (66 of 114). Whoa!

Forgive me if I'm off on any info or stats. It's almost impossible to find women's basketball statistics. ESPN doesn't even post them. LJW? A little help here? Anyone else know where to get them?

Jayhawk Nation! What else could possibly be more entertaining this Wed. than filling up AFH to the rafters for a KU basketball game? Man I wish I could be there.

Ah. Found the stats on Yahoo.

And I forgot to list '09-'10 returnees Nicolette Smith and Kelly Kohn. That's 8 of 9 players who averaged over 13 minutes a game, returning. And is Goodrich coming back?

Hey, is the men's team gonna be there? They should be. And bring the news crews with them. This is a great story, and I hope it continues into next season with both men's and women's programs in the spotlight.

Huge Congrats to the Lady Hawks on playing into April!

Good game ladies! You all played on great game. I was there to cheer you on

Hey you KU fans, do a little research on how Don Flanagan built the UNM women's program from 40 people in the stands to 8,000+ per home game. It is possible and if the fans posting here are any indication of the KU community, you have everything you need to start. So fill up the arena and support the wonderful team you have--you guys have a class act, so let them know it! Go Lady 'Hawks!

One more thing, KU fans--how can I listen to your game against Ill. St? Is there a stream, online, anything? Thanks.

KLWN 1320 is the flagship in Lawrence.

Try their Websites, but I can't promise anything.

Thanks. Have a great game and I hope to be listening.