A few lucky Kansas University basketball fans made the pilgrimage to Indianapolis to watch the Jayhawks take on Michigan State in Friday's Sweet 16 matchup. 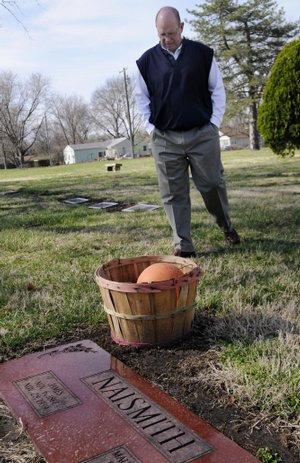 Randy Towner visits the Lawrence Memorial Park gravesite of James Naismith, the inventor of basketball, Wednesday, March 25, 2009. Towner used to run with a group including KU coach Roy Williams, who would often stop by the Naismith gravesite for a little luck before KU basketball games.

It’s do or die for the Kansas men’s basketball team.

As the Jayhawks head to Indianapolis for their Sweet 16 matchup against Michigan State on Friday, it’s prompting superstitious fans to pull out their strange traditions.

“I know people all over town, who do the craziest of things,” said Anne Buhler Dillon, Lawrence native and conventions marketing manager for the Lawrence Convention and Visitors Bureau, 402 N. Second St.

Many faithful fans try to bring out good luck vibes at Memorial Park Cemetery, 1517 E. 15th St., by visiting the grave of James Naismith, the inventor of basketball and KU’s first basketball coach.

That’s where Tom Tucker, of Lawrence, placed a peach basket with an old basketball inside before the NCAA tournament began. The avid Jayhawk fan couldn’t resist the gesture, especially since he did the same thing last year.

Visiting the cemetery was a longtime tradition for former KU coach Roy Williams and a group of his jogging buddies, who said the grave visits brought good fortune about 90 percent of the time.

“We did it a lot of game days, but the ones where we were really serious about it, were the big games,” said Scot Buxton, of Lawrence.

Williams, Buxton and up to six other men would start at KU’s Memorial Stadium, jog to Naismith’s grave and sometimes they’d also visit Phog Allen’s gravesite, across the street at Oak Hill Cemetery, 1605 Oak Hill Ave.

On occasion, they’d jog to the Kansas River Bridge and spit in the river. Other times they’d jog over and kick the large buffalo statue along Clinton Parkway in West Lawrence. And sometimes Williams just wanted to go it alone.

It just depended how severe the opponent was and “what needed to be done,” said Randy Towner, who was also a part of Williams’ superstitious good luck group.

“Mostly around basketball season, they’ll be placing little basketballs (and) trinkets on his grave,” Young said.

“He lived and died in this town, and we’re pretty proud of that and think it’s a great opportunity for people here in Lawrence, as well as visitors to come and see what we’re all about,” Dillon said.

If the Jayhawks make it to the Final Four on April 4, Dillon said a group of Jayhawk diehards plan to visit the grave the morning before, where they’ll raise their coffee cups and give a cheer to Naismith.

“I would warn people that if you haven’t done it in the past, they don’t want to be jinxing us,” Dillon added.

What about Phog's grave? I thought Roy jogged by both on his routes.

I've worn the same t-shirt since the first game last year...has a stain from a very dark, and apparently semi-toxic, beer from the Upstream in Omaha.

I wear my Jayhawk golf club head covers on my hands like puppets during the games. I feel pretty confident that I'm helping. Hahaha.

I have a small plastic basketball about the size of a softball that was being given away downtown by Park 25 Apartments during the 2002 tournament. It cannot touch the ground during big games. If we're down, the ball must be bounced off the wall for each point we trail by during commercial breaks and never be dropped.

I have an old 80's shirt from the Larry Brown era that I wore through much of last year's tourney run. It is ill-fitting and deteriorates every time I wash it, but, if it gives the 'Hawks luck, I'll do whatever it takes and I'm sure it will be worn this weekend. Even non-KU fans appreciate it's vintage qualities. I've done many things through the years...drinking out of a certain coffee cup on game day, sitting in certain spot on my buddy's couch throughout the tourney, and, like jwliddell, I've experimented with drinking myself into oblivion as the 'Hawks need to rally a comeback. I've given up brackets after I correctly predicted Georgia Tech beating KU in my "real" bracket. I still remind myself from time to time that it doesn't really matter what I do...but I'm never fully convinced.

I have to wear my Paul Pierce jersey and sit very close to the TV in my daughters princess chair... I don't like it but I'm afraid not to...

During the championship game in 2003, my brother and I traded shoes at halftime ala Keith Langford.

That one didn't work.

I never wear a KU shirt during games anymore. Bad luck. In 2003 I wore a plain red shirt every game until the damned game against Syracuse and ... well ... not again.

On a slightly related note to this story, isn't "Tom Tucker" the anchorman on "Family Guy"?

My sister in law and myself have balanced baby blocks on our heads during games and will not let them fall to the ground. Also we have put x-tra long tube socks on our hands and wear them around like sleeves!! I used to think we were weird but feel a little bit relieved after reading about others superstitions!!

Before every game this year I go to the Presto Gas Station and get a 20oz Cherry coke and 20 mins before a game I have to smoke a cig and then I cig at halftime that is my tradtion and I have been doing it since last year!!! Rock Chalk Jayhawk!!!

I wear a KU shirt during the game and send positive universal thoughts to the KU team and thoughts of vomit and diarrhea to the opposition.

I'm still waiting to see my opposition thoughts pay off during the game.

i like to stay fluid if we are losing i move around change seats, sit up, lay down, and once we make a comeback i dont move unless required. also sometimes i have my computer up during games and it seems if i start to not watch the game we start to slip so i stop what im doing and give the game my full attention. no jerseys no predictions. does anyone else feel like when they get to see the game in real time just watching it feels like you can will the game in your favor? we dont lose often but i would say 80% of our loses i havent been able to see the game for some reason

Used to be, if the Jayhawks were struggling, I'd turn it off for a while. It seemed like they would settle down and play better if not so many were watching... but I have missed so many games this year that I just stick it out and offer my free advice to them anyway...

Darned if they didn't manage to win the Big 12 and get to the Sweet 16 without THAT much of my help. Coach of the Year, Big 12 Champs, picked to finish 4th in the Big 12!

ROCK CHALK ALL THE WAY, Jayhawks!!!