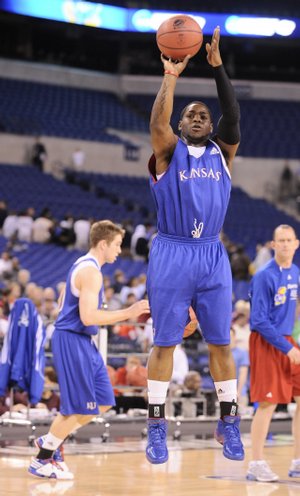 Indianapolis — Mike Earhart is back for some redemption.

The last time he came to Indianapolis to cheer on the Kansas Jayhawks was 1991. That didn’t turn out so well, as KU lost to Duke, 72-65, in the national championship game.

“I thought for sure we were going to win it all that year,” the Washington, Kan., native said.

After making the 11-hour drive from Kansas to Indianapolis, Earhart was back in his KU gear on Thursday, one of many KU supporters to take in the Jayhawks’ practice at Lucas Oil Stadium.

Earhart, who manages a call center in Junction City, was cautiously optimistic about the Jayhawks’ chances Friday against Michigan State.

“If they make it to the Elite Eight, I think that’s got to be a pretty good season,” Earhart said. “It’d have to be something awful special for them to make it all the way.”

Chad Renbarger, from Fishers, Ind., decided to make it a “daddy-son day” watching the Jayhawks.

Jay, his 3-year-old son, spent quietly studied the Jayhawks as they went through drills.

Though he’s a Purdue graduate, Chad said he didn’t mind his son cheering on the Jayhawks.

“If he gets a scholarship, he can go wherever,” Chad said with a laugh. “If not, he’s staying in state.”

Chad’s wife, Holly, went to KU, and was friends with former Jayhawk Scot Pollard during her time there. Jay’s great-grandparents — Bud and Bette Lukens — still live in Lawrence.

Chad attended the Kansas-Missouri game at Allen Fieldhouse this year with Pollard and said he usually attended a couple of KU home games per year.

Alice and Tom Eli, also from Fishers, had to make special arrangements to attend Thursday’s practice.

The parents called the school of their two children — 14-year-old Derek and 11-year-old Raegan — and said that the two had doctor appointments.

The family moved from Prairie Village to Indiana nine years ago when Tom was transferred with his job in the sign business.

That didn’t stop the family’s passion for KU basketball. During one NCAA Tournament game this year, all four huddled over a computer screen to watch the Jayhawks’ game online.

Derek also has attended KU coach Bill Self’s basketball camp. He has pictures of himself and Self are scattered across his room, and his KU basketball from the camp is one of his favorites.

Tom and Alice are both KU graduates and went to games while they were on campus.

“They’re a lot better than I thought. They lost a lot from last year,” Alice said of this year’s Jayhawks. “For a young team to make it this far is pretty cool.”

Hey Chad, the Kansas regents are looking at giving instate tuition to the children of alumni. So there is a chance young Jay could be a Jayhawk and be instate too!