An architectural rendering of a new track-only facility being considered for the area south of the old football practice facility, along 19th Street. There would be seating for 5,000 people. Total costs of the track facility would be about $8 million.

There could be a new look for several sports fields just south of Allen Fieldhouse. 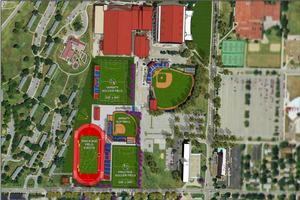 As part of an athletic certification process, KU on Monday released documents, plans and drawings its accumulated over the past 10 years. Among the documents released were a 2008 plan for an Olympic Sports Village near where the baseball and softball fields are currently located. These photos were in that plan.

Kansas University Athletics Department has a master plan to create a $24.6 million Olympic Village in the area south of Anschutz Pavilion.

The Athletics Department released a draft of a self study Wednesday detailing information on budgets, master plans and many other aspects of its operation, including the Olympic Village plan.

Jim Marchiony, an athletic department spokesman, said that fundraising for the new facilities is ongoing, and it’s an important part of what KU Athletics is trying to do in the future.

The report is part of a NCAA requirement for all Division I programs every 10 years, Marchiony said.

“It provides everyone — faculty, staff, students, the general public — a kind of window to athletics and how it’s run,” Marchiony said.

He said the study serves as a report card on how the department is doing.

KU will collect feedback from the public in a session from 3:30 p.m. to 5 p.m. Monday in the Kansas Room of the Kansas Union.

KU will then finalize the report and send it to the NCAA by May 1. The NCAA will review the report and provide an analysis in July, and KU will have until Oct. 12 to respond.

An NCAA peer-review team will visit campus in late October and issue a report to the chancellor by December, and KU will have a chance to respond. The NCAA Certification Committee will then deliberate and issue a final decision by February 2010.

This looks really great and I assume the the new track is the first step to the eventual removal of the current track inside Memorial Stadium...

Wonder if there are any plans in the works for athlete-housing? Are they still just going to spruce up Jayhawker Towers???

WHo wants to watch the game in Newton with me on Friday!!!

I hope those are Eastern Redbud trees, not actually purple, but more of a violet.

I'll miss the green space on campus...all this building...

I didn't catch if there's going to be any grandstand seating. Did I miss something?

This looks exciting for our other sports teams; I hope! But super dope for Memorial stadium and the eventual lowering of the field for foosball games. I can't imagine how awesome that would look and feel. Hopefully that doesn't change too much for the all important Spring Graduation though. However, here's to being an optimist. Rock Chalk!

mpann1818; all that looks like crap as it is right now sound you won't miss it, trust me.

I do think they are doing this to set up a removal of the track at the stadium... WHICH NEEDS TO BE DONE!