The Jayhawks are on the road to the Final Four. The KU men's basketball team left Allen Fieldhouse this afternoon for Indianapolis. 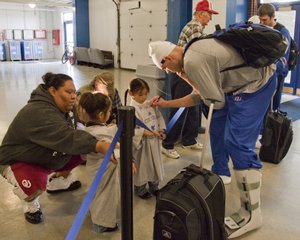 Cole Aldrich signs his autograph on the sweatshirt of 3-year-old Cyrenity Hardy as he speaks on his cellphone and heads out for Indianapolis. 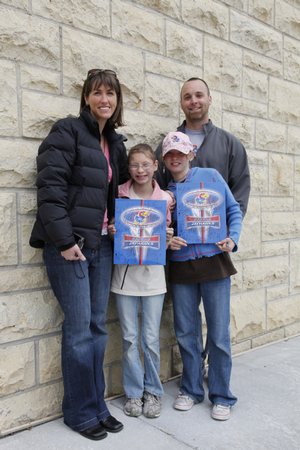 The Graves family, from left, Darcy, Anastasia, Maria and Zac, are visiting Lawrence for a spring break vacation from Denver. Zac and Darcy adopted their two daughters, who are originally from Siberia, after they met at KU and got married. They proudly display the KU basketball player autographs they collected today at Allen Fieldhouse.

Maria Graves nearly tripped as she sprinted to her parents and sister, pink hat clutched in her hands, the black scrawl of Tyrone Appleton’s signature barely legible on the bill.

Before the 12-year-old could fully regain her balance, she slid next to her sister, Anastasia, 10, to grab a signature from Conner Teahan.

The girls greeted each player on Kansas University’s men’s basketball team by name Wednesday as the players loaded the bus for Forbes Field in Topeka for a trip to Indianapolis and the Sweet 16. The Jayhawks face Michigan State on Friday.

Zac and Darcy Graves adopted the girls in May 2007 from Siberia. The Graves live in Denver but met at KU in the 1990s. They brought the girls to visit for spring break.

Though the girls met their favorite team for the first time Wednesday, they’ve followed KU basketball since coming to America.

“They don’t think Kansas can lose at anything,” Zac said. “They’re from Russia and live in Denver, but you’d think they were Jayhawks.”

He said the girls wear KU gear to school, do the Rock Chalk chant and yell at referees on TV.

The girls didn’t hesitate to declare KU the victors of this year’s NCAA tournament.

That's what being Jayhawks is all about. Great family.

They must be good luck for the program since we've done nothing but win since they came to America. Rock Chalk!

Why is Aldrich wearing a walking boot?

stress reaction in his foot/ankle/leg . . . dont really know what reaction means in this case but cole and self dont seemed concerned and say its nothing but a precaution

the boot that is

Thanks Jfan, didn't realize he was still wearing a boot for that.

Great Family that all Jayhawkers can be Proud. GO JAYHAWKS

Too bad they never got to come and meet Sasha! I bet that would have been really cool for him to talk to them in their native language!