LaCheldsa Jacobs goes up in the paint for two points.

Postseason play rolls on for the Kansas women's basketball team. The Jayhawks eliminated Creighton in the second round of the WNIT.

After missing out on the NCAA Tournament, the Kansas women opened up postseason play with a win in the WNIT tourney. 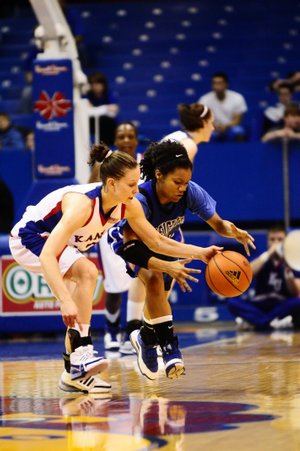 Her name contains 16 letters, but it really takes a 17th to describe Aishah Sutherland.

“She’s our X-factor,” teammate Ivana Catic said. “It’s no secret that when she plays well, we play well.”

Sutherland scored a career-high 15 points and matched her career-high with 12 rebounds to help Kansas spill Creighton, 79-64, in a WNIT basketball game Monday night in Allen Fieldhouse.

Sutherland, the only active freshman on the Jayhawks’ roster, was a zero factor during the first semester. In fact, she never left the bench when KU and Creighton tangled in mid-December in Omaha, Neb.

“Why didn’t she play up there?” KU coach Bonnie Henrickson said. “Probably two handfuls of reasons.”

Mostly, it was Sutherland’s lack of focus, particularly in practice.

So accurate was Sutherland dialing the right number that she logged 32 minutes, tying another career high, while sparking the Jayhawks (19-13) to the most wins they’ve compiled since the 1999-2000 season.

Kansas isn’t done, either. The Jayhawks will take a shot at the 20-victory plateau when they entertain Arkansas at 7 p.m. Thursday in a WNIT third-round game.

“(Sutherland) is long and a little bit stronger than I thought she was,” said Creighton coach Jim Flanery, whose team finished with a 22-12 record.

Sutherland wasn’t the whole show, however. Danielle McCray displayed the form that earned her first-team All-Big 12 honors with 25 points and 13 rebounds, and Sade Morris chipped in with 21 points, just three shy of her career high.

“We really didn’t have a matchup for McCray,” Flanery said.

McCray, incidentally, was guarded mostly by Megan Neuvirth, who was voted the Missouri Valley Conference defensive player of the year. Neuvirth, also an MVC first-team selection, struggled offensively, too, by missing 14 of 17 shots. The 5-11 junior was also charged with six turnovers.

With Sutherland making seven of 10 shots and Morris seven of 12, Kansas shot a sizzling 54.1 percent (33 of 61). The Jayhawks blew it open during the last 10 minutes of the first half when they outscored the Bluejays, 23-6, to post a 38-21 halftime lead.

KU expanded its halftime bulge to as many as 21 points early in the second half before Creighton rallied to close within nine points a couple of times before the Jayhawks pulled away.

“There was a little drama when they cut it to nine,” Henrickson said, “but give our kids credit. We answered.”

Nice job Hawks! Tear it up in round 3!

Great win ladies. Now let's Kill them Wild boars, pigs, hogs, or what ever kind of pork ar-Kansas is.

Great game tonight by the ladies, we should have a decent chance at winning the next game, but like coach said we need everyone to bring three friends to the Fieldhouse on Thursday, attendance was low again tonight with quailty basketball being played. Come out and support the hawks!

I was there ... crowd was decent, but could've been better.

We'll try to make it back for the next game.

I checked the official attendence... I must say... it was quite poor.

1,981 people in attendance. Considering we had well over 7,000 people against the Baylor game on Senior night.

Congratulations, ladies. Four in double figures to go with Ivana Catic's seven assists to one turnover, plus seven points, two rebounds and one block in thirty-three minutes. Nice.

By the way, couldn't find the game on radio. Had to settle for GameTracker. Really too bad about the pathetic attendance (1,981???). The team deserves much better.

I can't begin to tell you how many times in the past I have gotten emails at work during football season, encouraging me to buy more tickets and get more people to come to games. Why is it that our athletic dept. can't do the same thing for the women's basketball team? We play well when we have a crowd. I saw a few student athletes at the game last night. Thanks for supporting your peers! Let's get a win Thursday night!

Great game Ladies! I think this shows how dedicated the University is to the athletic program. Both men and women BB programs are still playing late in the season when most programs are at home thinking about next year. It has abeen a banner year for KU sports!

Great win, I was there. Hopefully more people will show up thursday.

Aishah, though focusing takes some preperation and effort, doesn't it feel goooood? Especially that celebration with your teammates. Keep Rocking & Chalking Ladies!

And don't worry about the attendance. People will come to your games after they realize you're a quality team producing quality performances. Unfortunately, the "after they realize" always, always has about a year or so lag on your performance for most people. It just takes time to develop the momentum necessary to motivate thousands of people. Be encouraged by the old history you can see with men's BB, and even the new history you can witness with FB. You are surrounded by great fans that will come out in enthusiastic throngs - after they realized you are a quality team producing quality performances.