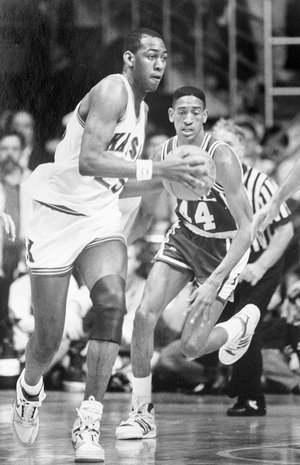 Danny Manning, left, prepares to pass against Duke in a 74-70 loss in Allen Fieldhouse. KU bounced back to beat the Blue Devils in the 1988 national semifinals, 66-59.

Searching 40 years of mental archives from watching NCAA title games — 39 on television, one in person — doesn’t lead to many national champions remembered most for featuring two terrific players.

The last three national champs — Kansas and Florida twice — featured balanced teams that could survive and advance if a couple of starters had off nights.

Talented trios have been relatively common through the years, none better than Grant Hill, Bobby Hurley and Christian Laettner of Duke’s back-to-back national champions (1991-92). More recent examples: Carmelo Anthony, Gerry McNamara and Hakim Warrick of Syracuse in 2003 and North Carolina’s Raymond Felton, Shawn May and Rashad McCants in 2005.

Dynamic duos haven’t been as common among teams that got hot enough in March to win a national title, but a few do come to mind.

In 1977, the Butch and Bo Show, with guard Butch Lee and forward Bo Ellis, spurred Marquette to a national championship in Al McGuire’s final game against North Carolina.

All of those teams surrounded their top two players mostly with experienced players.

For Kansas to defend its national title successfully without any returning starters and just one player who logged more than four minutes in the 45-minute national-title game, scoring point guard Sherron Collins and center Cole Aldrich must play their best basketball while leading freshmen and sophomores.

UConn’s Gordon (18.5) and Okafor (17.6) in 2004 were the last tandem to lead a team to a national championship scoring a higher percentage (46) of their team’s points than Collins and Aldrich this season.

While Collins and Aldrich have led their team during a season that has exceeded expectations, the nation’s most famous high-scoring tandems — Kentucky’s Jodie Meeks and Patrick Patterson, Notre Dame’s Luke Harangody and Kyle McAlarney and Arizona’s Jordan Hill and Chase Budinger — played for teams that underachieved. The danger in relying so heavily on two players in a one-and-done setting is that it requires so much consistency from both players.

In the case of Kansas, the numbers suggest that as one of its two stars goes, so go the Jayhawks. In KU’s 25 victories, Collins hit 46 percent of his field-goal attempts and 43 percent of his threes. In the seven losses, those figures plummeted to 31 percent overall and 26 percent on three-pointers.

For Aldrich, the more shots he gets off, the better Kansas tends to fare. When Aldrich reaches double figures in field-goal attempts, the Jayhawks are 14-1. When he doesn’t, they’re 11-6.

What does it all mean? Collins needs to take high-percentage shots, and either a third scorer needs to emerge, or Aldrich needs to get 10 or more shots.