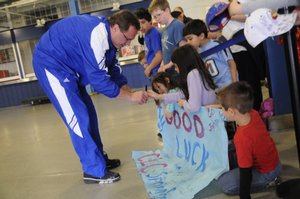 Is it just me... Or did Cole in that video look really focused... I have a feeling he will be ready to play

I think he was listening to some MOTOWN on his IPod.

If you are visiting Minneapolis for the games this weekend you need to know the best place to park when attending the games at the Metrodome.

The MOST convenient underground parking is across the street from the Metrodome and easy to find!

Go to 4th Street and Park Avenue with the entrance off Park and we will have the famous "Parking Girls" out in full force the entire weekend!

Travel Safe and hope to see you this weekend!