Kansas' James Stanfield slides safely into third base during the game against Northwestern on Sunday, March 8, 2009, at Hoglund Ballpark.

The Kansas baseball team played against the Northwestern Wildcats on Sunday. 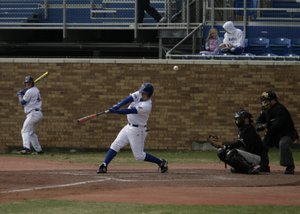 Kansas' James Stanfield fouls off a pitch during the game against Northwestern on Sunday, March 8, 2009, at Hoglund Ballpark.

Since their season began last month, members of Kansas University’s baseball team have openly — and regularly — identified themselves as a group of undersized opportunists.

The team’s success this spring, they are fond of saying, will hinge on the ability to advance runners, to steal bases and to make up for its lack of collective power by carrying out the game’s fundamental finer points to perfection.

But after a week-long barrage in which they recorded seven home runs in the span of four games — including three in Sunday’s 10-1 victory over visiting Northwestern — it’s becoming harder and harder to believe the Jayhawks are truly a bunch of power-challenged small-ballers.

“I think (we’re) just getting back in the groove,” said KU catcher Buck Afenir, who has homered twice since missing the first three games of the season for disciplinary reasons. “You kind of start off slow, pick up with singles and stuff, and then you get confidence in your swing, and you can start swinging a little harder.”

This was certainly the case Sunday afternoon, as the Jayhawks feasted upon an overmatched Wildcats team during a game that concluded approximately 19 hours after it began.

The severe weather that swept through Lawrence on Saturday evening forced the teams to suspend their Saturday night contest — with the Jayhawks leading, 2-1, in the bottom of the third inning — until the following afternoon, a decision that left KU coach Ritch Price with the unenviable task of dealing with a clubhouse full of restless players while the team re-worked its weekend schedule.

“They find a way to amuse themselves — playing fake ping-pong or whatever it is in the dugout,” Price joked. “The hard part is, when it’s time to play, getting them back to refocus. They’re like a bunch of 7-year-olds.”

If the layoff resulted in any ill effects for the Jayhawks, however, they were not readily apparent.

Kansas third baseman Tony Thompson, who was at the plate when Saturday’s game was suspended, ripped a double to left-center field moments after the game resumed Sunday, scoring David Narodowski and Afenir and extending the Jayhawks’ lead to 4-1.

From there, the floodgates opened. An inning later, Afenir hit a two-out solo home run to center field, and Thompson followed with another homer to push the lead to 7-1 and record the Jayhawks’ first back-to-back home runs since May of last year.

Thompson, on a 19-game hitting streak that ties for the fourth-longest in school history, concluded the scoring in the bottom of the seventh with his team-best third home run of the season, finishing 3-for-5 with three RBIs and three runs scored as the Jayhawks improved to 7-3.

Sunday’s game originally was scheduled to be a part of a doubleheader, with the conclusion of Saturday’s game to precede a regularly-scheduled contest at 1 p.m. But due primarily to weather issues, university officials elected to cancel the fourth game of the series.