Kansas pitcher Sarah Vertelka delivers a pitch during the game against North Dakota State on Sunday, March 8, 2009, at Arrocha Ballpark.

The Kansas softball team was locked in a double-header this afternoon. 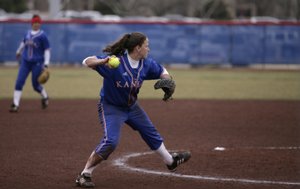 Kansas third baseman Val Chapple gets ready to throw over to first after fielding a grounder during the game against North Dakota State on Sunday, March 8, 2009, at Arrocha Ballpark.

Maybe Tracy Bunge has found the clean-up hitter she has been looking for.

Inserted into the No. 4 slot in Kansas University’s softball batting order, sophomore Allie Clark produced big numbers during the five games of the KU Invitational.

“She’s up there hacking,” KU coach Bunge said of Clark. “It’s not always pretty, but when she connects, she can hit bombs.”

Clark slugged two homers during the three-day meet, including a grand slam, during Sunday’s 12-1 run-rule decision over North Dakota State.

“When I was up, I was just trying to hit it somewhere to bring in the run from third,” Clark said of her slam. “As soon as I hit it I knew that run would score, then I saw it went out, and I said, ‘All right.’”

Clark had also homered Saturday against Northern Iowa. During the five tourney games, she batted .400 with nine RBIs and five runs scored. She went hitless just once, and that was in Sunday’s tourney finale, a 9-6 loss to Northern Iowa.

“She pitched three real good innings,” Bunge said, “but then she started getting the ball up. When she’s in there, she’s usually on or off. There’s not much in-between.”

During this home-opening tourney, the Jayhawks didn’t seem to have much middle ground, either.

Bunge went into the meet most concerned about the Jayhawks’ hitting, but KU averaged 6.2 runs in the five games while compiling a .341 batting average.

“I feel much better about the team offensively,” Bunge said. “Now it’s the pitching. We didn’t get the job done.”

Junior first baseman Amanda Jobe and sophomore right-fielder Liz Kocon both went 6-for-14 (.429), with Jobe slamming a home run and a triple.