Kansas Freshman Zac Elgie, center, accepts congratulations after singling in the seventh inning of the first game of KU’s doubleheader with Northwestern. The Jayhawks swept the twinbill, 9-8 and 7-3, on Friday at Hoglund Ballpark. 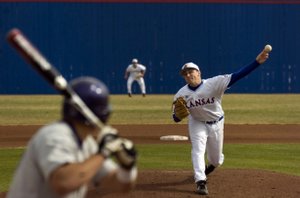 Pitcher Shaeffer Hall releases a pitch to a Northwestern batter in the fifth. The Kansas baseball team started a four-game weekend series Friday with Northwestern.

Kansas allowed four runs in the top half of the eighth to wreck a tie game against Northwestern, then needed five outs in the bottom half to come back. But the end result, while far from a masterpiece, couldn’t have been prettier for KU.

“Obviously, it ended up being a great win,” KU coach Ritch Price said, “because it could have been a devastating loss.”

Kansas hung on for a wild 9-8 victory in Game One and carried that success into Game Two, defeating Northwestern, 7-3, for an afternoon sweep.

“When you’re playing two games, you really want to get that first win of the day and then build off that in the second game,” KU second baseman Robby Price said. “Because in their dugout, it’s the opposite feeling.”

The Jayhawks trailed, 8-4, heading into the bottom of the eighth in Game One after KU relief pitcher Brett Bochy struggled through two-thirds of an inning in the top half. Bochy allowed three earned runs, spoiling a solid 71⁄3-inning outing from starter Shaeffer Hall.

A comeback looked bleak for KU, particularly when Jayhawks left fielder Jake Marasco struck out swinging in the bottom of the eighth for the third out of the inning.

Except that it wasn’t the third out, after all.

The ball bounced away from NU catcher Chad Noble, allowing Marasco to reach and prolong the inning.

And after KU catcher Buck Afenir was hit by a pitch to load the bases, freshman Zac Elgie singled through the left side to cut the score to 8-5 with the bases still jammed.

“That’s what you preach to your guys,” Ritch Price said. “If you get the tying run to the plate, you have a chance to do something special.”

Center fielder Nick Faunce followed with a walk to bring KU to 8-6. Then, NU second baseman Trevor Stevens bobbled pinch hitter Brian Heere’s easy grounder and threw the ball away, letting two more runs in to tie the score at 8.

One pitch later, Faunce scored on a wild pitch for a 9-8 lead.

KU pitcher Paul Smyth tossed a perfect ninth to preserve the comeback and give Bochy the victory.

Elgie’s single proved to be the only base hit of the five-run inning.

“To finally get over there, it felt real good,” said Elgie, who recorded the first two hits of his KU career in Game One. “One of the key things is getting that first one out of the way. When hits come, they come in bunches.”

In Game Two, Kansas picked up where it left off.

Robby Price sprayed a ball to left field that tailed away from incoming left fielder Quentin Williams in the first inning. The ball caromed off Williams’ glove, rolling all the way into the left-field corner and allowing both David Narodowski and Price to score on an inside-the-park home run.

The 2-0 score ballooned to 5-0 thanks in part to a booming two-run homer to left from Afenir in the third inning.

KU starting pitcher T.J. Walz took care of the rest. He retired the first 10 batters he faced before allowing a single to right field.

“I think the momentum that we had carrying from the bottom of the eighth inning carried over,” Walz said.