Kansas forward Aishah Sutherland wrestles for a loose ball with Baylor forward Whitney Zachariason during the second half Wednesday, March 4, 2009 at Allen Fieldhouse. 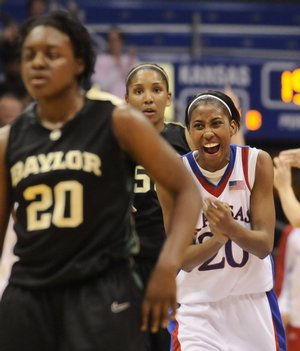 Call it a tale of two Danielles.

McCray was marvelous, making seven of 10 three-point goals — including her first five attempts during a first-half onslaught that left the Bears ladder-less in a 42-17 halftime hole.

“I had the hot hand … everything was going in,” said McCray, a 5-foot-11 junior whose previous high was 30, a total she had reached twice earlier in the season.

“She’s a perimeter player,” Baylor coach Kim Mulkey said of McCray, “and she almost scored as many points as our whole team did. I haven’t seen her a whole lot, but I thought she was very good.”

Overlooked, though, because of McCray’s offensive explosion was Krysten Boogaard. The 6-5 sophomore was a force inside with 18 points and 11 rebounds — totals she conceded she probably wouldn’t have accumulated if Baylor’s Wilson had been playing.

“I think it would have changed the game a lot,” Boogaard said. “But even without Danielle Wilson, they are a good basketball team.”

Wilson, a 6-3 senior who was leading the No. 5-ranked Bears in scoring (15.1) and rebounding (9.6), suffered a knee injury late in the first half of Saturday’s victory over Texas and didn’t play against the Jayhawks.

Without Wilson, the Bears looked lost. They shot dreadfully, making only 16 of 62 shots, a dismal 25.8 percent.

“It takes energy and effort to win on the road,” Mulkey said, “and I didn’t think we got it from some of our players when the game started.”

With the Bears in a funk, the Jayhawks worked the high-low to perfection. If McCray didn’t score from the outside, Boogaard scored inside. The two accounted for 33 of the Jayhawks’ 52 shots and all but 16 of KU’s points.

“It’s a great win,” the KU coach said. “I thought the kids were ready to play. It feels good to be playing well. We have been playing with a sense of urgency.”

Kansas began its four-game sizz after suffering a 69-62 loss at Colorado, the Big 12 cellar-dweller.

“Danielle was in foul trouble at Colorado,” Henrickson said. “It was a crisis. It was terrible.”

McCray logged only 22 minutes that night in Boulder, Colo., and finished with 11 points. But in the four games since, she has averaged nearly 27 points a game.

“I don’t have words for it,” McCray said. “It’s just a great feeling.”

Included in those four wins was a victory over then No. 23-ranked Iowa State, so KU’s mini-streak has some cachet. But enough to earn a berth in the NCAA Tournament?

With a 17-11 overall record, the Jayhawks are a lock for the WNIT, but their sights are set higher.

“We still have NCAA hopes alive,” McCray said. “We’re not thinking it’s over. We’re not giving up.”

The Jayhawks, alone in seventh place in league standings with a 6-9 record, will conclude the regular season Saturday night at Iowa State. The Big 12 tournament will begin a week from today in Oklahoma City.

After Wednesday’s game, Ivana Catic, Marija Zinic and Katie Smith were feted on Senior Night. Also recognized was junior Rebecca Feickert, who will graduate in May and doesn’t plan to play basketball next season.

Yeah! Rock On, lady Hawks! Keep it rolling, and keep the hammer down on that D!

Way to go, ladies. What a great senior night win this would be. Keep attacking, and close this thing out!

Bust it out Bonnie! Foot to the throat.....win the second half.

66-37 at the 4:00 mark. Trying to listen while watching the men. This one is over. Congratulations, ladies!

As for those who were wanting to fire Bonnie earlier in the season? Why the sudden change now? What a shame... fairweathered fans...

Great defense ladies. You controlled the tempo of the game and did not let Baylor get any offensive rhythm the whole game.

One more game. Not over til the fat lady sings.

Never give up, never surrender.

McCray, KU men's needs you! be prepared to be recruited by coach Self! yeah, i wish NCAA would allow men and women from the same college swap players! rock chalk!!

Seems they never got around to posting this story over here on KU Sports...

The girls really made the tough loss in Lubbock more bearable. Keep up the good work ladies.

Danielle McCray ties the most points scored by a Jayhawk in league play since Suzi Raymant dropped 35 on Oklahoma on Feb. 25th, 1998 ...

AND she becomes to fifth woman to make seven 3-point shots in a game, and first since 1996:

The most is eight: Charisse Sampson vs Iowa State on 1/14/96

I tried and tried to find the highest ranked team Kansas has beat, but there's no listing of it in the media guide - I checked, TWICE!

"I tried and tried to find the highest ranked team Kansas has beat, but there's no listing of it in the media guide - I checked, TWICE!"

That tells me that the person who wrote it either doesn't know, or it's never been done before...

Congratulations to Coach Henrickson and the Jayhawks for what is probably the biggest win of her coaching tenure at KU thus far!

McCray was amazing - outscoring Baylor by herself for roughly the first 29 minutes of the game - and Boogaard was a monster inside. For most of the game, KU played as well as they've played all year on both ends of the court and played to the level that a lot of us have known they were capable of.

And while we're celebrating remarkable efforts, we should recognize Rebecca Feickert for graduating in three years with a nearly perfect GPA. She may not get as much playing time, but she spends just as much time practicing, at games and on road trips as a starter, making this academic achievement all the more amazing. Congratulations to her and to Catic, Zinic and Smith, all of whom are perfect examples of what it means to be a true student-athlete.

Great game ladies. I was surprised that Coach did not allow the senior to start the game. But, you cannot fault her. The game started with a good run. Baylor was cold as ice. And the ladies do not allow Baylor to make it a game with an outstanding defensive performance. I was shocked by the outcome, but very pleased.

Considering that we did not have much production from the seniors, hopefully the ladies will work hard, and the new recruits improve the team next season.

LeBo, I read someone that the Sr's told Bonnie not to start us, it was too big of a game. I think it was in the game thread, so it might have came from the radio. Cause I think the last 4 years seniors have started.

There are still NCAA Tourney hopes for this team....even as poorly as they played during the middle part of this season.

Keep in mind these things:

While KU's RPI will not factor into the decision of a bid or not, how many wins they have against the Top 50 and Top 100 will.

A win at Iowa State on Saturday would make KU 7-9 in the #1 RPI conference in the country by a mile, the Big XII.

Not to mention that they have an opportunity to get closer to 20 wins in the Big XII Tournament, most likely opening up with Oklahoma State (who they beat by 15 on the road).

Fans should be justified in their excitement for this team. Even though they probably don't deserve to be in......I am rooting for them to make it. Good luck ladies!

Also makes you wonder what could have been if Angel Goodrich were able to play this year. Finish the reg season strong and get some more post season W's as a springboard to next year.

The Next Game... That's the only thing they need to be thinking about going into the weekend.

Win the last game, get momentum going into the Big 12 tournament.