On Saturday, the Jayhawks got their second crack at Nebraska after falling 67-58 in Lincoln. 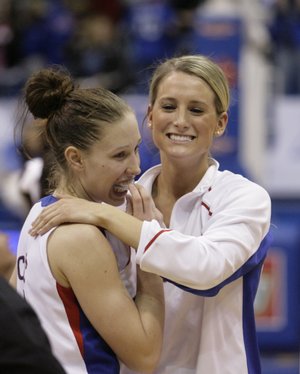 Danielle McCray was solid, as usual, scoring a team-high 18 points.

Freshman Aishah Sutherland came off the bench and contributed 12 points and eight boards.

Sade Morris counted 15 points, including 9-of-10 at the free throw line.

So which of those three Kansas University players did Nebraska coach Connie Yori single out after the Jayhawks’ 70-57 women basketball victory on Saturday night in Allen Fieldhouse?

Answer: none of the above.

“The difference-maker was Ivana Catic,” Yori said. “They got great point-guard play out of her.”

Catic certainly bore little resemblance to the Catic who had scored only 16 points and taken only 13 shots in the Jayhawks’ first 13 Big 12 Conference games.

Against the Huskers, the 5-foot-8 senior launched 10 shots, netted five and scored a season-high 10 points. More important, though, Catic logged 34 minutes on the floor and had just one turnover.

“She’s not a kid who gets you a whole lot of offense,” Yori said, “but she played like a senior who didn’t want her career to end. I thought she controlled the game.”

In the main, Catic performed at the highest level she has all season, even though she declined to call it her best game.

“When I think about having my best game,” she said, “I think of having seven assists, and taking a couple of charges.”

Catic didn’t take any charges and she was credited with just two assists yet, as teammate McCray said, “She was a leader, she brought energy for us.”

And some surprising offensive punch.

“Ivana’s a good shooter,” McCray said, “but she’s more interested in getting another person to take the shot.”

As important as Catic was to the big picture, however, Sutherland was the catalyst during a second-half surge that enabled the Jayhawks to win a third straight Big 12 Conference game for the first time in nine years.

The 6-2 Sutherland, the only healthy freshman on the roster, helped spark an 18-2 blitz that left the Huskers reeling.

“Aishah was obviously a difference-maker in the second half,” Henrickson said. “She made me look stupid for not playing her in the first half.”

Kansas bolted to a 15-2 lead, but then went into funk before intermission when Henrickson had McCray, Boogaard and Morris all on the bench because each had two fouls.

Saturday’s win boosted the Jayhawks’ record to 16-11 and virtually assured them a postseason WNIT berth. With games against Baylor here Wednesday night and at Iowa State next Saturday, KU has an opportunity to post its best conference record under Henrickson.

Kansas is 5-9 in league games and Henrickson’s best league record in her previous four years on Mount Oread is 5-11, a mark she has recorded twice. She was 4-12 in her other two seasons.

“Beat Baylor, that’s what we’re thinking about,” Henrickson said, “because conversation about anything else doesn’t help us.”

Two more to go. You can do it girls, win out, finish strong.

Keep it up ladies! Let's knock off Baylor!

Kickin' butt! Getting this train turned around way to go ladies!

Got to the game with my daughter (KU sophomore). That was a lot of fun for both of us. I'm now officially hoarse. The players signed autographs after the game. I got a couple, Ivana Catic (too bad she's a senior) and Krysten Boogaard, but couldn't hang around long enough for more. There was a pretty nice crowd for that, which was nice to see. It was mainly a chance to offer well-deserved compliments and congratulations.

Good luck, ladies, against Baylor. That'll be tough, but what a feather in the cap opportunity! Nothing to lose. Just give it all you've got.

Thanks for the great effort tonight.

Saturday’s win boosted the Jayhawks’ record to 16-11 and virtually assured them a postseason WNIT berth.

WNIT is ok, but win the Big 12 championship and you get an auto-bid to the big dance.

Cinched best record in 5 years at KU for Coach Bonnie. I am plesantly surprised.

What we need is a new Coach that can win more than 50% of game year in and year out in Big XII..

THree in a row is great, but make NCAA is the target and they will fall short again.

Ivana Catic needs to step up her game and play like she did tonight the rest of the way.

Coach Henrickson needs to be more tactical about how she uses Aishah Sutherland.

Krysten Boogaard needs to get her head in the game and play a little more intelligently.

And they need to work on limiting turn overs.

If all that can come together in the next couple of games, they have a shot at doing well in the Big 12 Tournament. All they have to do is win it and their in the big dance.

Krysten needs to spend the summer in Lawrence in the weight room. Danielle needs to work on her defense. Bonnie needs to start Aishah and let her point guards shoot the ball. Too much over-coaching. Half of each possession is spent with the point guard dribbling the ball at half court.

That being said, GREAT WIN! It was fun to be there.

If they beat Baylor Wednesday, then I believe they have a good shot at making a solid run in the tournament.

And hey, the WNIT is better than no post-season at all (aside from Big 12 Tourney) like they were staring at just one week ago.

Great game girls! Keep it up!

Everyone show up on Wednesday and bring AT LEAST two more people with you!!

McCray - you are my ray!! keep shining and keep the momentum going, gals!!