At far right, from left, Allison Babbit, 5, her sister Katie, 8, and their father, Kevin Babbit, Lawrence, are framed by rowing shells as they pass through a rowing shells bay on the lower floor the new Kansas Rowing boathouse during an open house Saturday at Burcham Park. The facility totals more than 16,000 square feet. 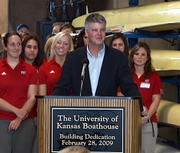 Kansas University rowing captain Emily Martin and her teammates in the past have often left a practice on the Kansas River muddy, freezing and tired.

Thanks to the recent completion of a $6 million boathouse at Burcham Park, the team now has locker rooms, a place to work out inside and much space to store their boats.

“You come here, and you can go home clean after practice,” said Martin, a Wellington senior.

KU and Lawrence officials dedicated the new Kansas Rowing Boathouse during a ceremony Saturday afternoon in front of hundreds of people. It coincided with KU celebrating its 40 years of women’s athletics.

“There’s just the history of women’s sports at KU. It’s a growing thing, and it’s still growing. This is an example of that,” Martin said.

KU’s student body voted in 2005 for a student fee to fund the building, designed by Peterson Architects of Cambridge, Mass., and Treanor Architects of Lawrence. Lawrence-based First Management Inc. constructed the 16,000-square-foot building that sits a few feet from the Kansas River.

“Just the buzz around it, and the excitement with the team,” coach Rob Catloth said. “I think they’re just all really amazed at it all.”

“This is a fitting tribute to women’s athletics at KU,” Chancellor Robert Hemenway said.

KU Athletics Inc. reached an agreement with the city to construct the building at Burcham Park. Mayor Mike Dever said the boathouse will help add to the development of the area.

“For me personally, this is the most satisfying building that I’ve ever been involved with,” KU Athletics Director Lew Perkins said. “This is something that’s been way, way, way, way overdue.”

Catloth, who started rowing at KU as a student in 1980, said the boathouse would benefit both the women’s team and the men’s club team. The building also has spaces built in to help develop a community rowing program.

Several rowing alumni, along with hundreds of other people, attended Saturday’s dedication. Catloth said one joke was that the building was a “mansion,” not just a boathouse.

“Just to have it now all come together, there’s a lot of people here that today is one of the best days of their lives,” Catloth said.