Lawrence builder pleads guilty in bank fraud case, will testify against others 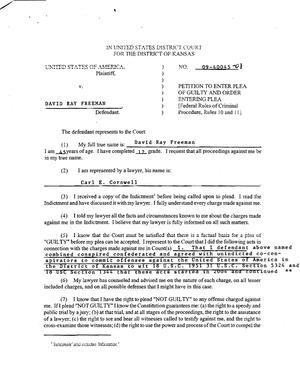 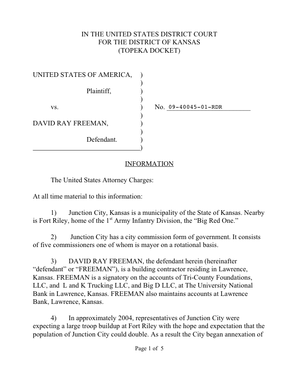 As part of a plea agreement, Freeman, 45, agreed to provide the government with information and to testify against others who might have been involved in an influence-peddling scheme that is said to reach into Junction City government.

“I gave money to a city commissioner in Junction City to influence him on certain projects,” Freeman told U.S. District Judge Richard Rogers, during a hearing in U.S. District Court in Topeka.

Rogers accepted Freeman’s plea, and set sentencing for Sept. 29. But attorneys on both sides of the case acknowledged that Freeman’s sentencing likely would be put off, at least until other indictments and potential trials had been given a chance to run their course.

At least one other person clearly rests in the government’s prosecutorial sights: an as-yet unnamed Junction City commissioner Freeman admitted befriending as early as 2004, a man referred to in case documents as “firefighter.”

Freeman admitted making or directing payments totaling $19,000 to the commissioner in 2006 and 2007. One of the transactions, Freeman acknowledged, involved Freeman having one of his own assistants draw and cash a check for $9,000, then deliver the money to the commissioner at a rest stop between Junction City and Topeka.

Less than a year earlier, Big D Development and Big D Construction — a combined company owned by Freeman and three other partners from Lawrence — had secured development contracts for two housing projects in Junction City. Together, the agreements were worth a combined total of $12 million to Big D.

Richard Hathaway, an assistant U.S. attorney prosecuting the case, declined to discuss the potential for filing additional indictments related to Freeman’s push to develop housing in Junction City as the military planned to boost the presence of troops at nearby Fort Riley. Assisting Hathaway during the hearing was Bonnie Lowe, a former Lawrence mayor and former bank official now working in the U.S. attorney’s office as a financial investigator.

After the hearing, Carl Cornwell, Freeman’s attorney, declined to reveal details about what his client might disclose to federal prosecutors. But he did concede that the case wasn’t anywhere near complete.

“David Freeman is a man, and he’s taking it like a man — unlike all the other fellas who hopefully are going to be indicted, and there will be a lot of them.”

As part of his plea deal, Freeman also agreed to “fully and completely assist” the government in its identification and recovery of any “forfeitable assets” acquired by Freeman or any others in connection with illegal activities.

Cornwell, in the interview after the hearing, doubted the government would find anything.

“There’s nothing,” Cornwell said. “He didn’t make any money out there. He lost money. There are no identifiable assets.”

Freeman was released on a signature bond.