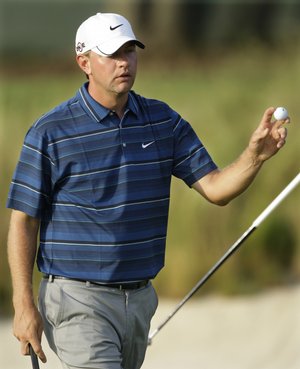 Lucas Glover waves his ball after his putt on the 16th green during the second round of the U.S. Open on Friday in Farmingdale, N.Y. Glover is the early leader through part of the second round. Story on page 8C.

Farmingdale, N.Y. — Throughout his young professional career, former Kansas University golfer Gary Woodland has put together quite a resume.

Friday, playing in the first U.S. Open of his career at historic Bethpage Black, Woodland added perhaps his most impressive entry to date. Its title might have read something like this: “Led Tiger Woods through 32 holes at the 2009 U.S. Open.”

One day after rains slammed the course and delayed play, the wet stuff stayed away Friday, allowing several players to scoot through nearly two rounds of the 109th U.S. Open. Woodland, who shot a 73 in the first round Friday morning, was in that group. He teed off for Round 2 around 4 p.m. and opened with a birdie on the par-4 first hole.

The KU product built on the momentum of a hot start, finishing Friday’s action 4-under for the round and 1-under for the tournament.

After the birdie on No. 1, Woodland recorded an eagle on the par-5 fourth and birdies on holes 11 and 13.

Because of the awkward nature of having to squeeze two rounds into the same day, Friday’s play was suspended due to darkness at 8:24 p.m. EST. At that time, players were given the option to finish any hole they had started or pick up where they left off today. The horn sounded after Woodland had teed off on the par-3 14th. Woodland chose to finish out the hole, which he parred to cap off a tremendous day.

The 80 or so golfers who were stopped because of darkness Friday will finish the second round at 7:30 EST this morning.

The other half of the field — which includes Woods — will begin second-round play once that wave is out on the course, meaning that, for at least one more night, Woodland can revel in the joy that comes with seeing his name ahead of the world’s No. 1 player on a major leaderboard.

Perhaps more importantly, Woodland appears to be in great shape to stick around for the weekend. The cut line at the U.S. Open is the top 60 players and ties, including all players who fall within 10 shots of the leader after two rounds of play. Woodland closed Friday tied for 12th place, four shots behind leader Lucas Glover.

Gary is having an awesome 2nd round and strong tournament overall. I got to see him roll in a couple of 25-footers yesterday for birdies (didn't see his eagle).

There was a scoring discrepancy that was pretty weird, however. Through 14 holes of round 2, the TV coverage had Gary at 1 under and tied for 11th place. But, the PGA Tour online leaderboard has him even par and tied for 16th. The discrepancy is in the 1st round score, 73 vs. 74, and specifically the 15th hole in round 1, one showing a bogey 5, and the other a double bogey 6. I hope it's really a 5 fro the 1st round 73. It's awesome overall in either case.

Gary may have caught a bit of a break with half the field not even teeing off yesterday, but maybe not. It depends on how the course plays on Saturday as compared to Friday. We'll see. I've been following Gary's results since he got on Tour, and this is shaping up to be his best outing by far. What a tremendous time for him to hit his stride. We're going to be watching him play on Saturday and Sunday in the U.S. Open! GO GARY!!!

Agree Maxhawk. I couldn't believe no picture of Gary.

Yep. I see that the PGA online leaderboard has been corrected to match what was being reported elsewhere. Round 3 about to start.