Travoy Martinez, a Dallas native, makes a cut near the sideline after pulling down a catch. Martinez worked out at the Super Jayhawk Camp on Saturday at the practice fields next to Memorial Stadium. 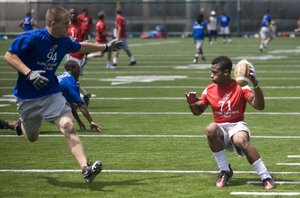 Years from now, when the names on Saturday’s Super Jayhawk Camp football prospect roster are looked back upon and their football accomplishments are researched, then it can be determined how much talent worked out on the two practice fields southeast of Memorial Stadium. This much was easy to determine already: Polite, respectful, eager-to-please athletes packed both fields.

Travoy Martinez, a defensive back/wide receiver from Dallas Woodrow Wilson High, had just finished an interview when it was time for him to ask the reporter a question.

He then called his father, Ray Martinez, over and proudly introduced him.

The best part of the camp, according to Travoy, was “learning all the different techniques from the coaches.”

Martinez worked out as a defensive back in the morning session and a receiver in the afternoon. Undersized at 5-foot-9, 159 pounds, Martinez made a couple of spectacular catches and showed excellent agility reacting to the ball. He said he has heard from Southern Methodist, Texas A&M and UTEP.

Perhaps the most impressive athlete during the afternoon session was Devin Patterson of North Mesquite (Texas) High. A 6-foot, 170-pound receiver, Patterson is the younger brother of KU cornerback Daymond Patterson.

“My brother told me if I come to Kansas, the coaches will treat you well, and I’m going to learn a whole lot,” the younger Patterson said. “He told me it’s a great environment.”

Patterson said workouts with his father, Daymond, a police officer, have enabled him to improve his speed and quickness in a big way recently.

“I’ve been working out with weights and running uphill,” Devin said. “I do a lot of resistance training. There’s a hill right by a little pond near our house. My father holds a bungee cord at the bottom of the hill and I run up the hill.”

Patterson said UTEP has offered him a scholarship and that Arizona State, Colorado, Iowa, Iowa State and Minnesota also have shown interest. He said he isn’t ready to make a decision and added, “I like Kansas a lot.”

Elite tight end prospect Chris Barnett, son of a Texas high school football coach Elzie Barnett, stood out among Class of 2011 prospects at the camp. Asked what other schools were on his list, Barnett said, “Miami and Oklahoma.”

One prospect at a time, Kansas gets listed with schools that for decades have been recruiting monsters. KU still doesn’t attract a large number of blue-chip prospects, but Barnett, when asked, explained why the trend is heading in the right direction.

“They don’t just want to beat their rivals anymore,” Barnett said. “They want to play in big bowl games every year and win championships and that’s what you want. I like the intensity of the coaches here.”

He said he also is considering Texas Tech, Rice, Houston, SMU and Utah.

So far, he said, his only offer has come from Stephen F. Austin.

Such camps technically are supposed to be only for teaching, but with the entire KU football staff teaching players who desire to play college football, they tend to notice which players are faster, dedicated learners and tend to recruit those players and stop recruiting others who don’t fare as well.

“It’s teaching at the most basic level,” KU recruiting coordinator Brandon Blaney said. “And it can be the beginning of a teacher-student relationship and sometimes that relationship can last four or five years.”

I agree, and it's also nice to read some more football stories. Let's hope they keep giving us more updates and takes on the camp and other football activities going on right now.

Sounds like the new complex is making an impact. I think that getting teams like GA Tech on the schedule which means more TV exposure in the south and other regions will start to influence the football talent to chose Kansas as well.

hopefully Daymond can get his little brother to come to KU. We could use size at WR for 2010-2011

I'm so ready for football!! We do need some more updates of summer workouts and stuff. Basketball is a long way off still.

Can we get some fodder, please? No new stories, commentaries, or even rumors since Sunday. Just make up something, I don't care. I need distractions from my job!

Good news! KU continues to improve. I also like how Mangino is improving our schedule in 2010. The only you get better is improving your competition. Bring it on Georgia Tech. In 2010 the great Todd Reesing will be gone. Greatest QB in KU History? Probably so, at least in the stats. And whether or not he has said he wants to be an NFL QB he deserves be..unless of course you are like Detroit, hate winning and just want to be the team everyone else sharpens their teeth on. Answer: You want to win?? Draft Todd Reesing! End of Story! And his impact on KU on our football program cannot be downplayed. However Mangino has done a great job recruiting. Take a look at Jordan Webb's Stats and you have to be amazed. Kale Pick from Dodge City is a great gunslinger too. The battle to follow(not replace, cannot be replaced) Todd Reesing should be great. Who knows how good Mr. Pick or Mr. Webb may be. KU Football is coming, the Jayhawks are coming! Ready to war. It should be great fun.

I wish this website would make a poll on who people want or think is going to win the QB battle in 2010. I would love to know from a lot of people who they think is really going to come out on top. Like Riggins said, Webb has amazing stats, but Pick is not too bad and has been in the system for a little longer. If the website would put up a poll that would be nice otherwise I would love to hear from other people their opinions on the future battle.

I am pulling for Webb, he kinda reminds me a bit of Reesing. An ability to run but does not rely on it. He trys to extend the play with his legs not make one with them and I like that plus a great ability to throw on the run with great touch.

I'd just be happy with more than 1 story per week on KU football. I mean, come on!

Oh, and the "analysis" about how "History" favors the bugeaters to the North to win the Big 12 North, instead of KU doesn't count. I say to heII with history! KU football is NOW! Get used to it!