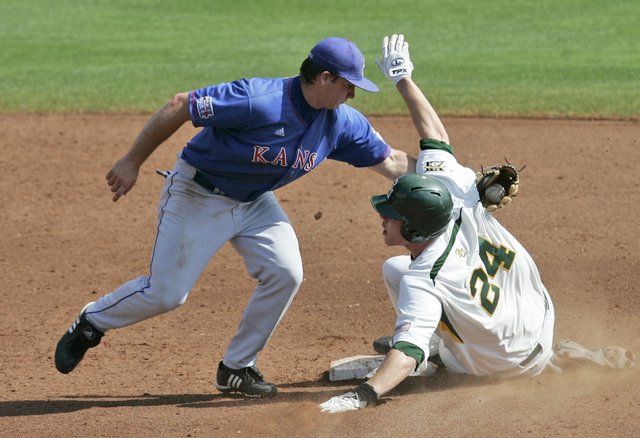 On Wednesday, the second day of the 2009 Major League Baseball amateur draft, Kansas University shortstop David Narodowski learned of his professional fate much the way baseball fans across the country did — by calling up MLB.com’s live draft tracker and watching the drama play out one pick at a time.

“I was watching it all afternoon,” said Narodowski, a native of Vancouver, British Columbia. “I was watching by myself for a while, but some of the guys came over and they sat through it with me.”

Shortly after, the Arizona Diamondbacks drafted the senior-to-be in the 15th round (pick No. 456 overall), making him the first Kansas player taken. He was later joined by fellow senior-to-be Shaeffer Hall, a left-handed pitcher selected in the 25th round by the New York Yankees (765th pick).

In his first season at KU after spending two years at Vernon (Texas) College, Narodowski batted .354 with eight home runs and 43 RBIs in 60 games en route to earning Big 12 Newcomer of the Year honors.

It was a strong postseason run, though, that likely helped boost his draft stock considerably. In the Jayhawks’ seven games during the Big 12 tournament and NCAA regional tournament, Narodowski hit five home runs from the leadoff spot and was a major source of the team’s offense.

After throwing a no-hitter in his first start of the ’09 season, meanwhile, Hall concluded the year with a record of 5-6 and a 4.18 ERA, finishing first in the conference in walks per inning (0.97) and pitching two quality outings in the postseason — one of which was a complete-game shutout in a 16-0 victory over Dartmouth.

On Wednesday, both players said they’d yet to make up their minds about signing professional contracts, and because each has a year of college eligibility remaining, both can elect to return to school for a final season.

Narodowski said he planned to talk at length with his parents before making up his mind, although he added his goal always has been to play professional baseball and that the draft’s developments have landed him in a prime situation to do so.

“I’ve been talking to the scout,” he said. “It’s close. It’s looking good for how it worked out with the draft, but I’m still not 100 percent.”

“It’s going to be a tough decision,” he said. “But it’s a win-win situation: being able to go to a great organization like the Yankees or going back to KU for my senior season. It can’t get better than that.”

One other selection could have an impact on the Jayhawks’ 2010 season, as well. Kansas signee Shawn Blackwell, a pitcher out of Clear Creek High in Texas and one of four incoming players, was taken in the 24th round (pick No. 724) by the Texas Rangers.