Former Kansas player Russell Robinson jumps between Christian Moody, left, and Chris Zerbe on his way to the basket during the Rock Chalk Roundball Classic at Free State High. Robinson played with the Reno Bighorns of the NBA Developmental League last season. 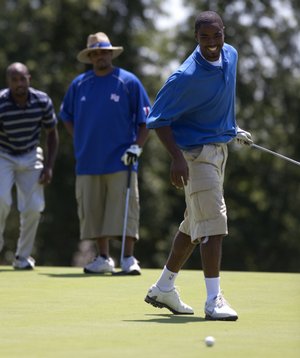 • Russell Robinson, who played well for the Orlando Magic NBA summer league team in July, has accepted an invitation to attend the preseason camp of the Cleveland Cavaliers.

“The situations are very similar,” Robinson said of Cleveland and Orlando. “Both teams need a third point guard. Being able to play with Shaq (O'Neal), LeBron (James) and Darnell (Jackson), of course, you can’t go wrong with that.”

Robinson said there's still a chance he could end up in Orlando's veterans camp, but for right now “I decided with Cleveland.” He said the Cavaliers would probably bring him in for workouts in August or September with vet’s camp in October.

• Robinson now has played golf twice in his life.

“The first time was in Steve Vinson’s backyard somewhere around here,” Robinson said of the former KU walk-on guard.

Will Robinson ever take up golf? “Probably when I get older. It’s an old man’s sport I heard,” he said with a laugh.

• Robinson was in New York earlier this week, “with my family, working out there, back in my old grounds. I came out for this. Anytime you hear the guys will be back, I don’t want to miss out. I like it here. It’s my second home. Anytime I can get back, that’s good.”

• Mario Chalmers, who held a camp for 130 youths in Salina earlier this week, will hold a camp Aug. 13-17 in his hometown of Anchorage.

“The camp in Salina went well,” said Chalmers, who is committed to holding a benefit golf tournament in Lawrence every year.

“This means a lot to me, shows a lot of people still care. Diehard KU fans always want to have you back and support you.”

He was happy to see Robinson, former KU guard Aaron Miles and all of the coaches from the ’08 title team at the tourney, but missed Darrell Arthur and Darnell Jackson, who had to back out at the last minute.

“Like anything else, I got some phone calls yesterday,” said Mario’s dad, former KU director of basketball operations Ronnie Chalmers. “Darrell called and said, ‘My team said I had to go to Las Vegas for the weekend (big man camp). Darnell called and said he was ready to get on the plane to come to Kansas and Danny Ferry (Cavaliers GM) called and said, ‘You’ve got to go to Vegas.’ He (Jackson) was upset. Brandon (Rush) had to go to China to play in Basketball Without Borders and Sasha (Kaun) is with the Russian international team. The guys are excited about coming back. They are rookies now with a lot of responsibilities. If not this year, they’ll all be back next year.”

• KU athletic director Lew Perkins was happy to be a part of the tournament.

“Mario has a very special place in everybody’s heart,” Perkins said. “I love the fact Mario and his family chose to do something like this (have tourney to benefit Chalmers’ foundation). I think it’s awesome to have that happen.

“Anytime we can play for any foundation, I think it’s important. Plus I said to somebody, ‘Whoever planned the weather for today ... I’ve got seven days in the fall I need to be the same,’’’ he cracked, wanting great weather for KU’s home football games.

Maybe having a good outcome with Darnell influenced the Cavaliers to take a look at RR. I hope he makes a roster somewhere!!!!!

t would be sweet if RussRob could become a Jacque Vaughn-like player for the Cavs with Darnell improving with more experience and perhaps them recalling Kaun from Russia once big Z starts to wear down in the next few years.

Z is definitely more of an offensive center than Sasha, but do the Cav's still have Ben Wallace on their roster? Sasha could almost replace him right now.

I thought OKC had the rights to Kaun?

Now if the Cavs could only trade for Chalmers, Rush, and Arthur, I'd have a new favorite team!

Who's the last Jayhawk to win a title at KU and in the NBA? Anyone on the '88 team?

Good question, jhawks1510. Who would Manning have won an NBA title with, leikness? My guess is it had to be someone from the '52 team if there was anyone at all. Ah Fiddlesticks! Where's Mayer when we need him?? ;-)

So, in case we didn't know already, Bill Self is a ridiculous evaluator of talent.

Good Luck, Russell. I hope you make it all the way. I can't understand why you haven't.

Well, it only took a little bit of research to prove myself partially wrong. While I still believe Clyde was the first to win all three, Bill Russell and K.C. Jones completed the trifecta a few years later, long before Jordan.

I do care about former players, even if I don't so much care about their golf tournaments.

I'm all for good causes, don't get me wrong. Articles about a celeb golf tourney just aren't really sports-section stories to me, though. Unless Chalmers got D-Wade to come to the competition and dunk on the golfers. That'd be kinda cool.

Though, Nike might confiscate the tapes for some reason...

Hope it turns out to be a huge success, and I hope to get real basketball stories to read one of these days.

Hope Russ Rob makes a team, too. He deserves it.

Very cool! Way to go RussRob!! Damm, I wonder if I can get into see the big man camp practice's here? Its probly at the Thomas and Mack at UNLV. I love Vegas!

another trifecta winner: Magic Johnson. also, gets points for first person cured from AIDS. he may in fact be the only one on that list.

Clyde, Bill Russell and K.C. Jones won the true trifecta, when it was college kids competing in the olympics. Not professional all-star teams. Just my opinion.

Also, Magic didn't have AIDS, he tested HIV positive. There is a huge difference.