Teams from the Big 12 Conference gathered in Dallas for preseason media day. Kansas University is scheduled to participate in the media event Tuesday. 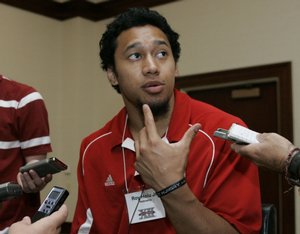 “We call him Ducky,” NU junior running back Roy Helu Jr. said. “‘The Land Before Time,’ it’s a cartoon movie, and he looks like Ducky, that little dinosaur they have on there.”

When Suh, a 6-foot-4, 300-pound preseason All-Big 12 senior, sat down in a chair on a slightly elevated platform Monday at Big 12 Football Media Days, he immediately drew a flock of reporters to his station. Questions were fired the way of Suh, who looked every bit the part of the defensive tackle who led Nebraska in tackles (76) and sacks (7.5) last season: overpowering; intimidating (for opposing quarterbacks, anyway); ready to hit someone.

“I knew exactly where it came from,” Suh said of his nickname. “It was all fun and games. We have this thing in the locker room — and it’s been there pretty much since last fall camp — of what people look like. It was hilarious to see that joke.”

Suh spoke with a sense of energy that brought out his happy-go-lucky personality. He seemed pleased to be at the Westin representing the Cornhuskers, the media’s preseason No. 1 in the North. He often flashed a smile that suggested maybe Ducky fit him just fine.

The defense that Suh currently leads was atrocious not too long ago under coach Bill Callahan.

Just two seasons ago, Nebraska ranked 112th of 119 Bowl Subdivision teams in total defense. The Huskers were embarrassing on defense, as evidenced by the epic 76-39 pasting Kansas University gave NU in Lawrence.

A year later, Bo Pelini, the former defensive coordinator of an LSU squad that won the 2007 BCS Championship, was brought in to save Lincoln, Neb., and its beloved football program. Pelini brought the Huskers back to respectability on defense. Last year, Nebraska moved up to 55th in the country in total defense.

“I thought we made some strides on defense, but we’re not in the same galaxy of where I want to be defensively,” Pelini said. “I believe we’re heading in the right direction. We’re going to play good defense in Nebraska. I’m very confident of that. We’re not going to be satisfied until we are a dominant defense.”

No one has benefitted from Pelini’s returning the Huskers to prominence more than Suh. In just one season under Pelini’s regime, Suh burst on the national scene and provided a little bit of everything in 2008. Sure, he was the first Nebraska defensive lineman to lead the team in tackles since 1973. But he also intercepted two passes and returned both for touchdowns. His versatility also led him to lining up as a fullback on offense and catching a touchdown off a play-action pass against Kansas.

“It’s exciting to have the ball in your hands,” Suh said of the interceptions. “I mean, that is one feeling that you don’t always get to have. I enjoyed it, but it’s not something I always look forward to. I look forward to putting my helmet inside the quarterback’s neck. That’s the best feeling.”

Suh spoke with a sense of pride about his school, which has five national championships to its name. After all, Nebraska gave him a chance to prove he could also play at the next level. Suh is expected to be a high-first-round NFL Draft pick. In fact, Todd McShay ranks Suh the No. 2 overall pick in his 2010 mock draft on ESPN.com. He probably would have been a first-round pick in the most recently completed draft.

“My teammates, they give me crap all the time about, ‘Are you going to be the No. 1 Draft pick?’ And I’m like, ‘Yeah, it’s there, but I have to work for it,’” Suh said. “When April comes, if it happens, then that’s that, but until that happens, it’s all speculation.”

“He just felt like he had unfinished business,” Pelini said. “He felt that he wanted to be instrumental in where the program’s headed, and he wants to finish off his career at Nebraska the right way. We’re very fortunate to have him back.”

Nebraska has every intent of winning its fifth North crown in the Big 12 era this season and its first since 2006.

The Huskers won six of their last seven games last year. They return two quality running backs in Helu and junior Quentin Castille. They should have room to operate. NU returns 61 starts on its offensive line, tied for the highest mark in the North.

“I don’t see any added pressure because, for me, that’s the expectation for Nebraska every year, regardless,” Suh said. “It’s something I feel this team has to live up to every year. And that’s just the way it is. That’s the reason I came to Nebraska.”

Nebraska and Kansas are the two favorites to win the North this season. The two squads have completely varying strengths. Kansas returns experienced skill players and lacks experience on the offensive line. Nebraska, by contrast, will rely on the experience of its offensive and defensive lines.

“Geez. I didnt even know it was that staggering of a stat,” Hickman said. “It’s good to have guys that play a lot of games. I know when I was younger, I talked to guys who played a lot of games, and they’d say, ‘Hey, this is what to expect,’ so guys who haven’t played as much on the line can feel more comfortable because they know they have seasoned vets next to them. And knowing to the left side of me, I have Mike (Smith) and Keith (Williams), who all combined, we’ve probably started 50 games or so, it helps the younger guys and allows you to go into the game a little more confident."

Better know a foe..... i hope our offensive line gels quickly..... they do, and our receivers can torch their secondary.

"Nebraska has every intent of winning its fifth North crown in the Big 12 era this season and its first since 2006."

Huh? Nebraska was Big XII North co-champions with MU last season. That was one of the extra-special benefits we got from beating MU at Arrowhead.

So has Iowa State won the North Crown yet ?

"I look forward to putting my helmet inside the quarterback’s neck. That’s the best feeling.”

Sounds like someone with the desire to get flagged for a personal foul/expulsion. It's hard to believe that kind of comment won't get some him some added attention from officiating crews.

I think Iowa State shared the North Title with Colorado back in 2004.