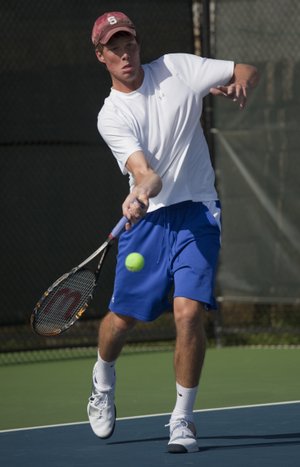 Michael Swank of Lawrence returns the ball in a tie-breaker match Friday in the KU ITA summer circuit tournament at First Serve.

The new outdoor courts at First Serve tennis facility will be put to good use this weekend as Kansas University plays host to the Intercollegiate Tennis Association summer circuit.

The tournament is designed to bring both junior and college players together to compete at a high level.

“We really like it because it gives our players who are studying here in the summer a chance to play and to see all the college players out there who we’ll probably play against,” said KU women’s tennis assistant coach German Dalmagro. “I think it’s a good chance for everybody to play in a tournament that’s considered a college level. It gives junior players a chance to compare where they are to the college players.”

“I really wanted the experience of playing against some tougher college players,” said Sarah Snodgrass, an upcoming senior at Shawnee Mission East. “I’m going to be going into college in a year, so I wanted to be able to say I’ve played against some of these good girls.”

“It’s a really good level of competition,” said Scott Elwell, head tennis pro at First Serve. “I’ve seen and I’ve played in this tournament before and this is probably one of the strongest tournaments. Some of the junior players that have moved up and are playing in this and some of the older college players, you’ve got a good mix of players.”

The high level of competition could have a lot to do with the quality of the new and improved facilities at First Serve. Last October, First Serve expanded its court space to include six outdoor courts.

“Before we had to use the courts at the Robinson Center on campus, which are not very good,” Dalmagro said. “Now, it has changed a lot. The school, in conjunction with First Serve and the Elwells, they’ve done a great job. Considering a year ago, there were only three indoor courts here (at First Serve). And now we have five indoor courts and six outdoor courts.”

With the new court space, KU can now also host its own larger tournaments in the fall instead of having to always travel to compete, Dalmagro said. And hosting tournaments is key as First Serve and KU look to rebuild tennis in Lawrence.

“It’s very important not only for prospective students in the future, but to the current student athletes at all universities to put the word out there about Lawrence and KU and this great facility,” Dalmagro said. “We hear good things from the players. They want to come back next year, so that’s a good thing. I think it put us on the map. Each year is getting bigger.”

“I think it’s great exposure for Lawrence and the tennis community in Lawrence,” Elwell added. “You see people traveling from all over the country to play in this tournament.

“Lawrence has a few representatives in the tournament, and to get them to be able to play in front of their home crowd and get all the people from around the area to come out to see the new facility and know that we’re here, that’s just great exposure for us as well. Since we’re a newer facility, a lot of people don’t know that we’re here. A lot of people haven’t seen how nice the outdoor courts are. For them to get out and see people playing on them, it’ll hopefully encourage them to come back.”

Tournament play will continue at First Serve through Sunday.

Too bad we don't even have a MEN'S tennis team. Equality?

Having to use off-campus courts further proves that KU Tennis will always be third-class since they cut men's tennis. The fact that we can build facilities out the wazzu for the basketball and football but don't support the Olympic sports fully is sad. I have an idea, why don't we have the student body build a tennis facility like they did for the rowing team

Basketball and football are very profitable sports, tennis is not. I wish KU could have world-class facilities for every sport, but it's not really feasible. You have to put the most support into what you'll get the most ROI on.

what does my Raspberry Orange Intake have to do anything with tennis and sports!?

Too much TV watching for us, rockchalkblock; for you to make the joke and for me to understand it. I wish we could say we saw it while watching a KU game!

Facilities for tennis? I think we should worry more about getting our football stadium to the same level as OU, Texas, Nebraska, ATM or even OK St. With that extra 30-40 K seats, we could do a lot of things with the money we'd make from them.

We don't have a women's football team. If you want an equal number of scholarships between the sexes, you need a whole lot of womens' sports to serve as a counterweight to a 100+ person football program.