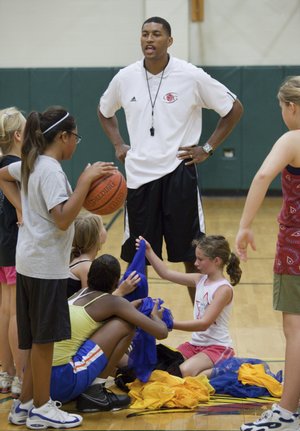 Whistles and buzzers sound off around the Free State High School gym as girls run through shooting and passing drills. Coaches offer tips on agility, shooting techniques and ball handling.

The camp, which held its girls’ session for grades 3rd through 12 Tuesday through Thursday, gives youths the chance not only to interact personally with Simien, an All-American at Kansas University and former NBA player with the Miami Heat with whom he earned a championship ring in 2006, but also to connect with the spiritual side of basketball.

“There are a lot of different venues where kids can go and do a basketball camp,” said Jesse Brinson, a youth pastor with Midwest Student Ministries and one of the coaches for the camp. “But I think what makes this camp different is the spiritual aspect. The other camps don’t send a message of God and the Kingdom of God. And that’s Wayne’s main purpose. To bring a group of people together and to tell them ‘You know, you can play basketball and you can work hard, but spiritually also, you need to know why basketball was created, why do we play basketball, and what kind of attitude you should have going into the sport.’”

“You can use a sport like basketball to teach life lessons,” noted April McDivitt Foster, a former WNBA player and a former point guard for the University of Tennessee under Pat Summit, who is helping coach the camp. “I try to share with these girls how to practically glorify God through your sport and your intensity and the attitude with which you play. It’s things I’ve learned that hopefully I can share with them.”

For Simien, who officially ended his professional career this last spring to pursue a career in ministry, spirituality was a major factor in the planning of the camp.

“Once Danny Manning gave me the opportunity to host a camp here in Lawrence, I started to have all kinds of dreams and ideas about what this could really be,” Simien said. “We really see it as an opportunity to teach these kids about more than just basketball. Obviously, April and I have a certain level of expertise, being college players and professionals. We have the ability to teach them a lot about basketball and how to be great players on the court, but we also see the opportunity to really impart to them Biblical principles that will help them to be effective in every area of their life.”

“If there is one thing I want these kids to walk away with, it’s that greatness doesn’t come from their athletic achievement or their individual accomplishments,” he said. “So many people are going after that, and either they’re let down because they don’t achieve what they think they should or they achieve it and later on in life, it doesn’t really do them that much good. They need to understand that their greatness comes from being created by God, being sons and daughters of God. The ultimate example of greatness is Jesus Christ. It’s not LeBron James, it’s not myself, it’s not April.”

For such a big-time basketball player and local Lawrence sports icon, Simien seems to have taken his own lesson to heart. Out on the courts during his camp, he isn’t a former player, but a teacher who’s not afraid to joke around a little.

“Every time we were shooting in our three-on-three games, he would always yell ‘Rain dance!’ and be jumping up and down,” said Haley Pfau, a sophomore-to-be at Oskaloosa High School. “And then he’ll be all happy when you make the shot.”

“Even though he was in the pros, he still acts the same,” added Starjha Jones, an upcoming senior at Center High School in Kansas City, Mo. “He doesn’t treat us any different. He’s no Mr. Showtime, high-maintenance, I’m-better-than-you. He acts like a normal person. The other day, we were eating at the table and he was talking about something and the next thing you know, he had these crumbs all over his shirt. So we started laughing and he was like ‘What’s so funny?.’ He didn’t even eat a sandwich, so I don’t know how he got mayonnaise and stuff all over his shirt.”

Jokes and mayonnaise aside, Simien says he has finally found fulfillment in making a spiritual impact on the youths in his camp.

“I had an opportunity to get back in the NBA this year and to continue to play overseas, but it really came down to that I just had more of a desire to minister and to really see people’s lives impacted by Jesus Christ than just play basketball,” he said. “I was able to do that to a certain extent while I was playing professionally, but I really had more of a desire to do that full time. It’s not like I walked away from tons of millions of dollars, but I came away from the opportunity to continue to make a nice living. I have more of a heart to do stuff like this than continue to play.”

The boys’ session of Simien’s camp will take place next Tuesday, Wednesday and Thursday in the Free State gym.

Understanding a guy like Simien is difficult for most. It goes to the heart of man and that which drives him. Simien found out early enough that God had a higher calling for him than running around all over the world trying to fulfill a dream of playing basketball at the highest level. He discovered there is actually something in this world greater than playing basketball and that is finding one's purpose in life. Wayne is fulfilling his purpose. Many will question his decision or maybe even see him as giving up the dream. Quite the contrary - Wayne discovered early enough in life that he was called to serve rather than to be served. Wayne is a man after the heart of his Leader.

Beautifully stated, fansincewilt! It's an amazing gift to discover one's true purpose in life, and obviously, Wayne has found his. Many people, especially those who sense a lack of purpose or direction in their lives, would greatly benefit by examining carefully Wayne's personal spiritual journey. I really loved the following statement:

How cool is that?

No mention of his cousin dying of cancer earlier this week? I guess there's no real reason to put that in. Just a sad story though. I'll bet Wayne has a lot on his mind right now, but it sounds like he's doing a good job of still being jovial for the campers.

Great ministry Wayne, so wonderful for you to serve Him in this way, I hope that he blesses you to bear even more fruit for Him as time goes on, this sounds like a great national ministry idea to me! Parents, kids, what a great way to combine your love for basketball with great spiritual advice as well.