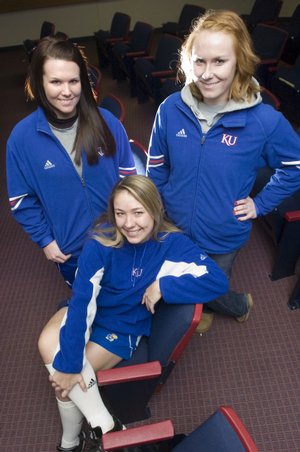 Seniors Elle Pottorf (from left), Dougie McCaulley and Valerie George were some of the KU softball team that met with the media Monday, Jan. 26.

Like any coach, Tracy Bunge will let the chips fall where they may. Yet it sounds like one of those chips already has landed. On her shoulder.

Bunge will begin her 13th season as Kansas University’s softball coach this weekend, and she made it clear Monday she didn’t necessarily agree with Big 12 Conference coaches who predicted the Jayhawks will finish eighth in the league this spring.

“We still obviously don’t have the respect of some coaches in this league,” Bunge said.

Oklahoma was the clear-cut preseason favorite in the preseason poll, and Bunge wasn’t about to argue with that assessment.

“On my ballot, other than Oklahoma, I thought it was a real crapshoot,” Bunge said, “because so many teams have lost so many key players. I think the race is wide open.”

Bunge lost only one contributor — outfielder Betsy Wilson — off a team that won 37 games last season and finished seventh in Big 12 standings. In other words, the Jayhawks will be one of the most experienced teams in the league.

But experience is no substitute for talent, and the perception about Kansas around the Big 12 is that the Jayhawks boast solid hitters, good fielding and adequate speed, but only average pitching.

“Through the eight and nine spots in our lineup, we have very good hitters,” Bunge said, “but the biggest question mark is how well our pitching staff will do.”

Bunge doesn’t have any pitchers who will blow hitters away, but senior Val George and junior Sarah Vertelka know how to pitch and boast varied repertoires. George finished with an 18-10 record and a 1.96 ERA last season, tailing off late when Vertelka was injured and she had to pitch too many innings.

“I got a little bit tired, and my stats went down,” said George, a right-hander from Tucson, Ariz., who pitched more innings last year (179) than she did in her first two years combined (148). “I’m trying for more consistency this year.”

Vertelka (10-5, 2.54 ERA) wound up throwing fewer innings (94) than Allie Clark (99), a freshman who posted a 9-4 record, but an unimpressive 3.10 ERA. Joining the mix in the circle is freshman Sarah Blair, who was named the most outstanding player in the Houston area last spring and who Bunge describes as “pitcher-hitter.”

In addition to the returning pitchers, Bunge also will be penciling in familiar names when she fills out pregame lineups.

Senior Dougie McCaulley, who batted .375 and earned second-team All-Big 12 honors, owns center field, and fifth-year senior Elle Pottorf will be back behind the plate after missing more than half of last season because of a knee injury, although she’ll share backstop duties with soph Brittany Hile and DH when not catching.

Somewhat up in the air, however, are the two corner outfield spots. Junior Ally Stanton and soph Liz Kocon are the probables. Kocon was the primary right fielder last year, but may switch to left, with Stanton, last season’s fourth outfielder, going to right.

Notes: Buddy Foster, a former head coach at Bradley, has joined Bunge’s staff and will work primarily with the infielders. … Alicia Irwin, a transfer from Coastal Carolina, is bidding for an outfield job. Irwin is a native of Salina. … KU will face nationally ranked Stanford, Northwestern and Arizona during their season-opening tourney beginning Feb. 6 in Phoenix.

The tourney isn't this weekend Woodling. It's next weekend.Also, how is pitching mentioned as the biggest weakness, when fielding was the primary achilles heel?

I agree that pitching is not strond nor was fielding. At the top level of Division I you have to have over-powering itching and premium fielding. You score runs off of the other teams mistakes.The returning KU team can only get better in the field, but they need a stopper on the mound. Does not look like KU added anything on the mound for this upcoming season.Coach Bunge has done a good job with very little talent. I don't see them higher than upper second division Big XII, unless pitching and fielding go up at least a level from last year.i