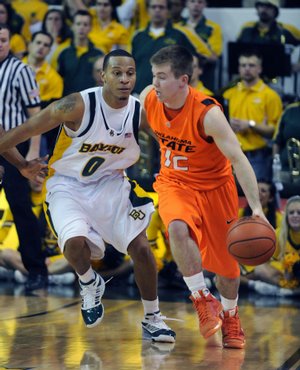 Every time I look at Willie Warren I get upset. He should have gone to Kansas! Anyway, checked out the video of Willie's dunk. Were those salted or honey roasted?

does it look like in the video of the dunk that Warren uses his left hand to push off on the defender to get some added height?

clearly that left hand down on the shoulder is what drew the whistle; offensive foul or not, he lifted off for that dunk, wow

That was a sweet dunk. I didn't think he showboated enough to get a T, looked pretty harmless to me.

I think the whistle was a Tech for taunting the guy

Any one of our guys would do the same is they dunked over a guy like that. Weak call for the T, he was just as much surprised and pumped as he was cocky about it.

Interesting mbmerriman, Warren, Taylor and Acy are definitely the three best freshmen in the league so far. I will have to study the Big 12 stats and see if I agree with you on the rest.Regarding All league, my picks at this point are:CollinsGriffin-OUBrackens-ISUJerrells--BaylorPoint guard at Texas whose name I just forgot.

i agree with the all league picks but i want all-"lug" picks, ya know, like Sasha Kaun, Jason Keep, Monte Large Harge, buys who play simply because theyre big and ugly

All Lug Team--Luis Colon would definitely be the charter member of this group but I would also add a guy named Lomers from Baylor and a couple of those foriegn guys from Texas Tech.

OK mbmerriman, I've gone through all the freshman stats(over my lunch hour of course) and my All freshman team--top five.1. Warren2. Taylor3. Acy4. Denmon5. Either Marcus Morris, Kim English or McCray-- I'll go with Morris and hope he proves me right by the end of the season.

jayhawkphil, solid list. By the end of the season, I feel as if Acy could be the second-best freshman in the conference. He's had a stellar start to the conference season. When I made my list, it was before last night's KSU-Baylor game, and focused more on proven production, and not as much on a prospect's ceiling. But wow - Acy looks like the real deal. And I'm impressed with how you utilized your lunch break.