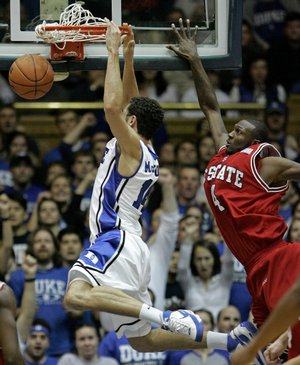 Henderson scored 21 points, and the Blue Devils shot 76 percent in the second half of their 73-56 victory over North Carolina State on Tuesday night.

But it wasn’t until Henderson took the game over by hitting jumpers and driving the lane for authoritative dunks that his teammates started to find the seams in the Wolfpack’s defense. As a result, Duke’s athletic swingman finish with his fourth straight game with at least 19 points.

“(Henderson’s) play gave the team a big lift — when someone plays with that much assertiveness and confidence, it kinds of feeds down to the whole team,” forward Kyle Singler said. “Guys kind of get shots from that.”

With Redick — the Atlantic Coast Conference’s career scoring leader — watching from behind the Duke bench, Singler scored 14 of his 17 points in the second half and Smith finished with 13 to help the Blue Devils, who closed the game on a 27-5 run.

Their 20-for-26 shooting matched the best performance in a second half in nearly three decades under coach Mike Krzyzewski.

“When we’re sharp and running our stuff and executing it ... if we’re doing it sharp, we’re going to make shots,” Henderson said. “We’re going to get open shots and we have good enough players to knock them down.”

Brandon Costner and Ben McCauley both scored 15 points for the Wolfpack (10-6, 1-3), who led much of the game but hit just one field goal over the final 7:45.

“We were in it, and we couldn’t close it,” McCauley said. “We had them where we wanted them, and guys were playing tremendous basketball. ... Unfortunately, guys that were in the end couldn’t come through.”

“You can see how it lifts their spirits up,” Costner said. “It’s up to us as a visiting team to pick up our level of intensity and match it, and we didn’t.”

For a while, they had the streak in serious jeopardy — until Henderson, Smith and the rest of the Blue Devils heated up.

Champaign, Ill. — Mike Tisdale scored 11 of his 15 points in the second half for Illinois, which won its first game this season with a national ranking.

Illinois took the lead for good in the opening five minutes and then sealed the win with a 22-9 run in the second half.

Demetri McCamey had 13 points for Illinois, and Chester Frazier had 10.

B.J. Mullens had 14 points for the Buckeyes, who had won three straight and committed a season-high 19 turnovers.