Kansas center Cole Aldrich fights for an offensive rebound amidst the Colorado defense during the first half Saturday, Jan. 17, 2009 at the Coors Events Center in Boulder, Colorado. 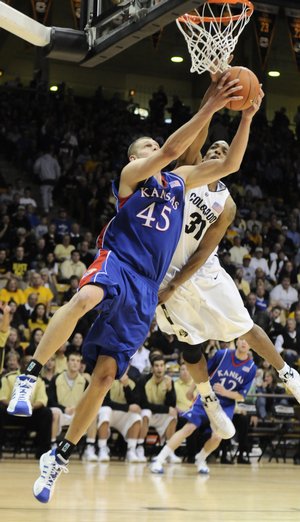 “It’s no excuse to not box off and try your hardest against him,” said Eckloff, Colorado’s reserve forward, “but his level of talent is just yards beyond where everyone else is that we’ve played so far.”

He also was perfect from the floor, making all six of his field-goal attempts.

“We could go deep in the season, and I don’t think we’ll find a big man who’s as physical and overall skilled as him,” Eckloff said. “In a way, it was a great learning experience for me just to learn how to play against someone of his caliber.”

Though the Buffaloes couldn’t match up inside with Aldrich, they felt the game was lost in other areas.

“Bad turnovers and not boxing out — we lost the game instead of them winning it, which is a big disappointment,” said guard Nate Tomlinson, who had seven turnovers.

The Buffaloes committed nine turnovers in each half. While coaching at Air Force, Bzdelik said his team’s goal was 10 turnovers or fewer.

“I use the analogy, the other day, I saw three little boys playing, and they were arguing, ‘It’s my truck. It’s my truck.’ And they’re fighting,” Bzdelik said. “It’s like, ‘It’s our ball. Hold onto it. Let’s be a little selfish and nasty. The opposition … you can’t have it just yet until we get a good shot off.’”

Bzdelik was so frustrated with his team’s defensive rebounding earlier this week that he called up his former boss, NBA Hall of Famer Wes Unseld, to ask for his advice.

Bzdelik was Unseld’s assistant coach with the Washington Bullets in 1993-94.

“If we can stay with these guys, there aren’t too many other teams that we couldn’t stay with,” Eckloff said. “It’s just mistakes that we made that are very correctable. We just have to buckle down and just fix ourselves.

“Give them their dues, but I don’t think they greatly outplayed us. It was mistakes that we made ourselves.”

"we lost the game instead of them winning it, which is a big disappointment,” said guard Nate Tomlinson, who had seven turnovers.Give me a break. Doesnt Tomlinson realize his team is awful and is destined for the Big 12 cellar? KU isnt even that good and they won going away in their building.

nutflush21Call it a case a coach-speak for the home crowd. As far as KU "not being that good", I would agree with a comparision to last years team. Howver, compared to this year's Big Twelve, only two teams rank as superior {OU and TEXAS}, several teams rank as equals [Baylor, A&M, Okie ST] while the remaining six are inferior [5 of which we play twice]. 12-4 league record is not totally outrageous.Nobody has the G/C Combo to match Collins/ Aldrich. The problem is that KU is still looking for that #3 guy and the challenging teams have one and even a #4 with a decent G/C combo to boot. That's why it's critical to find a consistent #3 scorer, and I mean the same guy game in and game out [Tyshawn, step up please!!!]

I should qualify my comment... When I say we aren that good, I mean we are by no means an elite team and a final four contender which is where I expect Kansas to be year in and year out. Also to know that we are one freaking player away (ie Willie Warren) from being a top 15 team kills me.

Colorado bemoans its mistakes? What about KU. Most of that game was a comedy of errors. Even Collins and Aldrich didn't play up to snuff. I don't know much about Reed, but he did impress me today.