Kansas' Sade Morris (20) reacts after Danielle McCray (4) can't handle a pass from Morris and the ball bounces out of bounds during the first half of the game Saturday, Jan. 17, 2009, at Allen Fieldhouse. 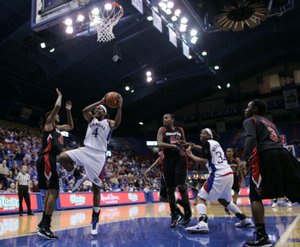 If there’s one thing Bonnie Henrickson knows about her Kansas University women’s basketball team, it’s that she never knows.

Sometimes the Jayhawks show up — like in Wednesday’s victory over Missouri.

Sometimes they don’t — like in Saturday night’s 57-49 swoon to Texas Tech in Allen Fieldhouse. And in last Saturday’s stinker at Kansas State.

“It’s nauseating,” Henrickson said of her team’s Jekyll-Hyde performances. “I don’t know what else to say.”

Don’t be fooled by the Texas Tech final score. This one was never that close. The Red Raiders led by 19 with three minutes left, then started missing free throws and playing matador defense.

How bad were the Jayhawks?

Prior to that late surge, the Jayhawks were shooting in the 20 percent range. At halftime, KU trailed, 32-17, after making just five of 25 shots.

“The energy wasn’t there,” Danielle McCray said. “The same energy we had against Missouri we didn’t have tonight. There just was nothing there.”

McCray was the game’s leading scorer with 22 points, but a dozen of those came in the last three minutes. Prior to that, she couldn’t hit the campus from the top of the Campanile.

“Danielle right now has to get herself right,” Henrickson said. “She’s in the worst funk of her career.”

McCray took two dozen shots Saturday night and had as many turnovers — seven — as field goals.

“I couldn’t find any rhythm for nothing,” McCray said. “It was just horrible.”

McCray had plenty of company in the horrible-shooting category.

Nicollette Smith, the Big 12’s most accurate three-point shooter, bricked five of her six shots from beyond the arc after nailing four of five against Missouri. Among LaChelda Jacobs’ seven missed shots were two wide-open fast-break layups.

Adding injury to insult, the Jayhawks lost Sade Morris, their second-leading scorer (12.8 ppg.) about 12 minutes after tipoff when she took an inadvertent elbow to the head. Wobbly-legged, Morris had to be helped off the floor and did not return to the bench.

Henrickson declined to divulge the nature of the injury, saying after the game that she hadn’t heard from the doctor. However, it was apparent Morris had suffered some degree of concussion.

In theory, Kansas had the incentive against the Red Raiders because the Jayhawks hadn’t knocked off Tech since 1999. Also, KU had its second-largest crowd of the season (4,846), in large part because 3,000 free tickets were distributed to youngsters attending a Mid-America Youth Basketball tournament this weekend at various Lawrence venues.

But the Jayhawks chalked up so many rocks that the throng rarely had an opportunity to cheer, much less sing the Rock Chalk Chant.

The girls weren't at the least motivated in that game.I can understand a bad shooting day, but the girls didn't even TRY to go after loose balls, go for rebounds, make smart plays, etc.I am however, impressed with how they turned the game around in the last 3 minutes. Down 20 and brought it down to only an 8-point deficit in a little over a minute. They could of pulled off an enourmous upset (seriously... who would blow a 20 point lead in 3 minutes???). I just hope Sade Morris is alright.

a must win game....how do we shoot so poorly at home? TTech is an also ran team.....another 5-11 record in the league should doom Bonnie....and that's right where we're headed again.

Better decision making when it comes to feeding the post, moving the ball around the perimeter, and bring the ball up the court. Better decision making on when to drive the lane and attempt a shot, or drive and pass to a posted up wing for a three. When, after a missed shot, to continue try to put it up or kick it out to reset.And finally better transition up the court under pressure situations. Two players coming back to trap, just have the 5 hang back so the point can pass it to her for a quick pass up the court to try and catch the defense out of position.I think that this team is a really good team, and in my opinion, those are the things I think that they need to work on to get to where they need to be. Of course I'm not the coach or an expert, so I might be totally off base on this. But offering opinions as to what I think is wrong and needs to be worked on is better, and more constructive, then rolling through here saying the team is bad and crying for the coach's removal... of which would do more harm then good.

Looks like it is Big XII league time and the WBB team is settling into the old pattern of bottom third in BIG XII. They needed to beat TTech at home to have a shot at 8th place. Coach Bonnie just doesn't get it. Until she can coach talent she will not make it. She is missing talent and I have never seen her coaching talent yet at KU after almost 5 years!McCray should be their anchor when they are playing poorly, but tonight she was as bad as anyone on the court (this covers a lot of floor tonight)!

It would be nice to see Bonnie stop yelling plays and trust them to make some decisions, it's frustrating to see them always looking at her for every call. I hope for better things the rest of this season, but I would be happy to see Boogaard at least pretend to jump or have ball awareness.