Danielle McCray goes up against Missouri's Bekah Mills in the first half of Wednesday's game. 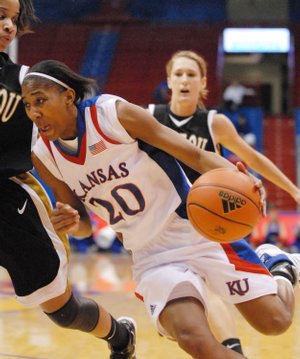 That bus droning out of Manhattan on Saturday night took only about 90 minutes to reach Lawrence.

Unless you were most of the passengers — members of Kansas University’s women’s basketball team.

“It felt like an eternity,” sophomore Nicollette Smith said. “I couldn’t sleep, either, and that made it even longer.”

Echoed junior Sade Morris: “It was the longest bus ride ever. It was horrible.”

But it’s history now. The Jayhawks’ deflating 72-39 loss to Kansas State that night was wiped out with a 75-58 thumping of Missouri on Wednesday night in Allen Fieldhouse.

Morris and Smith were the ringleaders of the bounce-back with 36 points between them. Morris matched her career high with 20, while Smith counted a season-high 16.

Yet Morris and Smith supplied more than points. They had also provided purpose during Monday’s practice session.

“They were fussin’ at everybody,” KU coach Bonnie Henrickson said. “We were 10 minutes into practice, and Nic and ‘De let them have it.”

Smith and Morris were mad, and weren’t going to take it anymore.

“It was our first practice back,” Smith said, “and we were horrible. We had talked about playing better after K-State, and we kept messing up.”

Added Morris: “It wasn’t any different than Saturday, so we screamed at the top of our lungs to do it right.”

“This was exactly the way we want to play,” Morris said.

For the first 13 minutes, neither team had any breathing room. At that stage, both teams had 21 points. Then the Jayhawks, fueled by three Morris baskets, went on a 9-0 run and Mizzou never challenged again.

Notably, the Jayhawks continued their deadly three-point shooting. With Smith drilling four of five shots — three in the first four minutes — from beyond the arc, KU made 7-of-11 overall.

Kansas went in ranked No. 2 nationally in three-point field goal percentage at 40.8 percent and boosted that number to 42 percent.

“Tonight I was just feeling it,” said the 6-foot-2 native of Tulsa, Okla. “The three-pointer is my thing.”

Curiously, though, Smith is shooting just 38 percent from inside the arc.

“I guess I’m too close to the rim when I’m inside,” she said with a smile.

About the only thing the Jayhawks didn’t do well was protect the ball. KU was charged with 20 turnovers. Torrid shooting made up for that deficiency, however.

After the humbling at Kansas State, Henrickson said she didn’t dwell on it. In fact, she said she and her staff haven’t mentioned it since they walked out of Bramlage Coliseum.

“I didn’t beat them up with it,” she said. “It’s a long season, and you can’t carry that in your bag with you.”

And so it was Missouri that had to make a long bus road back to Columbia, Mo., in the wake of a poor performance.

“Nothing would drop for us,” MU coach Cindy Stein said, “and you have to give Kansas credit for that. It’s just so disappointing. Our kids were fired up.”

Particularly woeful for MU (9-6 overall, 0-2 Big 12) was leading-scorer Jessra Johnson who missed 14 of 16 shots and scored only six points, eight fewer than her average.

Next for the Jayhawks will be Texas Tech at 7 p.m. Saturday in Allen Fieldhouse.

Way to kick butt, ladies. It appears you have some good leaders on the team that won't let a bad loss turn into another bad loss.

The road to Columbia is always long.Great leadership both to step up as well as to do it in a way that your teammates will follow. Great job by all. Rock Chalk!Where are the whiners this morning?

How was the attendance? I have to admit, when I was at KU from 2004-2007 I did not attend a single women's game. But if I were there now and they were playing how they are, I would definitely go. We've got some playas.

Loved it. Where I was had an influx of Mizzou fans that left in Mizery after the game. That made my week.Rock Chalk Jayhawks! Go KU!

Attendance was counted at 3169, but it didn't look like that many. They deserve better.

and probably get better (Attendance) if this site did the blue next game box for them as well....

Omegatron...I totally agree. The LJW coverage of women's athletics has always been ridiculously non-existent. Unfortunately, much won't change until the women start having some success again. Fair-weather reporting...

Yeah, I am not surprised that the LJW doesn't report things equally. It's a very, very conservative newspaper. It's always been like that, even when my folks went to KU in the 60s.

Conservative? I was always under the impression that they were just plan lazy... My Bad.