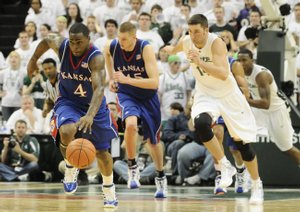 Mario Little, who must decide by Tuesday night whether to apply for a medical red-shirt this season, hoped to test his left leg Saturday at Michigan State.

“I really didn’t get to do anything,” said Little, who because of foul problems had a short, seven-minute stint in the Jayhawks’ 75-62 loss.

“I’m not even hurting right now. I was. I mean, I had been,” he added of some problems with the stress fracture in his lower-left leg after the Tennessee game eight days ago.

“Defensively I can move better than I thought I could. It’s something I really have to do a lot of thinking,” Little added.

He already has discussed pros and cons of red-shirting with several individuals.

“A lot of people are telling me this, telling me that,” he said. “I want to come back strong next year and help the team. I also want to help right now. Sherron (Collins) needs some help out there.”

“I was hoping I could watch Mario play today. He played seven minutes. I thought he moved OK, but I thought he was very ineffective based on not ever getting in the flow,” Self said of Little, who had three rebounds and no points. “I don’t think today really told me anything concerning his future status applying for a medical hardship or playing on.”

Little’s braintrust back home in Chicago — led by uncle O’Keefe — said there’s a “strong possibility” Mario will red-shirt so he can play two healthy years at KU.

“No sense going 45 to 50 percent,” O’Keefe Little said. “I don’t like what I saw the last two or three games. He has a swagger (normally). He doesn’t have the swagger. He has pain in the leg. He’s trying to shoot with the glove (on left hand to protect broken bone). I want him to be fully informed, but the decision is his and his alone.”

“After a couple of figure eights (on snow packed highways), we made it here,” O’Keefe said.

Mario’s grandmother, Hazel, could not attend. She is in a Chicago hospital with a case of internal bleeding.

“She has taken a turn for the worse. They gave her seven pints of blood,” O’Keefe said. “We need to get back and see how she is doing.”

Referee Steve Welmer was injured in the first half. He hobbled out of the arena with a boot on his foot.

Collins and Cole Aldrich scored 63 percent of KU’s points. ... MSU has won nine games in a row, 27 straight at Breslin. MSU has won 39 straight against nonconference foes. ... The series between KU and MSU is tied at 4. ... Aldrich had his third straight double-double and ninth overall this season. Aldrich also shot 75 percent (6-for-8) from the free-throw line and blocked three shots. Aldrich has recorded multiple blocks 12 times this year. ... Kansas trailed, 37-18 (19 points), at halftime. It marked the Jayhawks’ largest halftime deficit since Feb. 23, 2003, when KU trailed, 47-26 (21 points), at Oklahoma. ... Kansas’ 18 points in the first half were KU’s fewest points in a half since Feb. 28, 1999, when KU also scored 18 points in the second half at Iowa State.

Little needs to listen to his uncle. He wont help this team unless a miracle occurs. We get our lumps this year but come back roaring next year. Slowly I am realizing you don't lose an entire starting lineup and do much the next year with two underclassmen and mostly Freshmen. I was hoping we had a Fab Five like Michigan did a few years ago. Not so. You got to rebuild. I hope Collins' first half play against MSU doesn't mean he is reverting to some of his less than desirable play of last year. If he isn't playing under control we are really in for a bad season.All that said, MSU is a good, tough veteran team with an excellent coach. Like 'em or not. They make you look bad. If they shot a little better they might be national champions.

As much as I would like Mario to play this year, I just don't think he will be very effective. He might grab a few rebounds here and there, but offensively, he is completely out of rythm, which you might expect since he was out for so long... Let's just redshirt him, and give his minutes to Releford...And I hope Coach Self really goes after the twins and QT. These 3 guys need to STEP UP!

Dear Coach Self,Stress fractures are always vexing to coaches, doctors and the person with the fracture. They are not binary--broken, or healed. They are fuzzy until healed. They hurt intermittently and pain changes nonlinearly. They often do not heal as fast, because the patient thinks he is not that injured and so does not take as much precaution to protect the injury from reinjury as typically occurs with a simple fracture. And, most confounding of all, the impacts of exercise stimulate calcification of the bones and so might conceivably, in some rare instances where a player is very near healed, even accelerate healing...if he does not cross the invisible threshold of stressing it to the point of refracturing it. But IMHO, you are presently in an OsteoIraq--a bone quagmire--a calcium hole you are trying dig out of but are instead boring deeper down.Here are my suggestions of how to move forward from this situation.1. Immediately declare that Little is not going to be redshirted, but that he is also not going to work out or play further until he has no pain...probably sometime in mid February. At that point, he will try again.Or...2. Declare him redshirted and put it entirely behind you and Little and the Team.I vote for Option 2, but you da man.And tell the LJW to quit interviewing Little's uncle. Little's uncle is a good man, but he doesn't know any more about stress fractures than any of the rest of us. The LJW is just pushing the human interest angle to stimulate readers, not to learn more about his fracture. If the LJW really wanted to get serious about this story, they would interview bone specialists and ask them their opinion of whether or not KU's doctors and you were doing the right thing to let Little keep "testing" it? I suspect they would say probably not.We know you are a master at getting people to perform with injuries, when they probably think they can't.We know the team needs Little to reduce the risk of double digit losses.We know this team could be very good, if Little were at his best.But Little is not at his best and probably will not be this season. Double digit losses are less crucial than Little's well-being and the team's well-being.The team cannot move forward as much, if you keep composing the team around the kind of play that Little will be able to slot into if and when he returns, as if the team's style of play were realigned to be the best that it can be without Little this year.The team without Little can still be a very good team, but it needs time to achieve that identity.I say start the process now and let Little fit in however he can late in the season, or next year.Stop digging the hole deeper.

Quite honestly I dont see Mario contributing at all this year. Redshirt.The injuries have taken a toll on his progress with the team this year.... He's not in shape, and looks lost out there. 7 minutes. 5 fouls. Enough said.We're 11-4 without his contributions. We'll be fine.

I wouldn't let his non-contibution against MSU cloud the decision. He's obviously close to recovery and has plenty of time to contribute. It would be great if coach Self had at least another week to decide, because this close call.

doolindalton. I doubt KU could be champions if they shot a little better against MSU, and I doubt you believe that. Against some their opponents KU didn't suffer from poor three point, free throw, or two point shooting, even when they lost. Regarding MSU, I hope you knew I meant that they could be national champions if they shot more consistently in all of their games. I know, as you must, that basketball requires more than making baskets. As much as I hate to admit it MSU is better than KU in a variety of ways. They ought to be they are much more experienced. Hopefully you were merely expressing disgust either because you were depressed that KU lost or you dislike MSU. While I am neutral regarding MSU, I too wish KU had won. I have lived and died with them for about 65 years and losing feels as bad now as it did when my hero Charlie Black played.

It was a bad shooting day all around. Reed, who had something like 16 of 17 free throws for the season so far, missed both opportunities he had.

Don't know if Little is over-rated, injry prone or what. He has not proved ANYTHINGat this level, other than he is brittle.Redshirt him and get the team to "man up". The frosh have enough problems already with maturity. Don;t confuse them more with a medical problem. Play the Frosh and take the lumps NOW and not this year and next year both!

As I stated in an earlier post, he got to play in Canada, he has practiced much of the semester and has even got into some games. This is like a free pass from the NCAA if he redhirts. He still gets to practice and travel with the team. He still gets to learn about the demands of Div. One Ball and what he'll need to do to maximize his effectiveness. He won't hurt the team by not being there since he has mostly been a non factor anyway. And he gets two years at 100%This is not brain surgery or nuclear physics....REDSHIRT!!!!

I kept looking for Jaybate's critique of the game but never found one. I guess he has to earn a living otherwise as well. I still like his analysis better than the LJW, although I thank them for allowing these posts. I like almost all of Bedore's columns and some of Mayer's, but Jaybate goes into more detail and understands the game. To each his own.