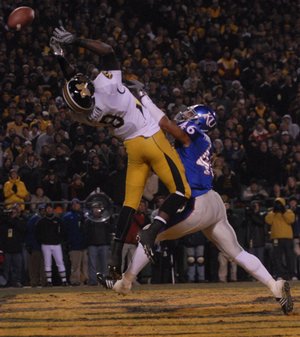 Kansas' Justin Thornton (46) breaks up a pass intended for Missouri's Jeremy Maclin in the Border War on Saturday, Nov. 24, 2007 at Arrowhead Stadium in Kansas City, Mo. 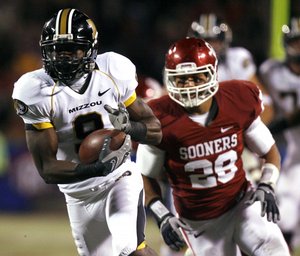 The two-time All-American announced his widely expected decision to turn pro Friday — but not before breaking down in tears at the microphone before a crowd of reporters, grateful teammates and coaches.

"This decision hasn't been easy," Maclin said, adding that he didn't completely make up his mind until 10 minutes before the news conference. "As much as I love you guys ... I feel like I'm ready for the next level."

The 6-foot-1, 200-pound Maclin scored 17 touchdowns and caught 102 passes for Missouri this season while leading the nation in all-purpose yardage, helping elevate the Tigers to national prominence with a brief stint at No. 1 in the late-season rankings last year and consecutive appearances in the Big 12 Conference championship.

As a freshman, he scored 16 touchdowns and immediately electrified a program mired in mediocrity for years. Maclin sat out his first year in Columbia after injuring his knee during summer workouts, but announced his presence in the 2007 season opener with two touchdowns in a home victory against Illinois.

He totaled 2,833 all-purpose yards this season — fifth-most in NCAA history — and capped his career by igniting Missouri's comeback victory over Northwestern in the Alamo Bowl with a third-quarter punt return and then catching the game-winning touchdown pass in overtime.

Several mock drafts have rated Maclin as a first-round pick, some projecting him for the top 10.

"He's the elite of the elite," said assistant coach Cornell Ford, who helped recruit Maclin. "He set the bar for this program."

Missouri coach Gary Pinkel said he gave Maclin his blessing to move on to the NFL.

Pinkel said he knew right away that Maclin was a special player. He recounted driving home after the 2007 game against Illinois and telling his wife, "We've got a superstar here."

Maclin said that the specter of another, potentially career-ending injury loomed large in his decision to leave early.

"It's definitely something you think about," he said. "In a worst-case scenario, you get hurt and you can never play football again."

Missouri finished the 2008 season at 10-4, collecting double-digit victories in consecutive years for the first time in school history.

With a high-powered spread offense led by 2007 Heisman Trophy finalist Chase Daniel at quarterback, the Tigers began the season with expectations of contending for a national championship. But those dreams faded following an upset loss at home to Oklahoma State, a lopsided defeat to then No. 1-Texas in Austin and a 41-point drubbing by Oklahoma in the conference title game.

Good luck Mr. Maclin,The future of the Big 12 North title looks bright for the Hawks next year. This is almost bizarre to say it but the expectations for the Jayhawks to win the Big 12 North are quite huge for next year. I dare say anything less will be somewhat of a disappointment.

I wouldn't mind seeing Maclin drop to 34 and having the Chiefs pick him up.

Maclin is a talented, scary (if you are for his opponent) player. I wish hime well.

As of the moment, Kansas is the favorite to win the North next year, but I think we all know that the North Title game will be Kansas vs. Nebraska in Lawrence next year...

I hope Nebraska is the pre-season favorite to win the north. We play our absolute best when the nation, and the region aren't thinking about us. Chicago Ed forgot a couple other big ones that will proabably affect KU even more. Joe Ganz (That will be huge for us) and Missou is loosing a LOT Chase Coffman (With Maclin gone, the rookie needs to start from scratch) Saunders, Moore, Christopher, Hood, and the kicker. Like everyone is saying, it WILL come down to Kansas vs. Nebraska in Lawrence next year.The last two matchups there the score is 116-54. I like our chances, especially if hold off the husker fanbase a little, and get a night game with a national audience! I CAN'T WAIT!

Jesus, he absolutely fell apart. I haven't seen crying like that since Roy left.Especially weird since there is absolutely no way in hell he stays another year at Missouri. They lost everything. They are going to suck next year. What possible reason could you come up with to stay?"Let's see. I can make a million dollars, or hang around and get my ass kicked by my most hated rival. Hmmmm".

He'll be making a LOT more than a million dollars photo

Not the first time we've seen an athlete cry but what an embarrassing event. When Fox Sports compiles their top 10 list of the most awkward moments, this will get serious consideration for the top spot.

The BIGXII North title goes thru Austin, Lubbock, and Lawrence on 2 weekends (OU & NU). While we may be favored to beat NU at home, and they have a relatively tough road schedule, we have a tougher S schedule which is likely a big factor in the N title. We could be 5-0 against the N and still finish in 2nd due to the tougher S schedule. Winning against NU, MU, KSU, and the rest of the N is great, but doesn't assure anyone of the division title.That being said, I love the way Mangino and staff continues to 'saw wood' in building the program. Fortunately, he turned away from the flash/smoke & mirrors/JC/cupcake method he saw down the road, and went to the long term development method. Glad that the AD has embraced it as well.It is good to be a Jayhawk.