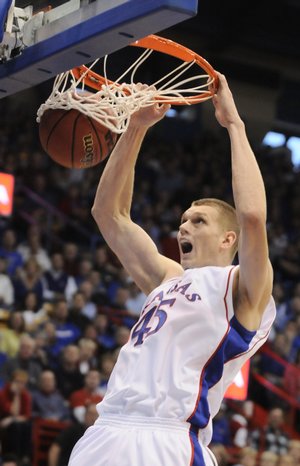 Barnes in the barn

Harrison Barnes, a 6-foot-6 junior forward from Ames (Iowa) High School, attended on an unofficial recruiting visit and sat behind KU’s bench. Before the game, Barnes left his seat to shake hands with Tennessee coach Bruce Pearl, who had wandered to KU’s side of the court to visit with the Jayhawk coaches. KU and Tennessee are on Barnes’ list of schools, with Duke, Iowa, North Carolina and others.

“I try to go up and rip the rim down every time I get the chance,” the 6-foot-11 Aldrich said.

“I am a big fan of that particular shot,” KU coach Bill Self said of the slam. “I think we played Albany and got zero dunks in the game (Dec. 30). I don’t know when the last time that happened at Kansas is.”

“I just try to do that every game. I try to go up and block shots, and if I can’t get it, I try to alter it. Not many teams are used to having a big guy who can really block shots. Once in a while we would get beat, and I was able to help and block shots,” Aldrich said.

Self was hit with a technical foul with 4:42 left in the first half, with KU up, 35-22. He was incensed Quintrell Thomas was called for a foul while setting a screen.

Did Self deserve it?

“Probably,” Self said. “If he (ref) thinks he’s right, (and) I think I’m right, I’m OK with that. That’s no big deal. What was said between us bothered me more than the call. I certainly thought I was right on that one ... must not have been, though.”

Tennessee’s Tyler Smith was called for a ‘T’ for making contact with the ball as Brady Morningstar tried to inbound in the second half.

Jeff Withey, KU’s 7-foot freshman transfer from the University of Arizona, tells Rivals.com he will officially make the move to Lawrence on Jan. 18. He plans to attend the KU-K-State game as a fan on Jan. 13. Withey can practice with KU’s team but not play in games until December, 2009.

Sherron Collins and Aldrich combined for 48 of KU’s 92 points. However, KU’s first 15 points of the second half were scored by Tyrel Reed (eight), Marcus Morris (four) and Morningstar (three).

“It’s very significant,” Self said, adding, “Cole and Sherron will play better if they feel they don’t have to do most of the things.”

Collins’ 10 free throws in the second half were the most makes by a Jayhawk in a half since Wayne Simien made 11 in the first half against Colorado in February of 2005 ... Tennessee’s 10 blocks were the most by a KU foe since Colorado swatted 11 in January, 2006. Wayne Chism’s six blocks tied UMass’ Tony Gaffney for the most by a KU foe this season. ... Aldrich had career highs in field goals (10) and attempts (14).

wouldn't it be hilarious to bring in a kid from the frontyard of another school in your own division? too funny......if Mr. Barnes didn't enjoy that atmosphere, that was in AFH yesterday, then he has no pulse. it was jumping for sure. C'mon Harrison...we'd love to have you in Lawrence in 2010

We had a lot more back door and alley-oop baskets yesterday against a good defensive team. That my friends, means that HCBS and Danny are coaching these boys up, and that it is starting to sink in. Just wait till March!

That's great news, chuckberry. Of course the number that I keep thinking of is 62, as in if this team can survive this season's home games there's no reason to think they wouldn't have an excellent shot at breaking KU's record of 62 in a row at home.