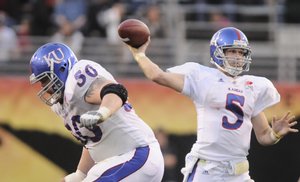 In combining for 24 catches and 314 yards, Kansas University standout receivers Kerry Meier and Dezmon Briscoe made life miserable for a Minnesota secondary not accustomed to the explosiveness of a Big 12 offense.

They also made history.

For the first time since the program’s inception, the Jayhawks had two receivers each reach 90 receptions and surpass 1,000 yards in receiving. Meier finished the year with 97 receptions, 1,045 yards and eight scores; Briscoe added 92, 1,407 and 15.

Before this season, no KU player had recorded more than 70 receptions in a single season — previous receptions leader Richard Estell finished with 70 in 1985 — and the Jayhawks never had more than one player reach the 1,000-yard plateau.

When it came to light that Kansas cornerback Justin Thornton would miss Wednesday’s Insight Bowl for disciplinary reasons, it figured to be a significant setback to coach Mark Mangino’s team.

And for a good stretch of the Wednesday night’s game, it was.

On consecutive drives in the first quarter, replacement Kendrick Harper, a senior, was beaten on a 75-yard wide-receiver pass to Eric Decker and later a 29-yard reception by Brandon Greene. Both drives resulted in Minnesota scores and allowed the Gophers to take an early 14-7 lead.

Later, however, Harper provided a bit of redemption, helping to keep UM running back Shady Salamon out of the end zone on third-and-goal from the one. The drive resulted in a turnover on downs.

Despite missing multiple days of practice this week because of the flu, Kansas running back Jake Sharp recovered enough to rush 16 times for 64 yards and a touchdown against the Gophers on Wednesday.

Sharp finished his first season as the team’s primary back with a career-high 860 yards and 12 touchdowns.

Great season for Briscoe and Meier, and for their common denominator - Reesing.

They are the 3 of the 4 best players on the team, with Stuckey being the fourth.