KU head coach Mark Mangino looks on from the sideline as the Jayhawks take on Missouri during the Border Showdown Saturday, Nov. 28, 2009 at Arrowhead Stadium. 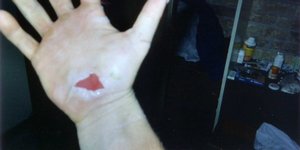 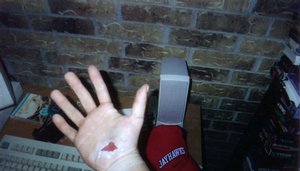 No word on Mangino's status

Amid circulating rumors, there has still been no action taken with football coach Mark Mangino. An investigation into his conduct is still in progress.

Amid denials from Kansas University football coach Mark Mangino that he has physically and verbally abused players during his eight-year tenure in Lawrence, one former player has provided documentation of mistreatment he says he suffered under the coach.

Cory Kipp, a defensive lineman under Mangino in 2002 and ’03, told the Journal-World this week that he endured significant injuries to his hand as a result of a punishment carried out by the coach — a claim backed up by multiple former players, as well as photos taken shortly after the incident.

“It must have been the worst pain I’ve ever felt,” Kipp said.

Mangino, the subject of an internal university investigation into his treatment of players, could not be reached for comment Tuesday.

According to Kipp, who started all 13 games at nose tackle during the ’03 season, the incident transpired as follows:

At the beginning of an afternoon workout in August of ’03, Mangino told Kipp to see him after practice to undergo punishment for the player’s failure to weigh-in earlier that day.

Kipp figured the punishment would be running “cross-fields” — something he and another former player said was a typical penalty for such an infraction — but was instead told to “bear-crawl” across the AstroTurf field at Memorial Stadium on his hands and feet.

Kipp began the crawl and, after moving several yards, felt a burning sensation in his hands. On multiple occasions, Kipp said, he stopped to complain that the turf was burning his hands — according to a University of Arkansas report, artificial playing surfaces have been documented at up to 199 degrees in temperature — but was ordered by Mangino, who was walking alongside the crawling player, to keep going.

By the time Kipp had finished, the skin near the heel of his hand had been completely seared, and photos provided to the Journal-World depict blistering and a sizable area of missing skin.

As a result of the injury, Kipp said, he was forced to undergo extensive treatment on his hand by then-head football trainer Carol Jarosky throughout the next three weeks, and although he said at least two members of the coaching staff were aware of the injury, he was told to practice through it.

“It wasn’t like because my hand was burned, I took a couple days off,” Kipp said. “They made me practice.”

Each day for three weeks, he said, Jarosky — who did not immediately return a phone message seeking comment — would treat and wrap the hand before workouts, using multiple layers of padding. But in the days immediately following the injury, Kipp said, he would return to the locker room after practice with the padding soaked through in blood.

Asked to examine the photos for his opinion on the severity of the damage, Birmingham, Ala.-based dermatologist Conway Huang confirmed the injury was either frictional or heat-related.

If heat-related, Huang wrote in an e-mail to the Journal-World, it was consistent with second-degree burns.

Since allegations arose two weeks ago that Mangino had regularly verbally and physically abused players, however, the coach has contended that he has done nothing inappropriate in his running of the program.

During his weekly radio show Nov. 19, for instance, he lashed out at former players and parents who had spoken out against him, insisting their allegations were an attempt at “15 minutes of fame.” Asked following Saturday’s 41-39 season-ending loss to Missouri whether he’d be willing to tone down his approach if implored to do so by university administrators, meanwhile, he responded, “You’re coming with the assumption that it needs toned down. How I coach is how I coach. Ninety-nine percent of the kids here appreciate it.”

Three other players contacted by the Journal-World confirmed the incident, including Sid Bachmann, a defensive tackle on the ’02 and ’03 Kansas teams, and former fullback Austine Nwabuisi.

Despite the severity of the incident, Kipp said an apology — or any sign of remorse on the part of Mangino — would have been enough to move on without any hard feelings.

“If he said that he was sorry, and he didn’t realize (the turf) was that hot, then I would have accepted his apology and that would have been that,” Kipp said. “But I never got that.”

What’s more, during a team meeting later that season, Kipp says Mangino brought the incident up in front of coaches and players — a story confirmed by Bachmann.

After pointing out a tackle that Kipp had missed during the previous week’s game, Mangino allegedly threatened to burn the player’s other hand if he ever missed a tackle again.

“I looked at some of the assistant coaches when (Mangino) said that, and they just had their heads down,” Bachmann said. “Our (defensive line) coach had his head down and he was just shaking his head.”

At the urging of his roommate, meanwhile, Kipp took photos of the damage following the incident and strongly considered approaching athletic director Lew Perkins before deciding against it due to fear of retribution — namely, worries over a potential decrease in playing time or the revocation of his scholarship.

Kipp, who now lives in California, said he was prompted to come forward after hearing Mangino’s denials of earlier allegations involving his mistreatment of players.

“I’m doing this,” Kipp said, “because I’ve got proof how horrible a coach he is.”