Kansas senior defensive back Justin Thornton had just one interception last season, following the five he pulled in his sophomore season. 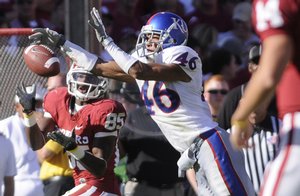 Kansas cornerback Justin Thornton (46) breaks up a pass intended for Oklahoma receiver Ryan Broyles in this file photo from Oct. 18. Thornton started the season at safety but moved to corner, a move that has helped improve the Jayhawks’ pass defense.

Why the decrease in thefts?

“I can’t give you an answer for that one. I really don’t even know, to tell you the truth,” Thornton, a 6-foot-1, 213-pound senior safety from St. Joseph, Mo., said, when asked if opposing quarterbacks tried to throw away from his side of the field.

“It’s always nice to have the interceptions and be up there in the stats, (but) I just go out there and give it my all. If I’m rewarded for my hard work, then that’s what it is. My No. 1 goal is to win.”

He does admit it was nice to share individual interception honors with Talib two seasons ago.

“Any time you can match the stats of an All-American, first-round draft pick is something to be proud of,” Thornton said, adding, “that’s in the past, a few years ago. I’m ready to come back and do what I can to help the team.”

Thornton — he started the first seven games last season at free safety and the last five at corner — led the Jayhawks with 11 passes broken up. He also was fifth on the team with 63 tackles, recording a season-high nine tackles at South Florida.

Thornton’s career high in tackles also was his sophomore season when he had 16 against Missouri.

He was asked if that proved to be his favorite game in his KU career.

“It comes close with the Orange Bowl, with the simple fact I’m from Missouri. There were some emotions in the game,” said Thornton, who has been moved back to safety for his final season.

It remains to be seen if KU advances to a BCS bowl again his senior season.

Thornton is hoping a strong season will culminate with his being selected in the 2010 NFL Draft.

“It’s the goal of every player who steps out there. If you don’t have the goal of being the best, you shouldn’t be out there,” Thornton said. “It’s in the back of all our minds. Every guy on this team has it in their minds somewhere or another.”

He knows how to reach the highest level.

The hard work of Thornton, who chose KU over Missouri in recruiting, has rubbed off on some of his teammates. He’s a candidate for team leader on defense.

“He is vocal, very helpful and a good person,” said junior defensive back Chris Harris. “He’s a difference maker. He can make plays.”

“Coming over to cornerback from receiver last year, he helped me out a lot,” said soph corner Daymond Patterson. “J.T. is a big leader in the secondary. Moving from safety to corner .. he never complained at all. He’s helping the younger guys become better players.

“He’s a classy guy, always telling us to do the right things. He’ll never steer you the wrong way. Guys go to Stuckey (Darrell, senior safety) or him for advice.”

Defensive coordinator Clint Bowen likes the fact Thornton is willing to talk on and off the field.

“J.T. is a vocal guy. He’s older now and been through the battles a bit. He’s one of those guys who doesn’t mind saying what’s on his mind,” Bowen said. “That’s good. He can talk to other kids and say, ‘We’ve got to get this done.’ Some kids are not as confrontational. He has no problem pointing out the things that need to get done. He’s good with that.”

Thornton is not as colorful with the media as, say, Talib, now with the Tampa Bay Buccaneers.

“We are two totally different personalities. I’m not as outspoken as he is. That’s the way I am,” Thornton said.

In a recent interview session, he wouldn’t even talk trash on rival Missouri, the team that recruited him as hard as KU did.

“I think Mizzou has a hold on St. Joe pretty much,” Thornton said of more St. Joe players winding up in Columbia, Mo., than Lawrence. “I was born in Atchison, Kansas. I’m a Kansas boy. It wasn’t that hard for me to make that decision.

“I wouldn’t take it back for anything. Everything has worked out for me. No regrets.”

Still a lot of KU fans in St. Joe though. KU needs to keep expanding our reach there. A lot of the Jayhawk network games for basketball aren't on TV there.

St Joe seems to be Jayhawk country Hawkfan-I love St Joe and would love to see us blanket it in Crimson and Kansas Blue!

Yep Royal...just saw that too. Not good when the Bucs have penciled you in as a starter. I realize we don't know all...or any at this point...of the details, but can't these guys just stay out of trouble long enough to have a nice Pro-Bowl career? After you retire and cash all those paychecks...THEN go crazy bananas! But until then...sheesh!

Sorry for the repost...it wouldn't show up for about a half hour...?

Interesting to hear that JT has moved back to safety this year. Had heard that one of the soph's had moved ahead of him on the depth chart. His experience at CB should be very valuable tho against the multi WR sets we'll see.

It will be interesting to see how we play against the north teams (NU, CU, MU) that seem destine to run the ball more this year. Will Mangino have a 4-3 in place by then, or will Stuckey/Harris/Thornton/? step forward into more of a JHolt converted DB role?

Um, this was not the Aqib article. Really, this is a SAD thing for our family, and it would be best to find out the DETAILS and SUPPORT SOMEONE YOU ROOTED FOR in any way you can. We were all so totally a part of supporting the aggressive side of this man's life, if that is what this boils down to.

But about the current article, the number of interceptions Justin gets seems more like the amount of precipitation a rain gauge gets: it depends on where they are at the time. He can't be everywhere at once, and I doubt you can 'read' a play much better than you can read the raindrops falling on your head. Since you need to have many rain gauges to get a really good idea of the amount of precipitation in a given area, I suggest that we speed up Thornton to increase his ability to be different places at nearly the same time.

not to be a d!ck onlyoneUinKansas but are you serious?!?!!? st. joe is an absolute trash hole! There are a fair amount of KU fans there but by far there are more methzuri fans and trust me I had the unfortunate pleasure of growing up about 15 mins from st joe (in Kansas tho) and it BLOWS!

I'm sure opponents threw towards Thornton just as much as they did Talib...the 5 interceptions appear real weak and look to be a direct byproduct of Talib as last year his INTS were way down.