For Kansas, the sky’s the limit 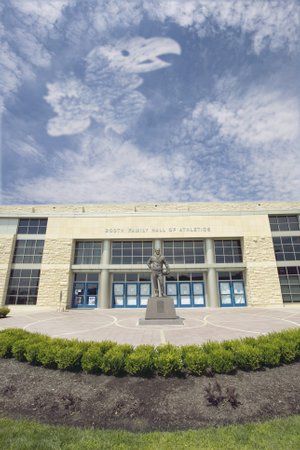 A year from now, sports talk revolving around Kansas University’s most high-profile teams will center on all the stars that coaches will need to try to replace. Lucky for you, it’s not a year from now, it’s now and this has the potential to become a perfect-storm of a year that could result in big winning seasons for KU’s football, basketball, women’s basketball and baseball teams.

Each of the four teams has at least one national superstar playing in his or her last season, and none of the teams can ever be mistaken as more a showcase of an individual than a cohesive unit packed with role players and stars alike.

To put a ceiling on expectations of what sort of year this could be for KU sports would be to invite a massive headache caused by poking through that ceiling.

Kansas will rank No. 1 in most college basketball preseason polls, yet any talk about star power for this coming school year has to start with the football team’s most dynamic player in decades. Senior quarterback Todd Reesing can’t see eye-to-eye with the passing records he has stacked up in his three seasons of action, the last two as a starter. The numbers that inspire the most pride in him: He’s 20-6 as a starter at Kansas. That sort of record would make him eligible for a Cy Young Award if he were a major league pitcher. Instead, he’s a bona fide Heisman Trophy candidate, just as he was during a sophomore season that intrigued a nation of college football fans who couldn’t take their eyes off of the elusive scrambler who throws such a catchable ball because it’s so accurate and delivered with such a soft touch.

Before Reesing came to KU, Frank Seurer (1980-83) and Mike Norseth (1984-85) tied for the school record for most career games with at least 300 yards passing. Each had four. Entering his senior season, Reesing has 13 such games. David Jaynes (1971-73) had the school record for touchdown passes (35). Reesing has thrown 68 touchdown passes for Kansas.

Games against Nebraska and Oklahoma highlight the Memorial Stadium portion of a most challenging schedule that includes a trip to Austin, Texas, to take on the Longhorns.

Come winter, for the first time in a long time, more than one team that calls Allen Fieldhouse home has the potential to captivate large audiences on a consistent basis.

The women’s basketball team became such a hot story in making it all the way to the WNIT title game that an announced crowd larger than 16,000 roared for the Jayhawks in April, a month that had always been quiet at the charming, old building. The good news: Every key player returns, including Danielle McCray, who during the summer started and helped Team USA to win a gold medal in the World University Games. McCray’s excited about the addition of point guard Angel Goodrich, who missed last season because of a torn ACL, but it’s fellow senior wing Sade Morris, a defensive stopper, whose presence means the most to McCray.

The women’s team will face many tough battles in the loaded Big 12 Conference, which should lead to many close games. As for the men, blowouts will be the rule, tight contests the exception.

Relentlessly aggressive senior guard Sherron Collins and his foot-taller sidekick Cole Aldrich, a junior who already made it clear this will be his final year of seasoning before he enters the NBA Draft, give the Jayhawks among the most talented handful of tandems in the nation, but it’s the depth of talent coach Bill Self has at his disposal that makes a second national title in three years a realistic possibility. Sophomore guard Tyshawn Taylor had a productive summer for Team USA, and sophomore forward Marcus Morris added strength, just one factor that could make him the team’s most improved player. Xavier Henry, a 6-foot-6 small forward from Oklahoma City, headlines another strong recruiting class that also features Henry’s brother, C.J., a guard, athletic power forward Thomas Robinson from Washington, D.C. and jumping jack guard Elijah Johnson from Las Vegas.

KU’s active 41-game Allen Fieldhouse winning streak will be difficult to snap, and it’s not the only remarkable home winning streak in Lawrence. Ritch Price’s baseball team, energized by a new, vastly upgraded clubhouse, went 25-3 at Hoglund Ballpark, otherwise known as The Hog.

Friday night starter Shaeffer Hall and shortstop David Nordowski were drafted and signed contracts, but most of the key players return from the team that made it to the NCAA Tournament. Junior third baseman Tony Thompson, likely in his final season at Kansas, finished the postseason with a .389 batting average, 21 home runs and 82 RBIs, numbers good for the Big 12 Triple Crown.

From Reesing’s scrambles and ensuing touchdown passes to Thompson’s tape-measure shots that fly out of The Hog, this has the potential to shape up as a year that will have KU almuni saying, “Remember the year,” for decades.

I also predict that there's going to be a lot of new t-shirts in Jayhawk fans' wardrobes in the next several months ...

I am as excited about anyone else about the chance for a great yeat at Campanile. But it's all just talk until it's done.

Aldrich said to my friend the day of this year's draft that he, "could be making millions of dollars today" followed by a comment about getting very drunk instead... You think he would put himself through that mistake two years in a row? Everyone gives him credit for being smart, let's assume he is and plan for his absence at the end of the year

I've never seen where Aldrich has said he'll definitely be gone, but Self said he wouldn't be back for his senior year the night Cole and Sherron announced they would be back for this year.