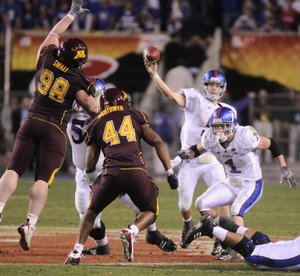 Kansas quarterback Todd Reesing heaves a pass over the Minnesota line as Jake Sharp (1) looks to make a block during the fourth quarter of the Insight Bowl in this photo from Dec. 31, 2008, at Sun Devil Stadium in Tempe, Ariz. Reesing and Sharp both return this season.

The Kansas University football team’s offense left little to be desired during a 2008 season in which it finished among the most potent in the nation.

Among their offensive accomplishments, the Jayhawks finished with a school record for passing yards per game (305.6), while posting the school’s second-highest total yards-per-game average (432.4) and third-highest points-per-game total (33.4).

In the process, they scored 35 points or more in a game nine times, including a 52-point showing against Kansas State on Nov. 1.

And with eight offensive starters returning this season — including a nucleus of quarterback Todd Reesing and receivers Dezmon Briscoe and Kerry Meier — 2009 looks to feature more of the same.

For one more year, at least, Kansas coach Mark Mangino and his staff don’t need to spend much time worrying about their team’s quarterback situation.

Senior Todd Reesing returns after throwing for 3,888 yards and 32 touchdowns and leading the Jayhawks to their second straight bowl game in 2008. Playing in the pass-happy Big 12, he finished the year in the Top 10 nationally in passing yards, passing yards per game (299.08), total offense (4,112) and completions per game (25.3).

In just two years as the starter, Reesing has broken nearly every significant passing record at the school, and with his top three receivers returning this season, he’ll look to propel Kansas to its first outright Big 12 North title in school history.

Kale Pick, a red-shirt freshman from Dodge City, figures to enter the season at the team’s No. 2 quarterback.

Following a slow start last season, Jake Sharp secured the starting running back spot after compiling 186 yards in a come-from-behind victory over Iowa State. He finished the year with 860 yards and 12 touchdowns (adding 25 catches for 283 yards) and returns for his senior season as the team’s clear starter.

There are question marks behind Sharp, however.

The summer departure of Jocques Crawford could open up a spot for true freshman Toben Opurum, a physical back out of Plano, Texas, who selected Kansas over Notre Dame and Florida. Rell Lewis, who rushed for 64 yards on 14 carries in the spring game, also could see playing time at the position.

As it was a season ago, the receiver position figures to be Kansas’ strength heading into 2009, led by standouts Dezmon Briscoe and Kerry Meier.

Briscoe burst onto the scene as a sophomore last season, catching 92 passes for 1,407 yards and 15 touchdowns and showing a knack for gaining yards after the catch. And despite missing most of the spring due to suspension, he is back with the team and figures to be one of the conference’s top offensive weapons in ’09.

Meanwhile, Meier, who is expected to leave his role as the team’s backup quarterback to focus on receiver full-time, has become Reesing’s go-to receiver, catching a team-high 97 passes for 1,045 yards, including arguably Kansas’ biggest pass last season — a 26-yard strike from Reesing in the fourth quarter against Missouri to give the Jayhawks a 40-37 victory.

While promising receiver Daymond Patterson — who had eight catches for 130 yards against Louisiana Tech as a true freshman last season — has moved to cornerback full-time, the team doesn’t appear to be lacking depth at the receiver position. Johnathan Wilson returns after a promising sophomore season, and he’ll be joined by Raimond Pendleton (four catches, 28 yards, one touchdown in the Spring Game) and Isiah Barfield (four catches, 49 yards).

Tim Biere returns as the likely starter after catching six passes for 65 yards as a true freshman, and he’ll get help from Bradley Dedeaux, who caught two passes in nine games last season as the Jayhawks worked mostly out of a four-receiver set.

The Jayhawks lose their three interior linemen to graduation — including All-Big 12 honorable mention selections Adrian Mayes and Ryan Cantrell — but return Jeremiah Hatch and Jeff Spikes, players who both earned freshman All-American recognition as tackles in ’08.

Despite some occasional struggles, the two improved considerably throughout the course of the season, and with Cantrell gone, Hatch will start the season at center, the position he manned in high school.

Tight end Tanner Hawkinson, meanwhile, has moved to left tackle to help fill the void left by Hatch, and he joins a slew of players with at least some experience on the offensive line, including guards Sal Capra, Carl Wilson and Ian Wolfe. Red-shirt freshmen guards John Williams and Trevor Marrongelli also figure to compete for playing time.

Be honest, Dugan. There's no way this took you more than 20 minutes to write. Absolutely zero research necessary to write this article. Just lazy.

QB ? - Has Kerry turned in his red jersey yet? RB ? - No mention of Porter? Is Sands destine for a redshirt? WR ? - An entire article yesterday on the promising new WR's, and now there is no mention. Do they appear to be getting PT this year or redshirts? And no mention of the next QB convert, AJ Steward, or was he missed at TE? OL ? - Will Ian Wolfe back up both RT & LT? Is Hatch getting any reps at OT in case there is an injury? Thorsen should be a decent reserve at C, yes?

Forgot about Darius Parrish moving to OT. That could make for a really strong 2 deep roster for the OL, and fairly young at that. Mostly F & S.

dagger108, I think I've got some answers to your questions.

QB - nope, Meier is still practicing at QB right now. It could change before the 1st game though. RB - Porter is looking really good in practice and should be in the mix. Sands looks to be destined to RS this year. WR - Mangino said during media day that a couple of the freshman WR are looking really good and he wouldn't be surprised if 1 or 2 of them work their way into the rotation this year. Surprising, considering how good and deep we are at that position already. OL - Yeah, moving Parrish over to OT makes the O-line really deep and talented looking this year. Like you said, mostly young guys too. Hatch is exclusively getting reps at C. On a side note, Hawkinson is said to be around 290lbs. now and many have commented that he looks "huge". So, I think we should be in good hands at LT.

I think that's the up-to-date answers to your questions, but maybe others have some more info too?

Guys — This story was written in advance for our KU Edition section that goes in the newspaper over the next few days. Because it is a special section, the stories are written two weeks in advance to make deadline. That's the reason for there being extra stories on the Web site this morning. It's also the reason that many of these stories seem a little bit outdated, as they were all written before media day.

Soooo . . . why do y'all bother reading anyway, if all you do is complain? Or is that the reason, to give your otherwise void lives a semblance of meaning?

I know this is KUsports, but some of you football heads might be interested in this info. Favre is on his way to Mpls to sign with the Vikes today.

I have to agree with most on here that if this was written two weeks ago, then don't bother posting it. With the technology now-a-days, information becomes old real fast.

thank you and ROCK CHALK!

The sentence, "There are question marks behind Sharp, however" just sits out there by itself with no support.

Regardless of whatever Sharp's limitations may be, the reader is left wondering what the hell the writer is talking about.