Kansas junior-to-be Daymond Patterson has made the switch back to wide receiver. 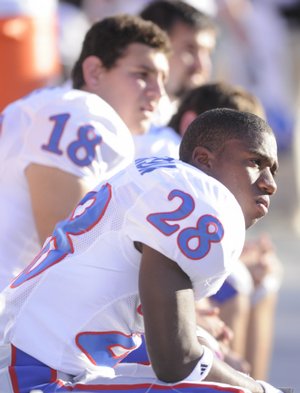 Kansas receiver-turned-cornerback Daymond Patterson (28) watches the waning moments of the Jayhawks' loss to Oklahoma in this file photo from Oct. 18.

There’s only one catch: The sophomore Patterson has to prove that he can be a dominant cornerback first.

Make no mistake: Patterson knows plenty about former Jayhawks Charles Gordon and Aqib Talib, who thrived under Mangino in the secondary before getting a chance to contribute as part-time receivers.

“That got me really excited, just to see where they ended up and then just trying to do a little bit of the same thing,” Patterson said. “Maybe there’s a little hope that I can get back over there.”

First, though, Patterson will look to prove that he can handle full-time duty as a defensive back.

The 5-foot-9 speedster from Mesquite, Texas, switched over from receiver to cornerback halfway through last season.

As a true freshman, Patterson didn’t have much time to adjust. He had just three practices in the secondary before making his first start against Texas Tech, one of the top passing teams in the nation.

In seven games at corner, Patterson contributed 21 tackles and two pass breakups but no interceptions.

He’s expecting more from himself this year.

“I don’t really have to think out there any more,” Patterson said. “I know where I’m going, and I know the defenses. I can make calls, and I can get guys in the right positions now. That makes everything a lot easier when you can just react instead of having to think always.”

KU defensive coordinator Clint Bowen said Patterson’s offseason improvement has been twofold: Patterson has increased his overall knowledge of the defense and also has started to learn some of the fine details that go with playing corner.

“Combine some fundamentals with his natural quickness and speed,” Bowen said, “and he’s light-years ahead of where he was.”

Patterson also looks to be the favorite to begin the season as KU’s punt returner.

Last year, he started better than he finished.

After returning four punts for 135 yards in the season-opener against FIU — including a 75-yard return for touchdown — Patterson had 18 punt returns for just 108 yards the rest of the season.

He also led the team with three lost fumbles.

After wearing No. 28 last season, Patterson has switched to his high school number — 15 — this year.

He said quite a few people had asked him if he was going to take the No. 3, which previously was worn by Talib and Gordon.

“I want to do what they did, but I want to let them have their legacy,” Patterson said. “I want to start my own legacy with No. 15.”

Talib and Gordon have helped Patterson with his transition to defense.

Talib, meanwhile, talked with Patterson about his technique during the offseason. Patterson recalled Talib telling him, “Hopefully, you can do the same things I did up there. Be a good corner and get to play on the other side of the ball as well.”

For now, though, Patterson will focus on cornerback — just like Gordon and Talib did during their early years at KU.

“The thing that those kids could do was make a special play that really had nothing to do with them,” Bowen said of Talib and Gordon. “I can’t tell you how many times Aqib Talib wasn’t anywhere near where he was supposed to be, and he would intercept the ball. Same with Charles.

“We’ll find out if Daymond has that ability just to make something happen.”

Daymond is saying all the right things, that's for sure.

I hope this kid has a fantastic career at KU!

I'm impressed that he feels comfortable enough out there already to just react and not have to think about what he's doing or has to do. That's a huge step forward and could be the beginnings of what some have speculated might be a big break out season for Patterson. I know he looked a lot better out there in the Insight Bowl than he did earlier in the season. I hope he does it and keeps progressing like those other two guys did!

I don't know about everyone else but I love Coach Mangino's two-way experiments!

Is this unusual or the norm in college football?

Here is a great article on Jayhawk Slant. Coach Bowen gives a very insightful breakdown of our Defense. Sounds like competition is high. Let's hope that we surprise some of the pundits, this year.

I love the fact that guys like Gordon and Talib are still providing guidance and advice for our guys. I always had an impression of Aqib as a guy that did his time here, got what he needed out of KU, and was on to bigger and better things. I can't say why I thought that, but I did. However, it sounds like he really is a Jayhawk through and through and still pays attention to the program and the guys in it. Glad to see that.

I really hope the secondary is as strong as it sounds so far. If we get even an average pass rush with those guys back there, the D will be MUCH improved over last season. We will need it if we are to have the successes we are hoping for this year.

I know this is a football article, but I have to say this. I want some new basketball news. Are the Henry brothers on campus yet? What did Cole have for lunch yesterday? What classes are the young men signed up for this semester? Something? Kansas is still first and foremost a basketball school. Don't get me wrong, we are making strong strides to becoming a duel threat (football and basketball), but at Kansas, basketball shall reign supreme. With that being said, give us some roundball updates!

Hopefully the days of the two-way threat are ending. Not because guys like Patterson don't have the ability, but because we are loaded at those positions. In the past the Charles Gordons and the Aqib Talibs have been more out of necessity because of lack of depth. I would hope that we are so loaded with dbacks and receivers that no one needs to play both ways.

BleedCandB- The Henry brothers are due to arrive today on campus according to shiver.com. Here is the article: http://theshiver.com/2009/08/henry-brothers-arriving-in-lawrence-tomorrow/#more-5768

I would argue that Talib didn't just play on offense during his Jr year out of necessity. I think that Talib played offense because everyone realized that every time he had the ball in his hands there was a decent chance that he might score a touchdown. After all, I think that we were pretty decent that season even when he was just playing defense. Of course we didn't put him in the offensive rotation that called played every once in awhile for him not more than a couple a game and I think there were several conference games when he didn't play any offense. Talib was an instictive football player. I think that Patterson may be faster than Aqib, and in the first few games last year it looked like he had the insticts. I can't wait to see what he does this year.

What vmwskywalk said........those days are most likley over. I don't see McDougald, Omigie, McGriff, or Terry (if he signs) making room for Daymond in the WR rotation.

A little off topic but did anyone hear about the new NCAA football rule of players having to shake hands before the game starts. I think it is a bit grade school what do you guys think. Also, I think it may cause problems in some heated rivalries, Tennessee vs. Florida comes to mind this year. I dont see how any good is going to come out of it when the players are already amped comming out of the locker rooms.

chrishauser20 - Not a good idea at all. Pre-game is woofing time. What's next - participation trophies for everyone and soccer tunnels with the parents after the game?

I always saw Patterson as more of a natural WR. His switch to CB seemed to be more out of necessity since our secondary was pourus. I can see Daymond being our ultimate utility player and changing the outcome of a game. Much time at WR, PR, maybe even KR and some time at DB. We have to get better depth at DB so Patterson can go back to where he is truly special.

He always seemed to have the potential of breaking it for a TD last year. Gotta get this kid the pigskin.

Thanks for the article chrishauser20. Now why is the local paper not reporting this? What else do you guys have to do down at the LJW offices. Get out there and give the people what they want. And the people want BOTH football and basketball news AT THE SAME TIME!! Do your jobs while you still have the and earn those paychecks, however big or small they may be.

Plastic-Good points, however I'd add that Talib played less at WR later in the season as Briscoe and Meier became more involved in the offense. I'd say before that happened we were thin at receiver.

dubya, thanks for the link. That was an interesting article. I like what I'm hearing about our defense. If our linebackers step up, we should definitely be better than last year.

very true skywalk... I had forgotten that Meier was also not a part of the receiver rotation early on. He came in mostly for bubble screens and for the threat of a double pass. Marcus Henry was solid all year, Dexton Fields was decent that year as well. Marcus Herford had his moments, and Briscoe came along very well. Through the non-con slate it looked initially like Talib was going to get quite a few reps on offense but as Meier and Briscoe came along Talib didn't get out there quite so often.

I agree with TaCity though Daymond was dangerous with the ball in his hands. He seemed to be a little more of an offensive minded player than a defensive player. Pre-season last year he was drawing lots of comparisons to Jeremy Maclin.