Above, Kansas University quarterback Todd Reesing, left, and running back Jake Sharp (1) take a break and visit in the Memorial Stadium stands during KU’s Media Day on Tuesday. At upper right is wide receiver Dezmon Briscoe. 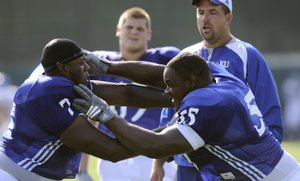 The Kansas University football team held its first media day Tuesday. The coach and players addressed the media and talked about their goals and expectations for the season.

To stay in shape, the Dallas native — and likely high-round NFL Draft pick if he chooses to forgo his senior year at KU — worked out at the KU student rec center. He dodged traffic while running through campus. And after a good stretch of this sort-of solitary confinement — his temporary dismissal left him banished from participating in team activities — he realized one essential thing: It would probably be best, in the future, to meet the requirements laid out by his team’s coaching staff.

“Throughout that break (when) I wasn’t with the team, it made me feel like I wasn’t a student-athlete,” Briscoe said during Tuesday’s football Media Day at the Anderson Family Football Complex. “I felt like I was just a student. The privilege of being a student-athlete is something that most people would love to do. Most people would love to be in my shoes.”

Since being reinstated for the start of training camp Friday, Briscoe has been a lesson in humility. He says he has apologized to a handful of teammates privately and called his suspension “heartbreaking,” adding that the offseason success of fellow receiver Johnathan Wilson has inspired him to regain the form that helped him set school records last season for receiving yards (1,407) and touchdowns (15).

And while it’s hard to spin his extended absence into a positive — as senior receiver Kerry Meier put it, “it’s definitely not good” — Briscoe said Tuesday that the experience has given him a newfound appreciation for the “blessed” position in which he currently finds himself.

“He feels like it’s behind him now,” KU coach Mark Mangino said. “And his attitude’s been good, and he’s having a really good camp. He learned a valuable lesson — like everybody does in life once in a while”

With his priorities apparently in check, the question now becomes whether the 6-foot-3, 202-pound receiver can catch up physically before the Jayhawks open the season Sept. 5 against Northern Colorado.

Briscoe said that his time away has resulted in some obvious rust — “With me missing the spring and a chance to get better, yeah, of course I’m a step back,” he said — although some signs indicate that the drop-off has been, at worst, marginal.

“Looking at him out there, I don’t think he’s missed too much,” Mangino said. “He’s made some mistakes that he normally doesn’t, but I think he’s fine. If you see the plays he’s made on the field, he doesn’t look like he’s lost too much.”

As for his teammates, there does not appear to be grave concern over Briscoe’s ability to impact games during the upcoming season.

“He’s the type of guy that can go out and perform, and that’s what he’s going to do,” Meier said. “He makes plays every day, and I’m not surprised the way he does it.

“Big things are in store for Dezmon this year.”

We need you Dez this year for any chance of BCS hopes..Keep ur head up Dez, when ya rollin, dirty...

I appreciated the quote "adding that the offseason success of fellow receiver Johnathan Wilson has inspired him to regain the form that helped him set school records last season for receiving yards (1,407) and touchdowns (15)."

Do the damn thing - Play hard use that inspiration to workout harder, and well be in good shape. Or as Mangino says, "Keep Sawin' Wood.."

Well I'm certainly pumped about our offense this year. Reesing could have some sick numbers with Wilson, Meier, and Briscoe to throw to plus a better O-Line this year; and I'm still saying that if we lose only one this year (I'm calling the upset over OU) he will win the heisman. (vegas has it at 35-1 and I'm buying)

But with the other article, I'm certainly more concerned about our D. We could have a very successful year with a monster O and a poor D but I just don't see that as where we want to be. Personally, I feel anything less than the big12 north title would be a disappointment. Thanks Mangino for taking our program to the point where I have such expectations, but darn it, I just want more.

You should definitely check out the Krug gallery. Some highlights I noticed. -Kerry has some guns. I mean the dude is yoked. The shot were he's making a catch. -Prinz Kande is sporting locks. Haven't seen that yet on a Mangino squad. In fact I haven't seen that at Kansas since Jeff Graves. I doubt they stay long for long. -Tanner (72) is definitely WAY bigger. Hope he's big enough. -Opurum in pads. The thunder.

And the video highlights. Well there is definitely some good stuff. But the thing that stuck out to me was Quigley getting mown over. Then wobbling around on the ground like a fighter trying to beat the count. Not good.

Dez is definitely saying ALL the right things. Hope it (the humility from the experience) sticks.

From the cover pix, is Jake that big or Todd that small?

chuckberry32 - Will we have a better O-Line this year?

It would seem that the jury hasn't even begun deliberation on that one yet. The development of the OL, DL, LB's is the key to this year's team.

todd is that small.

Did anyone wonder why Briscoe is sitting all alone in the picture at the top of the page. Are his teamates angry with him, is he just a quiet, shy guy, or did I just read (falsely) to much into a picture?

The picture is obviously staged and supposed to reflect the theme of the article that Dez is back from his "exile" or banishment or whatever from the program.

I guarantee that photo is not staged. Krug is an ethical photojournalist and has never set up his pictures.

Some newspaper shooters have been fired for staging pictures or digitally manipulating images in the past few years. Considering the severity of the punishment, I wouldn't make up rumors like that.

Check that, Mike Yoder took the picture, but I still stand by what I said. Mike is a good photographer.

still some ridiculous here. Prognosticators go away. You just belittle the whole drama of each game by speculating on the end record.... just like the talking heads who gum up the games on tv. Never any marching band anymore. Just recycling the stuff. I don't really care what anyone can see as a record for this team. It's not about you. We have great players and great chances. We get to watch Reesing, Meier, Briscoe and the rest. It will be great fun to see. I, for one, will let the coaches worry about how they do and what they prove. The orange and gold glows left me fulfilled and the teams have proven themselves. I'm just going to be entertained and cheer them on. course I'll have to skin a few cat types and corndogs along the way... who knows... maybe the Chiefs will whip the hated Raiders too...

BF Mangino keeps proving me wrong, because that squad looks more like a "program" every year. He may be somewhere around 4 buck 50, but you have one hell of a coach there in Lawrence. Keep it up Mark! Turn that basketball school into the new power football team in the north. Atta boy. Rock Chalk Jayhawks