Former Jayhawk basketball players Darnell Jackson, left, and Jacque Vaughn meet up before the start of the fifth-annual Red Dog Run on Saturday along the Kansas River levee. Jackson spoke to participants and thanked them for their support of the run, which benefited the Boys and Girls Club of Lawrence. Jackson later signed autographs at Dillons to raise money for the organization. 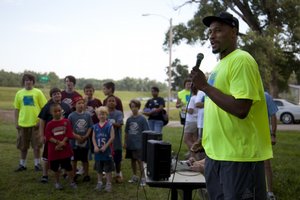 Former Jayhawk basketball player Darnell Jackson speaks to participants of the fifth-annual Red Dog Run shortly before the start of the race Saturday along the Kansas River levee.

A handful of spectators and competitors presented Darnell Jackson with donations to his favorite charity early Saturday morning near the Kansas River levee.

He then moved over to the Dillons on Sixth St. and Wakarusa. That’s where a steady stream of fans paid $5 per autograph, with all proceeds benefiting the Boys and Girls Club — an organization Jackson credits for transforming him from a self-proclaimed “troublemaker” into a solid citizen.

It was a three-hour show of support for the second-year Cleveland Cavaliers NBA player, who hopes to return to support the cause again next August.

“To me, it’s about raising money for the kids, not about people wanting to see me,” Jackson said.

The 6-foot-9, 253-pounder concedes he has an ongoing love affair with the people of Lawrence.

“This is home to me. I will get a house here eventually like the rest of the guys,” Jackson said of the many former KU players living in Lawrence, including guard Jacque Vaughn, who competed in Saturday’s Red Dog Run.

Jackson admitted, “I could be one of those guys,” when asked if he was one of the Boys and Girls Club’s proudest success stories. He discussed the work of the group in an article that appeared in Thusday’s Journal-World and is available on KUSports.com

“There’s probably a lot more out there with stories better than me. I’m just grateful to them. They teach you so many things that help you in the future, like being respectful to others.”

•A lot of sitting: Jackson, who was selected in the second round of the 2008 NBA Draft, averaged 1.9 points, 1.7 rebounds and 8.4 minutes a game in 51 games (two starts) his rookie season for a talented Cavaliers team that reached the Eastern Conference finals.

Jackson admitted it was tough adjusting to limited minutes after playing a significant role in helping KU claim the 2008 NCAA title.

“Definitely I was bored sitting on the bench watching the guys play,” Jackson said. “I was hoping coach (Mike) Brown would say, ‘D-Block, get in the game.’ Coach Brown is the boss. I’ve got to do the things he wants me to do to earn playing time.”

“Being myself. Doing the things I was doing last season, playing defense, rebounding and knocking down shots when I’m open,” Jackson said.

•Lots of gear: Jackson signed newspapers, magazines, hats, T-shirts and all sorts of KU gear at Dillons. About 15 fans were in line for the start of the 9 a.m. to noon signing session. ... Jackson addressed spectators and runners before the start of the Red Dog Run, indicating the importance of the Boys and Girls Club and how much it meant in his life. He also praised “Red Dog” — Don Gardner — organizer of Lawrence’s Red Dog’s Dog Days fitness program.

What a class act, DJ will go down as one of my favorite if not the favorite Jayhawk ever. Jacque, looked good, glad to see him too.

Surprised the article did not say that he also hosted a party at The Hawk for back to school days.

What a proud mother he must have. He is top drawer, first rate, a great person.

Thank you, lord, Nick Krug is back! And so is photo composition!

Now this coming season--a potentially big one--can be properly documented, however it plays out.

End note: please don't tell me these are photos from a year ago.

I don't think I'll ever grow tired of reading about Darnell. I hope he's still around town when my children are old enough to play sports so they can learn how a true athlete behaves.

Also, as I stubbornly continue to wear my now unfashionable hi-viz yellow cycling jacket when I ride each day, it is good to see some of the young fellows re-adopting hi-viz yellow as their colors.

I have always hoped some basketball team would wear hi-viz yellow uniforms just to jolt the game out of its hidebound conventions and also to get out of some of the gangsta uniform styles and colors that have arisen in recent years.

If I didn't love the crimson and the gold so much, I would like it if KU would don the hi-viz yellows for some special game as a new recurring tradition.

I know, I know, I have sinned for even hinting KU ever wear anything but crimson and blue.

Oh, my gawd... I accidentally wrote crimson and "gold."

I am now going down to the river for a dunking. A rebaptism.

last I checked crimson is red. Crimson and blue

JayBate-good to see you again! How will we get through the next 10 weeks until the season starts???

Hey Jay! (The Master) BATER - Last time I checked KU's colors were Crimson and Blue. NOT CRIMSON AND RED LIKE YOU SAID ABOVE...All my ascertains about your senseless and thoughtless typing (not thoughts cuz they aren't really thought as above) on here not being in a sober state have just been completely assured by this one right here.

I limited out on some outrageously big Dungeness crabs today and fixed a huge Crab Alfredo. I'm feeling too good to get down in the holes that you're both still digging.

Get a boat and get out in the sun. Your monitor burns are showing.

I don't know about you, but I plan on making fun of the depressed Calihawk33 and the clinically depressed soswalt4 a lot till then. :-)

October 15: so close, yet an eternity in a basketball lover's heart.

Two of the classiest Jayhawks ever to step foot in Lawrence, on par with Danny Manning & Dr. James Naismith.

One with an NBA championship ring & the other with an NCAA championship ring... Both with something much more important -- a gift of golden hearts, not weakened, but made stronger by being the best they can be. A gift of giving back, making a community stronger, happier, & just plain better. They embody everything good Lawrence is about.

Darnell is awesome and I wish I lived anywhere near Kansas and could attend the Red Dog Run.

I understand Crimson and Gold, being as I spent one year at Pitt State before honoring my calling to KU. Of course I always thought of the Crimson and Gold more as ketchup and mustard, which kinda grossed me out.

PS I.M.Pei's new Museum of Islamic Art just opened in Doha, Qatar..check it out!!! [And they said Islam and Modernism would never work......there's hope for this world yet!!]]

Thanks so much for the head's up about I.M. I have recognized he has been an enormous talent, but have never really loved his work much. This museum, however, is quite remarkable. It will take me awhile to digest it, but there are parts that appear to be genius for sure. Would that I had a trip planned to Qatar. I so love seeing new buildings up close and personal. Thanks again.

Now a professional question: why can't KU hire a "famous" architect to do the additions to Allen, if they insist on mucking it up with an addition, at all?

Do the most distinguished architects have fees that are too high for KU's budget?

Before you answer, let me say that I would much prefer hiring a graduate like yourself--someone with a respect and a feel for KU basketball tradition, than somebodies brother over in Topeka.

But, if the powers that be are not going to let someone like you do it, then why not go for someone like I. M. Pei, or a personal favorite, neo-functionalist Renzo Piano. Piano will work anywhere in the world, if there is an interesting architectural problem to solve in an interesting context and sufficient cash. Surely one or two of the superstar architects love basketball as much as we do.

Again, I would prefer it were you, or someone like you, getting the contract, even though I know your personal preference for leaving AFH alone would probably prevent you from proposing on the additions to AFH.

If Kansas City, which continually finds ways to kill off funding for its nose to spite its face, can somehow get Moshe Safdie to architect the Kauffman Center - Lew and his Can-do Crew could 'easily' pull off what you're suggesting. AFH would surely attract the likes of Pei, Gehry, or if only he lived a few more years, Jorn Utzon.

There is definitely a correlation to be had between Piano and the Phog. Something like Pompidou is to Parisians as AFH is to the Jayhawk Nation?

Very stimulating posts - not sure how D-Block and Jacque led to this, but maybe Matt Kleinmann will read and lend his expertise.

Darnell and Jacque, two of my favorite Jayhawk players ever. The other is Wayne Simien. Fourth Street, Wayne! Fourth Street!

Jaybate and finestack [the imagination runs wild as to the meaning of your tag!!]

Never underestimate the capacity for banality among the human species.

One of Architecture's great frustrations is feeling a job can be done better, knowing how to make the job better, seeing that the client has the capacity to direct the job to be better, then standing by helplessly and, if I may borrow Jaybate's most appropriate verb, watching the whole group" muck' it up. [Feel free to substitute the "F"...it certainly applies.]

There are days I wish I could have hit a curve ball and been a baseball player!!!:}

Thank heavens someone else loves Jorn Utzon. For a year, I kept an image of his own house as my desk top. Strange that I am not in love with his famous opera house in Australia, but his own very understated home was just about perfect for my tastes.