Schmidt: Autograph craze out of control 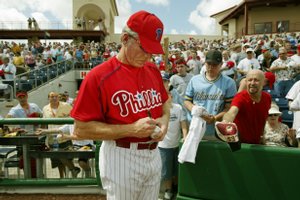 It was 1970, at the College World Series, where I signed my first autograph. I’ll never forget it: Our Ohio University team had just beaten No. 1-ranked USC in game one, and I was asked to sign a ball on the way to our bus.

What a high. Not the victory, but the elevation to celebrity status. Of course, that was back when an autograph was just that — a signature of a person obtained in remembrance of a moment, a place, an exchange that could be cherished for some personal reason. No commercial value was tied to it. No sneaking around security, no stalking, and no fake story or act was involved.

In the early 1960s, my grandparents shared space on a flight to Dayton, Ohio, with Jack Nicklaus, Arnold Palmer and Gary Player. My grandmom brought me, then in my early teens, all three signatures on business cards. I still have them in a frame. One says “Best Wishes Mike,” the other “Mike, Best of Luck” and the other “Mike, Best Wishes Always,” followed by their names. That’s where I got my often-used autograph salutations.

Coincidentally, several months back I did an appearance with Jack Nicklaus and showed him the 45-year-old signatures. He not only agreed they were authentic, but was enamored at the very fact that I had them. He said they must have been obtained on a plane when they were headed to play Firestone in Akron. I won’t go into the value he put on them in today’s market. The point is, I was an excited kid, the one getting the autograph.

Then at some point back in the late 1970s to early ’80s, the sports memorabilia industry came to life and the autograph, as we once knew it, was history. Unfortunate, yes. No longer would young Mikes have a chance to appreciate three business cards signed by three famous golfers in the same way ever again.

Fortunate, yes. Old Mike has made a couple million he never counted on. Companies like Upper Deck sprang up and paid celebrity athletes megabucks for exclusive rights to signatures on products. Dreams Inc. specializes in creating unique sports- and Hollywood-related items designed specifically for signatures of famous people to be mass marketed. There are scads more. None of the product has value without the authentic celebrity signature. I ask, isn’t the provider of the value, the signature, entitled to a piece of the profit?

I just returned from Cooperstown and the Hall of Fame induction ceremonies. It happens every July in the quaint little town in upstate New York. What once was a gathering of baseball fans for a once-in-a-lifetime experience of seeing the Hall museum and the enshrinement festivities is still that for some.

But for many, it is memorabilia heaven, a chance for vendors to stock up on product, for collectors to expand their collections. And somewhere, lost in the crowd must be little Mike who just wants a memory. That is the sad part of it. Hall of Famers, including me, packed into a house, sitting behind tables selling autographs. Sad. That little guy who, along with his father, had a chance to meet and get an autograph remembrance of the moment spent with his hero, is gone. He’ll most likely never again get that experience without paying for it.

The autograph might be the most sought after commodity in today’s society. Even the targets want them. Yogi Berra, Gaylord Perry, Bob Feller, me, even Sandy Koufax getting signatures from friends to auction for a charity back at home. When will it end? Never, as long as there are famous people and a demand for the John Hancock.

I’ll be perfectly honest, I hate playing the cat-and-mouse game with collectors on the street. It was one of the reasons I retired early. Being targeted and stalked everywhere by people seeking a chicken-scratched slash on an inventory item is not fun. I’m not saying I’m a victim of paparazzi, but when airline luggage handlers wait for you in airports, your right to privacy is gone.

So here’s my quandary: I feel sorry for little Mike, he’s been squashed in this mess, I can’t tell which one he is in the crowd of collectors who all claim to be him. On the other hand, I like that my signature has value, and that I’m paid well just to sign my name. I can’t decide whether to sign freely on the street and hope that little Mike is in the crowd, or refuse because most of them are collectors or working for dealers and sign only in a controlled environment, where both sides understand the industry parameters.

Honestly, what has happened is ugly. Our society has become so callous, rude, and motivated by money that even something as American and simple as shaking hands and signing a baseball for a young person can seldom occur today. Who would have thought that back in Omaha in 1970 my excitement over autograph No. 1 would have led to this?

Njjayhawk, thanks for sharing your own personal J-Hawk autograph story. It brings back fond memories of when I was a "wide-eyed" sports fan cherishing any autograph or personal sports memorabilia I could get my hands on. Best always from another "die-hard" Jayhawk. :)

Not only is the hunt for autographs out of control, but so are the prices. Dealers will set up private signings where a mediocre player will cost $25 per sig. Traveling shows featuring hall of fame athletes might set you back $75 to $250 just for one autograph. And if you want an inscription, that's another $20. It's beyond insane.

My first autographs came from Royals games I attended with my dad in the 1980s. I clearly remember Steve Balboni holding his child in one arm while he signed my scorecard with the other. Dan Quisenberry and John Wathan signed for everyone. Bo Jackson would sign for all the kids, but casually avoided adults with bags of baseballs. Bret Saberhagen carried boxes to his car to pretend he was busy and avoid us. :)

Autographs are ridiculous these days with adults but I think kids are entitled to autographs...they want the autographs of their heros and it means so much to them, how could any HOF turn a kid down?

I agree that autographs have gotten out of hand. It's a shame that people who bring multiple items for an athlete to sign and then turn around to sell them on e-bay ruins it for everybody. I have collected autographs since I was a kid and only get autographs for my own personal collection. Unfortunetly, being an adult now, I get grouped into the same category as autograph seekers who do it for money and could care less about sentimental value of that autographed item. With that being said, I understand why athletes are hesitant to sign autographs for people who are going to turn around and sell them, why make money for someone else when you're getting nothing out of it? What I don't like are the athletes that turn down kids. One recent instance was at the Bill Self basketball camp in June. After the game of the former Jayhawks versus the current Jayhawks, Cole Aldrich was standing on the court talking on his cell phone. There was a kid about 8 years old there with his grandparents standing to the side waiting for Cole to complete his call so the kid could ask for his his autograph. The ball this kid had was a cheap rubber basketball, clearly something he had played with on the playground before so you know this kid wasn't going to turn around and sell it. Cole gets off his phone and starts walking to the exit of the gym, this kid clearly ask Cole for his autograph but Cole just walks right by him and acts like he isn't there and walks out the gym. That's what I don't get about some of these athletes is that they don't realize little kids look up to them and once these athletes get to a certain status, they think they're above it. Not trying to say Cole is a jerk or anything because i've never met the guy but it's always disappointing when you see a situation like that happen.

For all the moments like the one stated on Cole there are ones where they take the time to sign for fans. My son was getting autographs of the KU team this past season after a road loss of about 20 points to Texas Tech. Not only did all the players and coaches sign his ball, some of them took the time to take a picture with him. One of those was Cole Aldrich. So these guys are not always perfect but they do at times take the time to make a little 8 year old kid feel good.

A few years ago I was at a pro workout for baseball, trying out. One of the coaches decided to open the gates for the kids to watch us. The kids went around asking us all for our autographs. Most of us were nobodys but some had been to the majors before. I'll never forget the feeling I had of a little kid asking me for my autograph and being so happy to have had a kid asking me to sign a baseball for him. Later in the workout, 1 player I was hanging out with refused to sign an autograph for a kid because he already signed 1 for him and that was it. I thought it was disrespectful to the game and the little kid we used to be for him to deny a little kid an autograph, when it costs us nothing. Plus, who were we? We were nobodys.