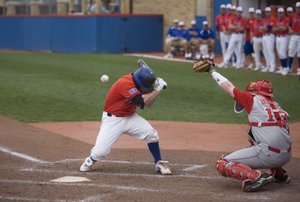 wow, first time in 12 years winning a series against NU. Our non revenue sports normally get their tails kicked against the 'Huskers...but this time, the baseballers did us proud.

Let's get at least one win down in Norman this weekend....and then it's on to Mizzou. i know we can win that series.....gotta start putting it altogether now.

I'm real impressed with this KU baseball team. I'd like to see them in the College World Series!

Great job! Not sure why we would wear the red unis against NU tho.

Puggy To irritate them. Never pass up a chance...

Way to bounce back from Friday's loss to take the series.