Kansas head softball coach Tracy Bunge will retire after 13 seasons as the leader of the Jayhawks. 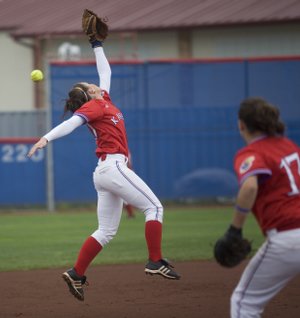 Tracy Bunge’s decision to retire as Kansas University’s softball coach isn’t likely to cause any defections.

“I don’t think so,” KU sophomore Allie Clark said. “I think we all have a tight bond and really like it here.”

Clark, who hails from halfway across the country in Hesperia, Calif., will return and play under a new coach.

“I’m just thankful for Bunge giving me the opportunity to come to Kansas, because I love it here,” said Clark, who leads the Jayhawks in home runs and RBIs. “I can’t thank Bunge enough.”

Bunge told her players Friday night she wouldn’t be returning for a 14th season, that she was retiring from coaching and planned to pursue other interests.

“I was really surprised,” junior Amanda Jobe said. “I had no idea she was thinking about other things.”

Jobe wasn’t the only one.

“I was really shocked,” junior pitcher Sarah Vertelka said. “I just wish her the best of luck in whatever she does.”

Added senior Val Chapple: “We were all a little shocked. I’m just happy she recruited me and brought me here.”

Still, the players knew Bunge was in the final year of a three-year contract awarded after the Jayhawks won the Big 12 tournament in 2006.

Whether the contract expiration had anything to do with Bunge’s decision may never be known. So far, Bunge has declined to talk about her motives.

She said Saturday evening she would discuss her reasons for stepping down following Sunday’s game. However, she deferred again, saying she didn’t want to detract from Senior Weekend.

In addition to Chapple, seniors Val George, Elle Pottorf, Stevie Crisosto and Dougie McCaulley were honored along with their parents in a brief ceremony following Sunday’s 11-8 loss to Baylor.