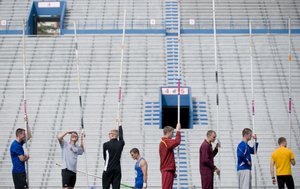 “I feel old. No, I feel really good,” the 30-year-old Russell quipped. “It’s good to come out here every year, and there’s always a huge turnout. I’d like to believe it’s for me, but I think it’s for everybody else too.

“It was a good start to the season because I’ve had a lot of injuries in the last year, and I’m still carrying them. It’s not where I want, but it’s good.”

Russell, who wore a black baseball cap backward, called for rhythmic clapping from the fans before each of his throws in the preliminary round, then in a move of great sportsmanship, did it for every competitor in the finals.

“It makes it a lot easier when you’re having fun out there and able to relax,” Russell said. “I’m out there to enjoy myself.”

Russell placed 10th at the 2008 Beijing Olympic Games, never forgetting the opportunity to mingle with star athletes like LeBron James and Ronaldinho in the athletes’ village. His injured knee buckled on the final throw at the Games.

Some other notable performances Friday:

• Former KU All-American Crystal Manning, the triple-jump runner-up at the 2009 U.S. Indoor Championships, won her specialty with a mark of 44-7. Competing unattached, she beat Thomaida Polydorou, who had a leap of 41-21⁄4.

• KU’s Stephanie Horton won the women’s shot put with a throw of 50-91⁄4. The senior from Tigard, Ore., defeated teammate Emily Reimer, who threw 49-81⁄4. Both Horton and Reimer had qualified for regionals prior to the Relays.

“I’ve competed against all of these girls before. We’ve seen each other all season so we have camaraderie,” Horton said.

“I was able to get my personal record, and I haven’t been able to do that for a while,” Pistora said. “We came here last year, and I didn’t do well, so I was trying to redeem myself today.”

• KU’s Kelsey Erb tied for second in the high jump in 5-7. Erb had the same mark as the winner, Lindenwood’s Tako Niare, who won on fewer misses.