Fast out of the gate

Kansas decathlete Corbin Kratovil, in blue, sprints with the pack in the 100-meter dash of the decathlon. Kratovil placed fifth in the event on Wednesday at Memorial Stadium. He stands in second place overall in the decathlon with 3,512 points after the first day.

The 2009 Kansas Relays are underway. The men's decathlon and the women's heptathlon fired off the gun this morning at Memorial Stadium. 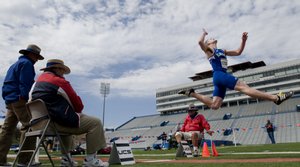 Kansas decathlete Corbin Kratovil takes off past meet officials Gilbert Castillo, left, Edward McKernan and Steve Saia as he plunges to the pit on his final jump in the Men's Long Jump event of the decathlon Wednesday, April 15, 2009. 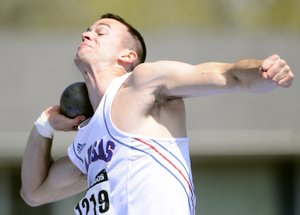 Kansas decathlete Jacob Breth prepares to release as he competes in the Shot Put event of the decathlon Wednesday, April 15, 2009.

Have you ever attended the Kansas Relays?

There was no snow, and winds were not unbearably heavy, so in that regard, Wednesday was a good day to be a competitor in the Kansas Relays in the eyes of KU decathlete Corbin Kratovil.

“I’m from South Dakota, so during this time of the year our tracks are covered with snow and the winds are 50 mph,” said Kratovil, a freshman. “So it’s pretty cool being in this stadium and this atmosphere.”

Kratovil won the men’s shot put with a throw of 12.65 meters, finished third in the long jump, tied for third in the high jump and fifth in both the 100-meter dash and 400-meter run to total 3,512 points. Minnesota’s Joey Schwecke leads the event with 3,728 points.

KU’s Jacob Breth is in fifth place after Day One, totaling 3,380 points after concluding Wednesday’s action with a victory in the 400.

“If both of them can continue the pace they’re going on now (and) finish the same way they finished up today, I think it would be excellent,” KU track coach Stanley Redwine said of Kratovil and Breth.

Asked whether he thought one of his athletes had an edge over the other heading into the event’s final day, Redwine smiled.