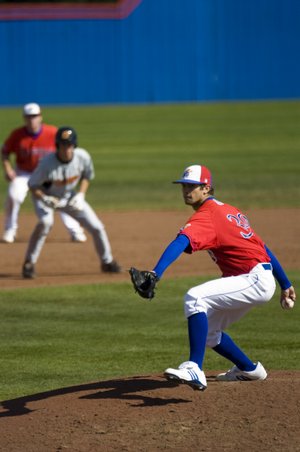 Perhaps it’s the home crowds providing extra juice for the players on the field. That’s what catcher Buck Afenir thinks.

Then again, it could be the completion of the brand-new McCarthy Family Clubhouse that has put some swagger back into the Jayhawks’ program. That’s what KU coach Ritch Price thinks.

The answers vary. The results do not. After bucking the Oklahoma State Cowboys, 13-6, at Hoglund Ballpark on Saturday afternoon, Kansas now stands a robust 17-2 at home.

Contrast that with the Jayhawks’ 5-10 record on the road, and it’s easy to see why everybody in a white, crimson and blue uniform enjoys the cozy confines just a little bit more.

One could try pointing to scheduling as a factor in the record disparity — KU has played eight road games against nationally ranked teams. But it’s not as if the Jayhawks are racking up cupcake victories against the Little Sisters of the Poor at home. Wins at Hoglund include: a three-game sweep of then-No. 1 Texas, victories against then-No. 7 Baylor as well as in-state rival Wichita State and now two straight to begin the series against No. 17 Oklahoma State.

Saturday, Walz relished taking the Hoglund mound so much that he struck out a career-high 10 hitters one day after KU ace Shaeffer Hall mowed down a career-high nine.

“We’ve always known that he had the stuff to be a great pitcher,” Afenir said. “He just had to put it all together. He’s doing that now, and I think that’s just awesome.”

The Jayhawks received key contributions from the top of their lineup to back up Walz’s solid pitching performance. David Narodowski, Robby Price, Heere and Afenir — the Nos. 1 through 4 hitters — had 10 of KU’s 13 hits.

Heere smacked a solo home run to right field in the bottom of the third, snapping a 2-all tie. Kansas then plated four runs in the fifth to go ahead, 8-2, and four more in the seventh thanks to Heere’s three-run double to left field with the bases loaded.

“He’s got surprising power for a little guy,” Price said. “I thought that was a great at-bat.”

Kansas has outscored Oklahoma State, 21-7, in the series.

“Just knowing that you can go out there and not be perfect and still come out ahead is huge,” Walz said.

“We’ve already won the series, but we’ve got to come out and play the same way (today),” Heere said. “It’s huge to sweep a team in a conference as tough as the Big 12.”