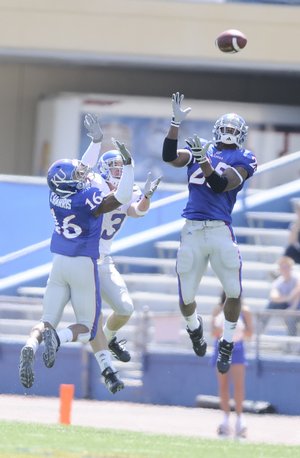 “Kale, he got a little wound up out there,” said Mangino following the game. “I had to have a talk with him and settle him down. I said, ‘It’s practice. It’s just practice.’”

“What’s that guy say all the time?” he continued, before delving into a rough but thoroughly enjoyable Iverson impersonation. “It’s practice! It’s not a game; it’s practice!”

“The huddle was pretty exciting,” admitted the Dodge City native, who is battling for the No. 2 quarterback spot this year after red-shirting last season. “I don’t know if any of us had that much experience, so we were all juiced up, ready to go, excited.”

Pick finished the day 16-of-26 passing for 154 yards with a touchdown and an interception, while working with both the White and the Blue teams. He also rushed 12 times for 29 yards, including a 17-yard scramble.

Incumbent starter Todd Reesing finished 16-of-22 for 221 yards and a touchdown for the Blue team.

Perhaps spurred on by the recent success of Kerry Meier, Mangino on Saturday announced the switch of another athletic quarterback to the receiver position in hopes of a similar result.

Third-year sophomore A.J. Steward, who arrived at Kansas as a quarterback and later moved to tight end prior to the start of the 2008 season, will play next season as what Mangino calls a “little Y” receiver.

Senior cornerback Justin Thornton, who started 12 games last season in the Kansas secondary, was replaced in the starting lineup Saturday by Anthony Davis.

It was unclear if the demotion was a result of Davis' development at the position or a disciplinary action stemming from Thornton’s late-season suspension in 2008. Thornton was held out of the team’s Insight Bowl game against Minnesota after violating unspecified team rules.

Jamal Greene, who was held out of the early portion of spring practice for violating team policy, also did not start the game with the first-string.

Justin Hartwig, the starting center on the 2009 Super Bowl champion Pittsburgh Steelers, was honored at halftime of Saturday’s game.

Damn!!! How many violations of "team policy" can we have before the season actually starts?!?!

quigley looked good at linebacker but sometimes lost at times and got yelled at after Lewis ran for about 20 yards on them. Didnt pay attention to the others, was too busy wondering why Briscoe cant let his NFL thoughts wait one more year

He didn't "honor" Kansas by naming his high school during a Super Bowl intro ...

It wasnt his high school. It was his elementary school. I didnt clap.